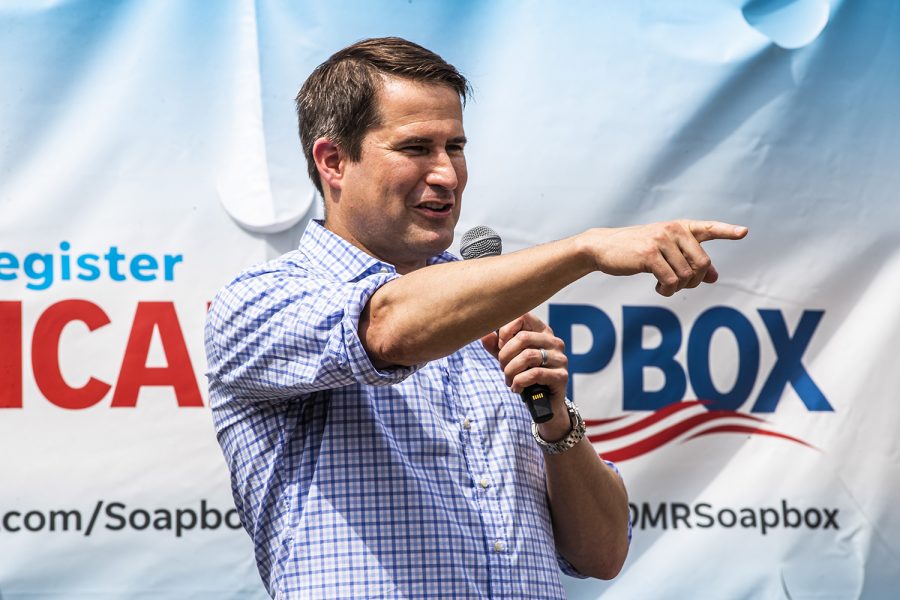 DES MOINES — Rep. Seth Moulton, D-Mass., spoke to Iowa State Fairgoers with a story about a recent speech he gave at a factory in his district, where a woman asked, “Who are you?”

Moulton, the last of more than 20 Democratic presidential-nomination candidate to take the Iowa State Fair’s Des Moines Register Political Soapbox stage, said that experience taught him to introduce himself before diving into the issues, so he decided to tell the audience who he was and why he was running for president.

Moulton served four tours in Iraq, and one question he received from Marines was why they were risking their lives for a war that Moulton said shouldn’t have happened. He said the American people are asking a similar question of what does it mean to fight for a country that doesn’t uphold their values and follow leaders who they can’t trust.

The answer is the same for both questions, he said: “We fight to uphold the values that our leaders are failing to uphold themselves.”

U.S. Rep. Seth Moulton, the last of 23 candidates to participate in the Des Moines Register Soapbox, has taken the stage. pic.twitter.com/ERZaT03SVA

In the presidential election, Moulton said, he is fighting for basic human rights, such as the right to health care and a women’s right to choose. He touched on gun safety, saying that parents have the right to know their kids won’t be shot at school. Another basic right he mentioned was people of color not being persecuted by a “white-nationalist administration.”

Moulton called for the impeachment of President Trump, prompting cheers from the audience.

“We fight in 2020 for justice, because justice means justice starts at the top,” he said.

When speaking about defeating Trump in the election, Moulton said that in order to win, Democrats need to unite and turn out to vote, and independents and “disaffected” Republicans need to be brought in as well. He said he is the candidate to bring everyone together.

One audience member asked about climate change, and Moulton responded that the U.S. needs to become the leader in combating the climate crisis, which would include using American-made technology and growing the economy while still addressing the issue instead of raising taxes. He also mentioned developing fusion power and decarbonization, along with developing the Federal Green Corps, a service organization that would work to protect the environment.

“It is time for a a new generation of leadership in america,” Moulton said. The generation that will have to deal with the consequences of the decisions politicians are making should be involved involved in them.

Regarding the country’s debt and tax reform, Moulton said it’s important that the system is fair, so people pay the taxes they owe, which he said would secure $500 billion in revenue a year. Under his tax-reform proposal, he calls for “staffing up the IRS” to generate revenue from “those who fail to pay their fare share” — those who are identified in his plan as “tax cheats,” or millionaires whom he says the IRS does not audit.

However, he said that doesn’t mean pitting rich people against poor people, because becoming wealthy is something people strive for.

In response to an audience question about health care, Moulton spoke about using the Veterans Affairs health-care program after coming into office, and addressed the positives and negatives of a single-payer system. He said competition is key for better health care, and that there should a public option that is better than Medicare that would compete with private companies.

Indianola resident Steve Richardson said he liked Moulton’s message about the negatives of a single-payer system, and asked how creating competition would bring prices down.

“The bottom line is you need to have a system that’s going to be workable for those who have private insurance and those who are on government assistance,” Richardson said.

At the Veterans of Foreign Wars Department of Iowa booth in the Varied Industries Building, Moulton is speaking with veterans about the work the department does. pic.twitter.com/ixvHAajwu7

Washington resident Nathan Groff, a veteran, said he liked what he heard from Moulton about his military service.

“Somebody who’s been in the military, who’s had that background, it’s valuable,” Groff said, adding that the experience is valuable whether someone has served or understands it through working in the government.