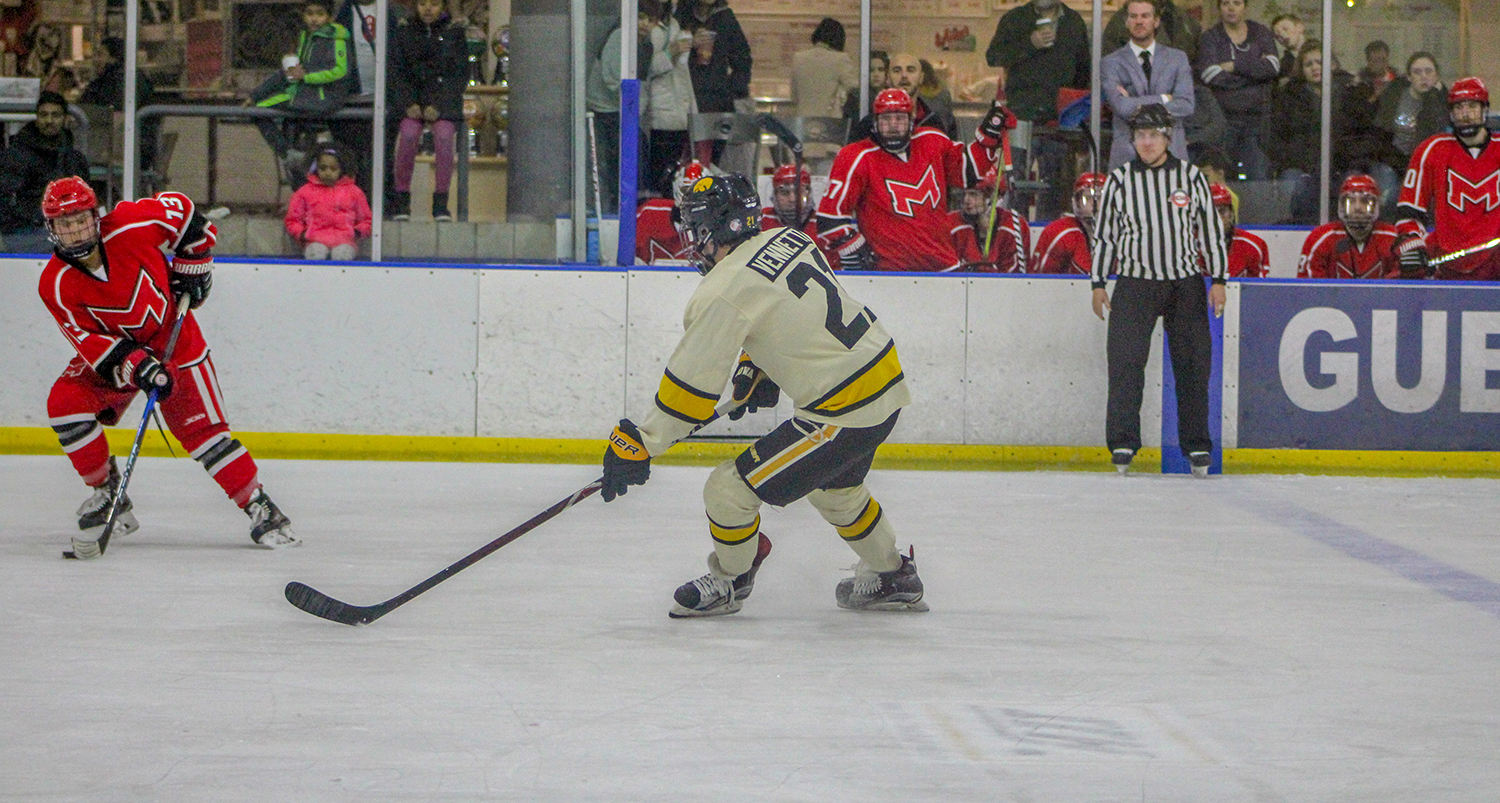 Jake Venetti takes the puck towards the Maryville goal during the game on November 30, 2018. (Megan Conroy)

Jake Venetti takes the puck towards the Maryville goal during the game on November 30, 2018.

For Iowa’s hockey club, what’s more powerful: the rush of the game or the repercussions of the injuries?

Concussions can be lifelong, devastating injuries, but the thought of not returning to hockey can be even more devastating for some lovers of the game. But what draws Iowa’s hockey-club players to the sport despite the risks?

During a high-school hockey game, Shane Cassidy’s eyes opened to fluorescent rink lights shining brighter than the sun and a blur of coaches standing over his head. Moments earlier, in goal, Cassidy had been charged by an opposing player at a speed fast enough to not only take him off his feet but smash the back of his head against the crossbar of the goal on the way down. He could not remember the play that had just occurred in front of him.

This was not his first concussion, but when he woke up, he knew his next few weeks would be full of doctors’ visits, lying in a dark room, and no electronics. After regaining his composure, Cassidy was taken to be medically evaluated. Now, three years after the incident, Cassidy feels well-versed on the subject of concussions. The benefit, he said, is that he can notice possible concussions in his teammates on the bench after they have been hit on the ice.

“If they aren’t acting right, if they’re very out of it, and they’ve just been hit, it’s easy to spot,” he said.

Now 18 years old and a freshman at the University of Iowa, Cassidy plays for the Division 2 hockey club. The team, comprising 26 members, practices two times a week during the year and currently plays games at the Coral Ridge Mall. Cassidy has played hockey since age 2 and started playing goalie at 5. In his hockey career, he has dealt with three concussions, none this past season.

“It’s hard to tell if I still feel the effects of my concussions, but in high school, it was harder to focus immediately after,” Cassidy said. “I adapted to the symptoms and noticed as they had dissipated.”

This story, and many like it, are almost as popular as penalty minutes and seemingly as prevalent as goals in high-school hockey. According to Complete Concussion Management, an organization focused on the treatment of traumatic brain injuries, concussions account for 23 percent of the injuries sustained in high-school hockey, and almost 50 percent of hockey concussions go unreported. As in other sports, after one concussion, athletes are more susceptible to additional concussions. The majority of hockey players develop a love for the game at a young age and play throughout childhood and into college.

From the moment he stepped onto the ice from the first time, Cassidy knew that he would do this for as long as he could. He played hockey and baseball until high school, but he truly found his passion in hockey. He has played for 16 years, meaning 16 years with the possibility of concussion. He, and all players, plays the game knowing the risks.

Cassidy’s teammate, Iowa left-wing Jake Venetti, 20, has experienced four concussions in his career. He sustained two of them in the past two years playing at the university. Venetti said he’s lucky none of these concussions were very serious, but he also went through the proper treatment.

For most players, treatment is frustrating and anxiety-ridden. A darkness falls over the players, literally and figuratively. The boys are instructed to sit in just about complete darkness for a week or longer to ensure the brain gets rest during recovery; they go screenless and definitely hockey-less. Medically, the darkness is to maintain minimal cognitive activity while healing. The urge to be on the ice is difficult to fight, making it even more difficult not to go back to the game before being fully recovered.

The D-2 hockey club has a protocol for traumatic brain injuries. Head coach Kevin Brooks, 36, said the team has a full-time trainer who handles all injuries.

“The kids must pass their tests,” he said. “Then be cleared by a university doctor before returning to game or practice.”

Brooks, a former Cedar Rapids Rough Rider, is no stranger to life-altering traumatic brain injuries. In his career, he experienced 10 documented concussions.

“I knew I was concussed if I was knocked out, experienced blurred vision, and if the trainers told me I was,” he said.

During a Rough Rider game, Brooks looked up to the scoreboard from the bench. He saw 1 point for the home team, 0 points for their opponents.

“Who scored?” he asked a teammate.

He couldn’t believe it, so he laughed along with his teammate.

“I don’t remember a whole lot,” he said. “Just that I scored apparently.”

To this day, Brooks sees a neurologist and therapists monthly and annually. In addition, he does exercises for memory throughout the day. He said he lives through the effects every day.

“Memory loss, confusion, difficulty in simple tasks,” Brooks said. “And I have battled things like depression on the mental side.”

Struggles with mental illness and in some cases addiction are commonly associated with post-concussion living.

A concussion ended Brooks’ career in hockey in 2004, which raises the question, Why return to the game to coach this team? Why does any player return to the ice after a concussion? Why do they continue this, risking their health? The answer is simple: the love of the game.

“My biggest advice would be to the high-school player: Don’t rush back over a concussion because you think a scout is there or a college coach,” he said. “If you’re good enough, they will find you, and you will get your shot. Your health is most important.” 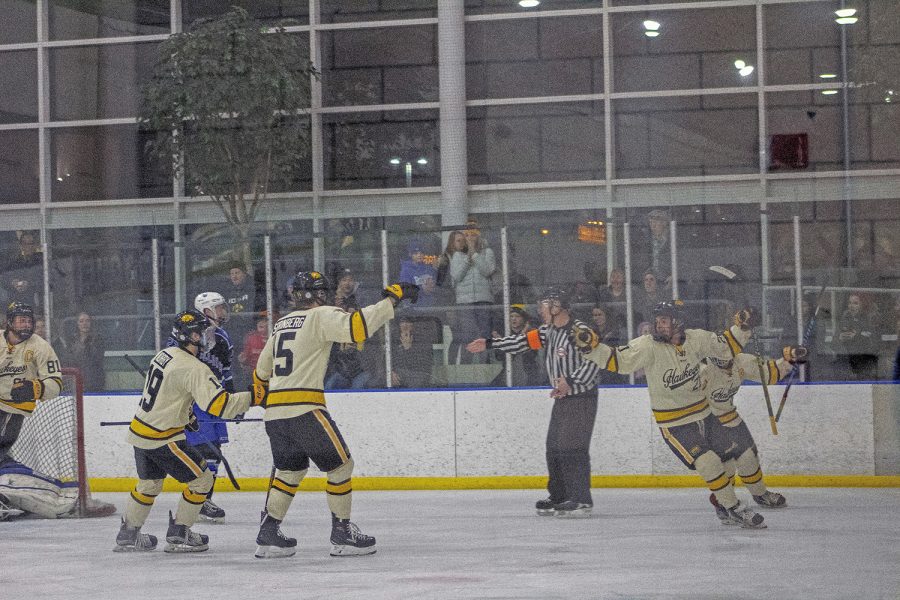