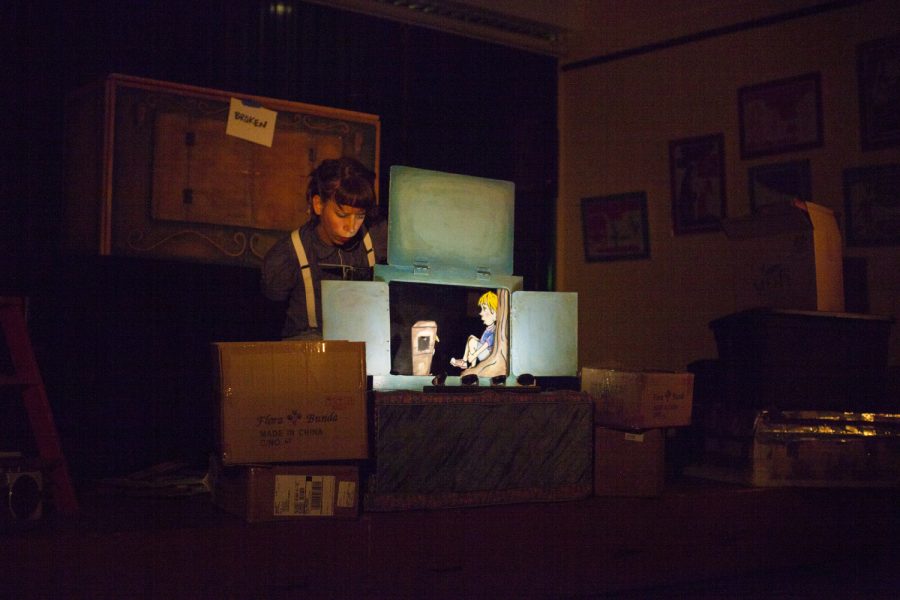 Pulling the strings: puppetry in Iowa

Puppets have remained a niche element of theater. Despite puppetry’s obscurity, several artists in Iowa have learned how to make a living bringing life to dolls.

On a stage stacked with boxes and suitcases, puppeteer Liz Howls pulls out a vinyl record, commencing the sounds of music box playing.

While she’s performing a one-woman show, she’s not alone. Accompanying her is a puppet with the head of a crow and a body of human.

Inside a space often used to entertain children, the room is filled with adults cast in darkness. Howls shows them her piece, “Music Box,” a tale of a woman seeking to fix her broken music box.

Click below to learn more about Liz Howls and her relationship with puppetry.

Prevalent in many forms of media, puppetry has been a staple in several franchises. Used in a vast array of entertainment such as The Muppets, Little Shop of Horrors, Avenue Q, and War Horse, puppets are effective tools in storytelling. With the use of their hands and shifting tone of voice, various types of puppet artists are scattered throughout Iowa, bringing life to the motionless.

Located in West Liberty, a small-blue building sits between various businesses in downtown. A painting of tree with various characters is displayed with the title Eulenspiegel Puppet Theater Co.

Monica Leo, the owner and founder of Eulenspiegel, grew up surrounded by puppets. Both of her parents were refugees from Nazi Germany. Her mother, a metal worker, contacted a craftswoman living in Germany who specialized with puppets. After the war ended, her mother ordered a set of puppets that Leo eventually inherited.

She graduated with a degree in art and a minor in English, wanting to do freelance work somehow. With her love of puppets, she began creating her own and selling them at art fairs. One of her friends approached her to put on puppet shows herself. Although she said she “did it for laughs” at first, her craft eventually brought her to start the theater.

Eulenspiegel has produced a wide variety of shows for audiences of all ages, many of them being based on folktales.

Sitting on the couch, Leo grabbed a soft-sculpted, tabletop puppet to demonstrate how he moves. He has a spring in his neck, allowing him flexible neck movement, along with a shoulder piece that the neck is hooked to. His head is made of papier-mâché, while his body is composed of cloth and stuffing.

“You can do an awful lot with a character like this that really has that one control,” Leo said while maneuvering him.

Leo said the biggest advantage of puppetry is how actors can into any character they’d like without limitations.

“I can play anything I want to because I’m not limited by my gender, my species, or my age,” Leo said. “If I were a human actor, I’d have a very small repertoire of roles I could play at my age.”

Leo focuses her work on telling a linear story for the audience, while others use puppets as an additional tool for standup performances.

Lisa Laird, a full-time ventriloquist based in Orange City, Iowa, said she blames her current profession entirely on her children.

When they were in middle school, her children were involved with organizing the puppet theater at their church. Once the director quit, Laird and her husband took over the position.

As he began working with the puppets, she realized how effective puppets were in telling stories, entertaining children, and getting their attention. She eventually went full-time with her ventriloquism and retired from teaching.

Since her career began, Laird has traveled all over the Midwest to perform in libraries and classrooms for children. Laird also uses her puppets for adult shows and women’s groups.

With kids, she said, the focus is more on the actions of the puppets as opposed to the dialogue, because children tend to focus more on the puppet’s movement. For adults, it’s more about the message, whether it’s comedic or something serious.

Using a puppet of an elderly woman named Grandma Dori, Laird is able to approach the topic of dementia and explain the importance of remembering one’s history to a group of adults.

Owning 22 puppets, Laird said bring they bring a dynamic to her show that she can’t have while performing alone.

“Basically, a ventriloquist is just a comedy duo, except you’re doing both the parts.” she said. “There’s just something about the extra dimension that makes what happens a little stronger.”

Puppetry is an art form that often requires collaborations with many different kinds of artists. For Laird, she’s responsible for the music, visual art, and writing the script.

“When you throw puppetry in there, you have the ability to use all aspects of art in one performance,” she said.

Often while Laird is performing, she said, her puppets will say something that she didn’t plan. In these instances, she said, the puppets have become a part of her brain.

Leo said she’s had similar experiences with her own puppets.

“I don’t assign them, they tell me what their personalities are,” she said. “If you’re working with more than one character, you’re almost physically using this different parts of your brain to do that.”

Loyce Arthur, a  University of Iowa associate professor of theater, teaches a course called Mask and Puppet Crafts, in which students have the opportunity to create diverse types of puppets.

Balinese puppets hang in her office, and Arthur said she’s intrigued with puppets all over the world.

While traveling in several different countries, she said, she observed how different puppets are used in separate cultures. Viewing dragon puppets in China to marionette puppets in Czechia, puppets can be used for rituals or entertainment depending on the culture.

“There’s something about seeing that that kind of storytelling where you know it’s not real, but you connect to it because of everything that it can do,” Arthur said. “Sometimes, you even forget that you don’t focus on the puppeteer, your focus goes on the being that’s telling the story, and it attracts us in some way.”

The increasing use of CGI in films has caused a decline in more traditional puppet uses. Arthur said the shift is entering a new medium of puppetry.

“You’re still creating this being that comes forward to tell you the story, and that’s what’s happening with the animation,” Arthur said. “It’s just much more complicated than what you would do with just a sock.”

Leo said she acknowledges how many people don’t take puppetry seriously as an art form, but not without good reason — there’s a large amount of bad puppetry. Being a profession in which many people can enter easily, she said, several puppeteers don’t take it seriously.

“If I had a nickel for every fake Muppet that’s out there, I could retire right now,” Leo said.

Developing a strong character separate from the performer is a crucial part in creating a strong ventriloquist act, Laird said, with the ventriloquists knowing how to establish themselves without moving their lips.

“When that puppet is just sitting there and has no life to it, and you can’t tell it’s a separate being from yourself, you’ve lost the illusion,” Laird said.

Every now and then, Leo said, she wonders when she’s going to retire, but then she recalls that her mother was still working on a metal sculpture when she died at 96. Remembering this, she said, she doesn’t see herself giving up on telling stories anytime soon.

“It’s just the combination I love,” Leo said. “I’ve always loved doing things with my hands. For me, it started as as a visual art. But I also really, really love telling stories, so I think I’d have a hard time if I had to give them up.”

For Laird, the most gratifying part of her career is when she returns to libraries and children approach her to talk about her puppets, whether they’re asking her how a certain puppet is doing or telling her they wrote a stories based on of her characters.

“To me, that’s better than any paycheck I can get,” Laird said. 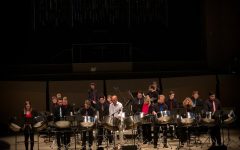 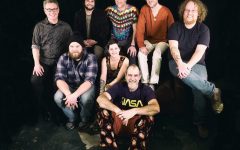 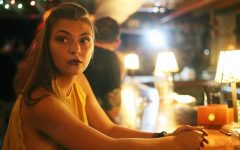 Harmonies, harmonicas, and homework: the life of Lily DeTaeye