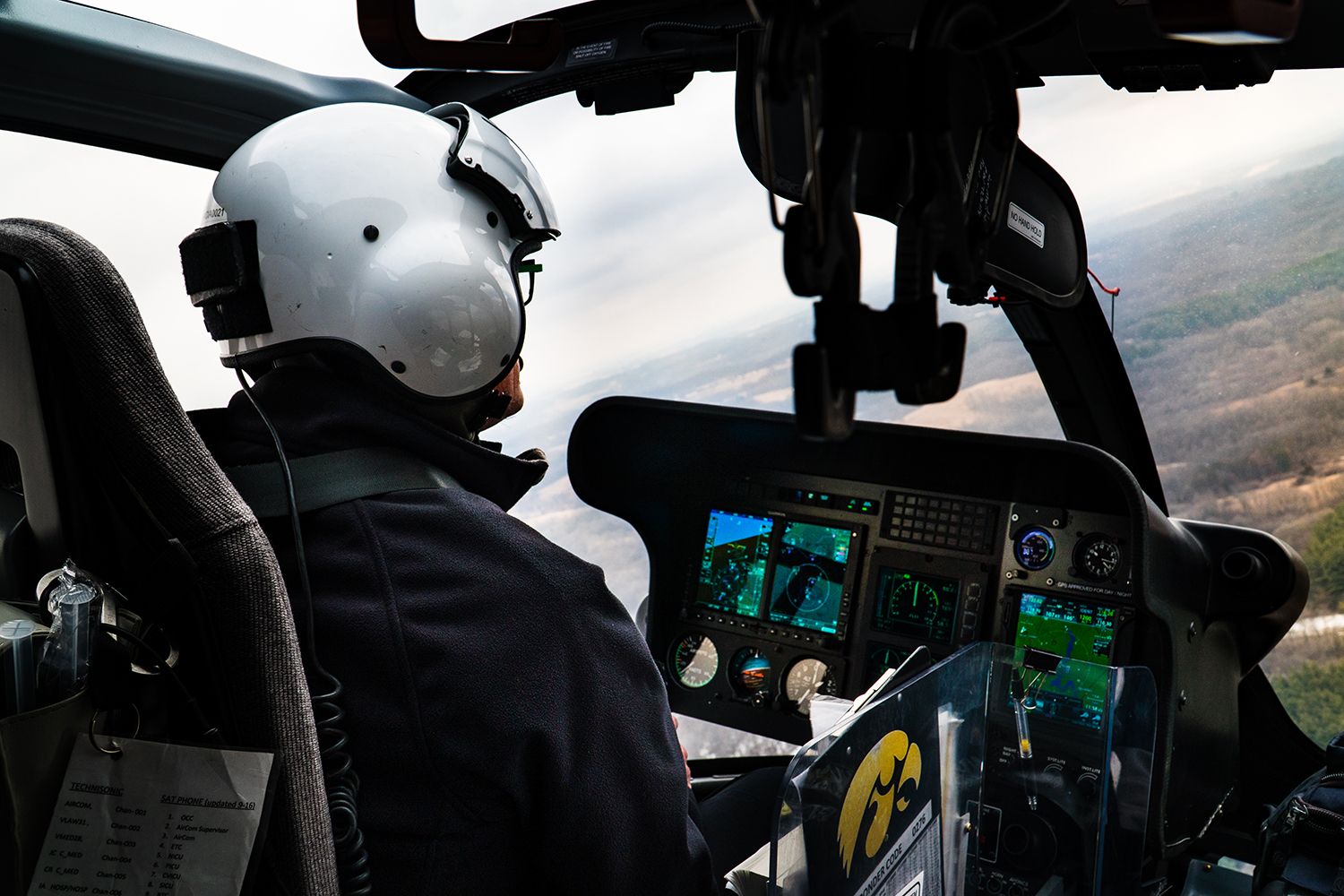 The University of Iowa Hospitals & Clinics' AirCare team takes around 800 flights a year. The average time from receiving a call to getting off the ground? Seven minutes.

The rotor starts up as Tim Whaylen sits at the controls in the cockpit, pushing buttons and flipping switches. The blades start to turn.

Whaylen, the lead pilot on the AirCare team at the University of Iowa Hospitals & Clinics, speaks to someone from flight control before he prepares the black and gold helicopter for takeoff.

“We have four souls on board,” he says. “We’re just going to go around Iowa City for about 20 minutes or so and land back here.”

This emergency helicopter is the fulcrum of AirCare. The team consists of almost 30 individuals, from pilots and mechanics to nurses and paramedics whose daily job it is to save lives that require transport by air. Daily Iowan reporters accompanied two staffers on a ride to get a sense of their daily perspective from the skies.

AirCare was established in 1979 and was the state’s first “air ambulance,” with three bases in Waterloo, Dubuque, and Iowa City. The fleet includes three helicopters and recently added an airplane.

Part of AirCare’s mission is to rapidly and safely transport high-risk and complex patients, from victims of trauma who may have suffered a serious motor-vehicle accident to critically ill newborns born prematurely.

The average time from receiving a call to getting off the ground? Seven minutes.

UIHC’s medical air-transport partner, Air Methods, owns and operates the aircraft. The Colorado-based private company is responsible for hiring and paying the pilots and handling operational costs. UIHC employs the medical staff who travel along with the pilots.

The great thing about EMS is you never know what your day is going to hold.”

In the cockpit, Whaylen explains that the helicopter is very agile and could rotate completely over if he wanted it to. He said the rule of thumb is to not tilt the aircraft past 30 degrees to keep a smooth ride. The 58-year-old pilot was born and raised in Granite Falls, Minnesota, and started flying helicopters in 1982 during his time in the Army.

“I was trying to earn some money for college, and I saw a helicopter fly over and thought it was really cool looking. I mentioned that to the guy who was in the paperwork division where I was stationed, and he said that I should go to flight school,” he said. “I was 19 years old. He gave me the paperwork, and I filled it out, and before I knew it I was in Alabama going to flight school.”

After leaving the Army, Whaylen flew for  emergency medical services in Minnesota before heading to Iowa City four years ago.

Whaylen knew he wanted to keep flying and helping people while doing it. He knew he didn’t want to be stuck in a routine.

“The great thing about EMS is you never know what your day is going to hold,” he said.

Pilots report to the hospital an hour earlier than the nurses and paramedics. Whaylen arrives at work,  pulls up the weather on his monitor, and looks at notices to airmen posted about daily cautions and flight-navigational risks.

After that, he checks the helicopter and conducts a preflight, making sure the aircraft is ready to fly. Next is the daily briefing at 7 a.m., when the rest of the staff arrives.

“We discuss the weather, any maintenance, any training, the status of our night-vision goggles, anything relevant to the day,” he said. “We usually have a daily safety topic that we discuss. Then once we are done with that, we start waiting.

“You never know what a standard day is. Somedays, you come in, do your briefings, and that’s it. You don’t really do anything all day, you never turn a blade. Then other days you are just flying, flying, flying all day. You just never know.”

Steve Schultz, a flight nurse with AirCare, agreed that there is no standard day on the ninth floor of the hospital, where AirCare is stationed.

“You never know what’s coming,” he said. “That’s what I love about it. It’s a challenging situation.”

Schultz grew up in Cedar Rapids and has been at UIHC since 1995. He started  flying with AirCare in 2000. While nurses and paramedics don’t have a role in controlling the aircraft, they do assist in watching for potential obstacles.

Schultz became interested in the medical field when he was in high school.

“One of my friends fell off a rope swing and got airlifted, and that’s what sparked my interest,” Schultz said. “A few years later down the road, I became a paramedic, but I wanted to do more. I always thought flying would be a great job.”

When a tornado hit Iowa City in April 2006, Schultz was part of an AirCare team coming back from Clinton, Iowa, with a patient on board. With the weather becoming increasingly dangerous and the wind speed picking up, the team had to make a choice.

You never know what’s coming. That’s what I love about it. It’s a challenging situation.”

“We had to divert down to Washington and come up by ground,” he said. “You have to be able to think critically, and evaluate situations, and make the best choice you can. This work goes with my military training in the Marines. It’s about adapting and overcoming.”

While Schultz is a veteran member of the team, others have recently joined AirCare.

Caroline Maliske, a neonatal/pediatric flight nurse, has only been a part of the team for around eight months. She works with infants, most of them premature.

Growing up in Minneapolis, Maliske volunteered in a children’s hospital and said being a nurse always seemed like a good fit for her.

“I always knew I wanted to work in peds,” she said. “I recently moved here, and this job was very intriguing to me. Something that would push me to get better as a nurse.”

The neonatal/pediatric flight nurses also make rounds in the Stead Family Children’s Hospital. They assist with IVs or procedures.

“Depending on how many calls we get, some days are really busy,” Maliske said. “We can be out all day transporting. Otherwise, we are hanging around and helping with critical situations that come up in the Children’s Hospital.”

Maliske said as a nurse, she gets to be independent in making decisions.

“There is not a physician with you on the transport, typically,” she said. “So you’re making the calls, these critical decisions in the moment. It pushes you to get better, and to think on your feet, and to anticipate what’s going to be next. That’s one of the main reasons I wanted to do this job. I’m learning new things every day, every transport I go on.”

Not every transport has a happy ending, and this dire reality is one of the most challenging aspects of the job, said almost every member of the team.

“My first transport off of orientation was a very sick kiddo,” Maliske said. “Unfortunately, it’s been one of my lower moments of the job. We did everything we could, but she ended up not making it. That was my first one on my own, too, so that was really devastating.”

Maliske said that the happy endings are what make the job worth it.

“There have been many instances where the babies do so well and after, you see them, and they are getting discharged from the hospital, and that makes it all worth it,” she said. “When you see the parents and they recognize you and thank you for what you did.”

Kirsten Jordan, another neonatal/pediatric flight nurse from Omaha, is the newest nurse who joined the team in August. Prior to being in AirCare, she was in the pediatric intensive care unit as well as the neonatal ICU. She said she put the two aspects of those jobs together when she joined AirCare.

Jordan said she has found her calling on the AirCare team.

“The critical thinking challenges you every day,” she said. “I have to think quickly and act on it. When you see a family member crying and tearing up, and then you follow up a week later and they hug you … that’s the best feeling. I leave my family every day so I can come here and help somebody else’s.”

Jordan said she also gets the chance to help with deliveries at the hospital in her AirCare role.

“I kid you not, I tear up at most deliveries,” she said. “That’s the most beautiful thing, when a baby is born. There’s all this emotion, and pain, and everything, and then this sweet, angelic thing is born. It might still need help breathing. It might need glucose. It might need numerous things, but the fact that I have the confidence and the skill set to assist with that baby and help that baby out on their birthday. There are no words for it.”

Flight paramedic Christian Swangel said working for AirCare is everything he has wanted to do since his days as a volunteer fireman and EMT. Now 49 years old, he is doing what he loves.

“Working here is a dream job,” he said. “Patient care can be a challenge. Some of the trauma patients that we deal with are wounded pretty bad. A lot of the sick patients that we transport are very sick. That’s a challenge to get them here alive sometimes, but it’s very rewarding when we do. That’s why we do what we do.”

Lead pilot Whaylen has seen a lot of trauma and sickness in his 27 years flying EMS. He said he has experienced many interesting flights, but he also remembers the tragic ones.

One moment Whaylen distinctively recalls inspiring one patient in need of care to become a caretaker herself.

Whaylen was in flight from Duluth, Minnesota, to Cedar Rapids, dropping a patient off and heading back when he received another dispatch.

“They asked if we had enough fuel to go back to this little town to pick up a girl who was helping her dad process a deer and got her hand stuck in a grinder,” he said.

Whaylen flew the girl to the hospital, the grinder still attached to her arm because staff was hoping to save her elbow.

“She was a young girl, 13,” he said. “Difficult time for any kid and to have something like this happen to her, you always wonder how people end up.”

This was a memorable case — but Whaylen later discovered what happened to that young girl. Years later, he was flying with a young paramedic, and as he shared the story, the paramedic’s mouth gaped open.

“He told me that he had been working in the Cities, and he had a nurse manager that he had worked for who had a prosthetic arm, and she had lost her arm processing a deer with her dad,” he said. “It turns out the experience for her drove her to become part of the medical community.”

After the helicopter lands back on the UIHC’s helipad, Whaylen shuts down the aircraft, and he and nurse Schultz take off their headgear and step out. They start heading down the ramp toward the AirCare office ready for whatever comes their way the rest of the day.

“There are lots of not so great [moments], but to be a part of this team is beyond belief,” Schultz said. “I pinch myself every day coming in here just knowing I get to do this job.”

Photos: Fly through the air see photos of Iowa City from the sky. 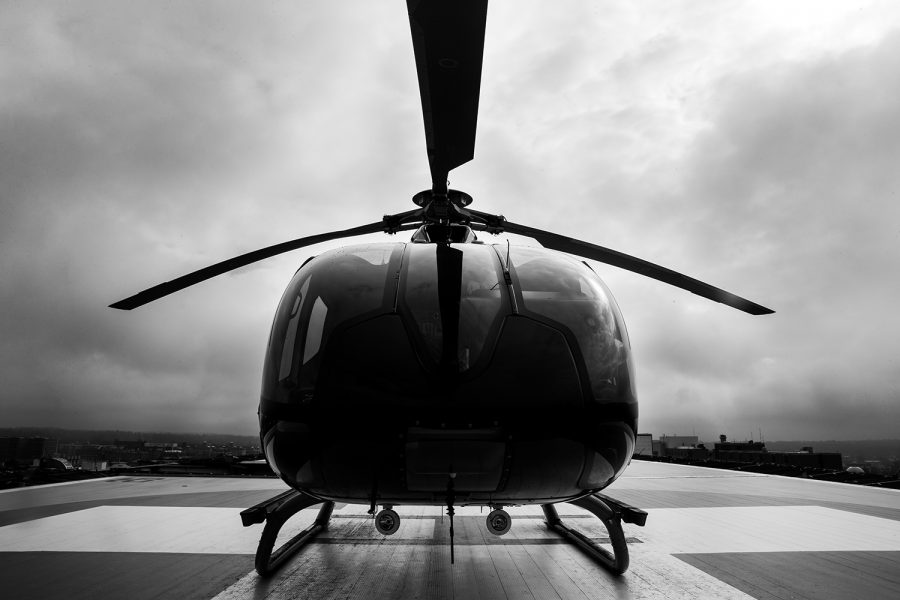