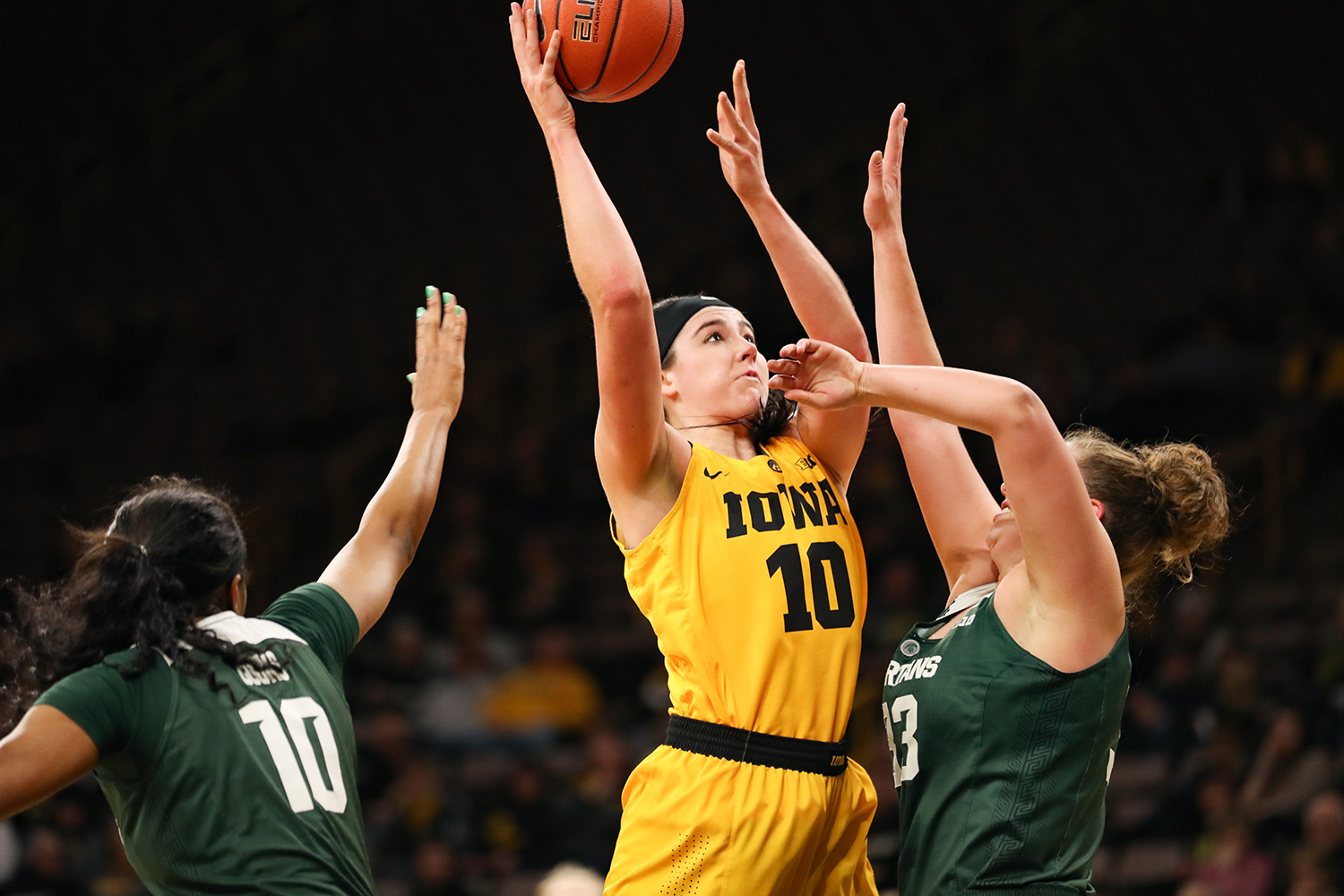 Iowa forward Megan Gustafson (10) fights for a layup during a basketball game against Michigan State on Thursday, Feb. 7, 2019. The Hawkeyes defeated the Spartans 86-71. Gustafson led all scorers with 41 points. (David Harmantas)

Iowa forward Megan Gustafson (10) fights for a layup during a basketball game against Michigan State on Thursday, Feb. 7, 2019. The Hawkeyes defeated the Spartans 86-71. Gustafson led all scorers with 41 points.

Megan Gustafson reflects on humble journey to domination, as her Hawkeye tenure comes to a close

What would a showdown between Iowa basketball stars Megan Gustafson and Tyler Cook look like?

A couple weeks ago, Cook suggested on Twitter that Gustafson would certainly best him one-on-one.

Most of Gustafson’s basketball life before eighth grade consisted of her playing with, and beating, boys. Up in the small town of Port Wing, Wisconsin, it’s common to see a coed basketball team with kids in sixth grade and below. However, Gustafson’s eighth-grade year was a bit of an anomaly.

“We didn’t have enough girls that year to form a girls’ team,” Megan’s father, Clendon Gustafson said. “So Megan played with the eighth-grade boys. Not only that, but she ended up being good enough to start.”

I might let you score a bucket or two ? also, please teach me how to dunk thanks!

She not only started, she dominated.

With her show of prowess against middle-school boys, Clendon Gustafson realized he might have an extraordinary basketball player for a daughter.

“There are very few eighth-grade girls who can muscle and play with the boys,” he said. “So I thought then, ‘That’s something special there.’ ”

Gustafson finished that season as the team’s second leading scorer, but her lasting impact was her physicality.

“One time, another coach said I was being too rough on the boys,” Gustafson said. “I think they knew I could compete because they never took it easy on me. That’s something that I appreciate to this day.”

That’s when Gustafson realized she had a chance to turn a basketball hobby into a lifestyle.

From then on, Gustafson has turned herself into arguably the greatest Hawkeye basketball player to don the Black and Gold. Her impressive Iowa career will be celebrated, along with the two other seniors in her class, on Senior Day this Sunday when the Hawkeyes take on Northwestern at 3 p.m. in Carver-Hawkeye Arena.

Before Iowa, Gustafson dominated in high school, setting the scoring record and a plethora of others, but her most impressive skill there, and still to this day, is her ability to stay modest.

Her basketball talent certainly helps keep Port Wing’s population of around 160 glued to the television on game days, but Gustafson’s endearing nature compelled a group of 40-plus Port Wingers to drive three hours to Minneapolis in order to see her on Jan. 14 in Iowa’s 81-63 victory over Minnesota.

“She’s always been looked upon as being very kind and considerate to others,” her father said. “She carried that kind of attitude all through high school.”

For Gustafson, “others” meant every single person. In her senior year of high school, Clendon Gustafson remembers the mother of a kindergartener talking to him about how Megan took the time to chat with the kindergartener.

“[The mother] thought that it was so amazing because most high-schoolers don’t give little kids the time of day,” Clendon Gustafson said. “I remember the mom saying, ‘They were just talking like they were good friends.’ ”

To this day, Megan Gustafson can be found signing autographs or posing for photos after every home game.

“I think that best exemplifies the way Megan is,” Clendon Gustafson said. “It doesn’t matter what level she achieves, she’s going to take time and make sure each person she talks to feels important.”

That unassuming personality, along with her exceptional basketball skills, accompanied her in the eight-hour drive from Port Wing to Iowa City.

What stayed in Port Wing, at least at the start of her Hawkeye career, was the exuberant part of her personality, the part that had earned her the nickname “smiley cakes” from her mother.

“Coming in as a freshman, I was kind of quiet,” Megan Gustafson said. “I’m kind of used to a small-town atmosphere. I was a deer in the headlights [in the beginning] for sure.”

It wasn’t until then Hawkeye Chase Coley started pulling Megan Gustafson out of her comfort zone that she began to open up.

However, even an “opened up” Gustafson has been a quiet one. That is before this season, in which she has become more vocal in helping lead the team to its current 22-6 record.

“She never really has used her voice a lot until this year,” Iowa head coach Lisa Bluder said. “This year, she’s made the most impact with her words.”

While her “smiley cakes” nickname might not always have suited her at Iowa, her best high-school post move, the drop step, certainly has.

She has various other post moves to go along with it, but her drop step is the biggest reason she is a National Player of the Year candidate this season, and it’s why she has averaged 20.2 points per game during her career.

A perfectly performed drop step is typically a tough move to stop, but there’s something about Gustafson’s that makes it more unstoppable than others.

Her move begins before she even has the ball in her hand, and it happens so fast it appears as if she catches, turns, and shoots the ball in one motion. A poorly timed glance down at a phone would cause someone to miss it.

Clendon Gustafson, a former post player, gets the credit for helping teach her the drop step, which she has turned into arguably the best offensive move in college basketball.

“My dad loves that drop step,” Megan Gustafson said. “He told me, ‘That’s pretty much one of the only moves you’ll ever need.’ The drop step has been my No. 1 move since Day 1.”

During the course of her four years at Iowa, it would be tough to find any press conference Gustafson has had in which she hasn’t thanked her teammates and coaches without taking any glory for herself.

“I appreciate the way she is humble and acknowledges the contributions of others,” Clendon Gustafson said. “She says that every time she gets interviewed, and it’s not just lip service. It’s genuine — she truly is thankful for all the contributions of her teammates and coaches.”

Megan Gustafson says she was raised to be humble and amiable, but even her father is left marveling at how she has shed the “selfish millennial” trope.

“I honestly don’t know,” Clendon Gustafson said when asked how he thought Megan Gustafson was able to stay so grounded.

Her mother thinks raising her to be strong in her faith has been the biggest reason for her unparalleled modesty.

“She was raised in a church,” Eva Gustafson said. “I would say her faith is the biggest reason she has been able to stay grounded. She does everything for something greater than herself.”

“Megan is amazing to me,” Bluder said. “When you have a player who’s getting these kind of accolades who still wants to get better, I think they’ve got a pretty level head on. She’s an All-American with no ego, and that’s hard to find.”

Describing her as having “no ego” may be an understatement. Time and again, Megan Gustafson has gone out of her way to be the mold of what a perfect teammate is.

“She’s very selfless,” Hawkeye Tania Davis said. “Like in the interview after the [Nebraska] game, she was more worried about the assist she missed at the end of the game for me. She never brags about any of her stats. Megan’s probably one of the best teammates I’ve ever had.”

She is the embodiment of Iowa Athletics Director Gary Barta’s “Win. Graduate. Do it right.” slogan, although, she might argue that she’s lacking in the “win” department.

Winning truly is of paramount importance to her — she said she hasn’t even thought about any of the several records she’s broken. What she focuses on is playing in a championship.

“She wants to win — everything else is a bonus,” Clendon Gustafson said. “Her greatest dream would be to be on an Iowa team that wins a championship, that’s what she’s in it for.”

In her four years at Iowa, she has only been to one NCAA Tournament, where she is 0-1 and has never won a Big Ten regular-season or tournament title.

That is something she hopes she can change this year. Iowa will be in the best position to succeed in both the Big Ten Tournament and NCAA Tournament than it has been in any of her previous three years.

Megan Gustafson moments over the years: 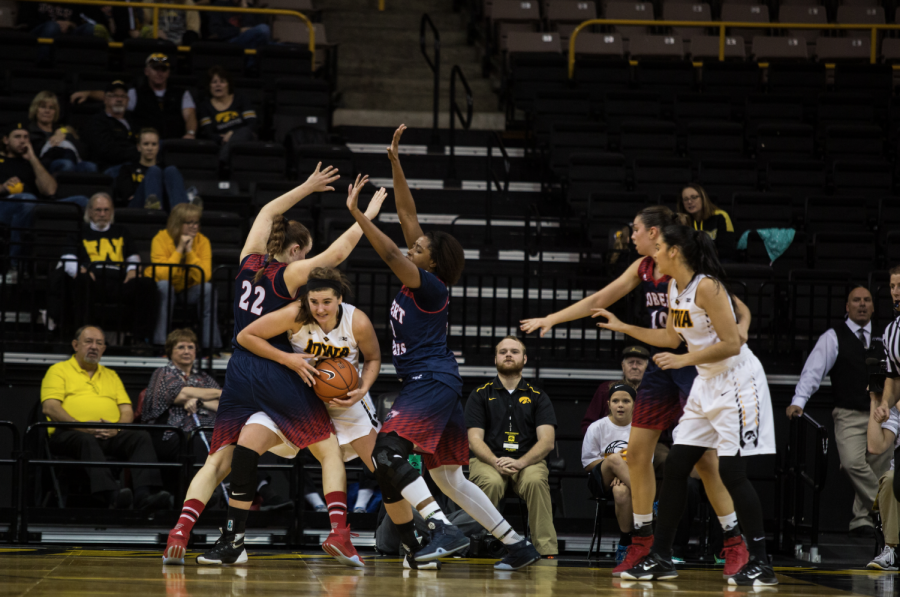 A goal of hers is to win at least one of those. Just ask Bluder — when Gustafson has a goal to reach, nothing gets in her way.

Her determination was on full display for Iowa’s coaching staff this summer when Bluder challenged everyone on the team to make 16,004 shots over 13 weeks.

Because Gustafson would be gone for almost two weeks in the summer, it was a goal that seemed unachievable.

Gustafson wants to be remembered for her passion and admiration for the game of basketball once she lays up her final basket.

“I look forward to practices, that’s the best part of my day,” she said. “Just to know I put my heart and soul into every single day.”

Her passion for the game was evident after the Hawkeyes 86-73 win over then-No. 7 Maryland, when she celebrated the victory by jumping up and down with more youth than any of the kids in the packed Carver-Hawkeye crowd that day.

“It was so amazing to see Megan at the end of the game jumping up and down,” Clendon Gustafson said. “She has so much passion for basketball.”

While her love of the game won’t soon be forgotten, Megan Gustafson’s legacy at Iowa will be remembered for much more than just the zeal with which she played.

So is Gustafson the greatest player in Hawkeye history?

That’s the question fans around the Iowa women’s basketball team ask. However, that debate hasn’t entered the Gustafson household.

She could conquer the world, I really believe that.”

Even mentioning that Bluder confirmed that Iowa will retire Gustafson’s No. 10 makes her mother squirm.

“It’s too early to talk about that,” Eva Gustafson stubbornly said. “It’s wonderful that it’s being talked about, but it’s not the time for that. There are still games left to be played.”

It would seem the basketball doesn’t fall too far from the rim.

Whether the Gustafson family likes it or not, Megan Gustafson has earned a right to be talked about as the greatest Hawkeye basketball player, and she absolutely has done enough to see her number lifted to the rafters of Carver-Hawkeye.

“What do I say about Megan anymore,” Bluder said. “She’s obviously a talented basketball player, one of the best in the United States, but it’s all the other stuff. We’ve had players who have been low-maintenance players. Megan has been no maintenance. She’s just an incredible human being; whatever you put in front of Megan, she will do it to the best of her ability, and it will be amazing. She could conquer the world, I really believe that.” 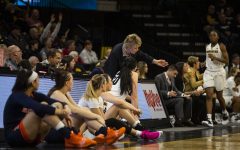 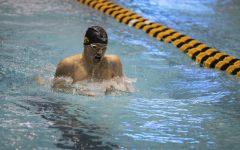 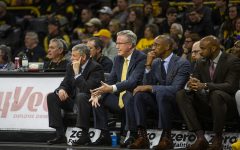 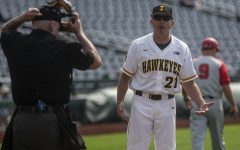