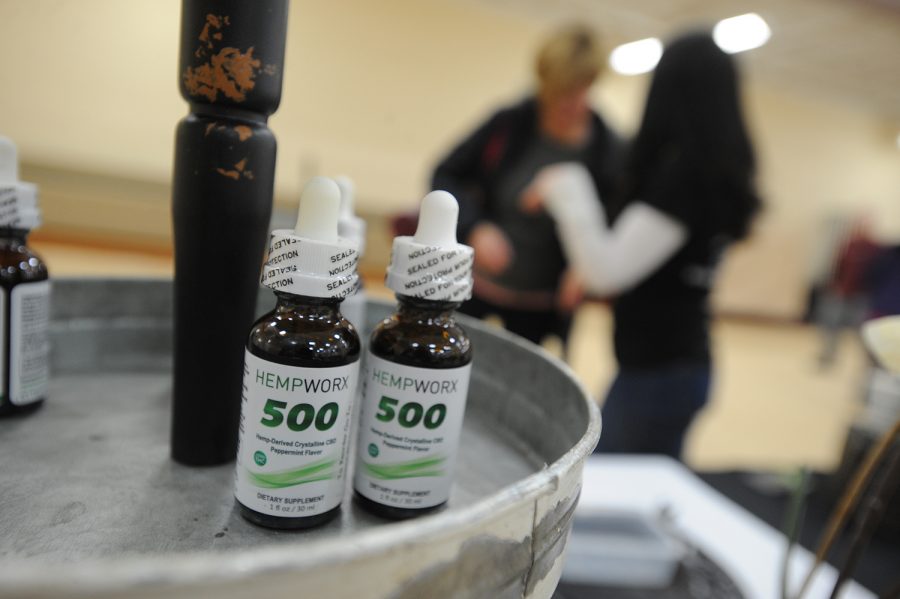 Teressa Sworsky talks with potential customers and explains the benefits of hemp oil and other CBD products at the Mokena Park District's January Flea Market on Jan. 13, 2019 in Mokena, Ill. (Warren Skalski/Chicago Tribune/TNS)

Iowa’s medical marijuana program has changed since its inception — the approval of a manufacturer, five dispensaries in the state, and an increase in the number of patients using the products. In this legislative session, lawmakers on both sides of the aisle seek to expand the program further.

“I’ve been encouraged to see that this may be an actual opportunity for bipartisan work to address a critical need in our state,” said Sen. Nate Boulton, D-Des Moines, the co-sponsor of a bill that would expand conditions under which patients could receive certification to be treated with CBD. “That is, getting people who need access to treatment, the access they deserve.”

One bill, SF 77, introduced by Boulton and Sen. Brad Zaun, R-Urbandale, would expand the list of medical conditions allowed to be treated with CBD. The bill would also raise a controversial cap on THC, the main ingredient in marijuana that gives users a “high,” from 3 percent to 13 percent. Boulton said the cap hurts manufacturers and limits one of two key ingredients in medical cannabidiol products. A proposed bill in the House would eliminate the THC cap altogether.

Boulton and Zaun’s bill passed a three-person subcommittee in the Iowa Senate Judiciary Committee on Jan. 31, and it awaits consideration and review by the whole committee. A similar proposal to add medical conditions to Iowa’s cannabis program that was introduced in the 2018 legislative session passed the Iowa Senate 45-5, but, but it was not taken up in the House.

Boulton said the 2019 bill came from discussions between him and Zaun. Zaun did not respond to The Daily Iowan’s request to comment.

As of Feb. 1, 1,361 Iowans have been issued medical cannabidiol registration cards, 52 percent of those use CBD products for “untreatable pain,” and 505 health-care practitioners have certified patients to participate in the program, according to data from the Iowa Department of Public Health. Monthly approved applications have increased by more than 10-fold. In February 2018, the department approved 22 applications, and in its peak month, December 2018, the department approved 383 applications, a 1,641 percent increase.

The debate surrounding CBD has been going on in the Legislature since before 2014, when then-Gov. Terry Branstad signed into law the Medical Cannabidiol Act. That legalized cannabidiol for medicinal purposes but drew fire from critics for requiring registrants in the program to obtain CBD out-of-state. Transporting CBD across state lines was a violation of federal law at the time.

An expanded Medical Cannabidiol Act was passed by lawmakers in 2017.

“One thing that has been apparent in our current medical-cannabis system is that very few people have actual access to treatment,” Boulton said.

Boulton and Zaun’s bill would also strike the “untreatable pain” qualification and amend the law to say “severe or chronic pain,” and it adds a new subsection to include “any other medical condition for which the patient’s health-care practitioner determines the use of medical cannabidiol could be medically beneficial.”

“We really want doctors to make those decisions based on the symptoms they are identifying, not any laundry list from the Legislature saying what’s ok and what’s not,” Boulton said. “We trust doctors to make the right decisions in a lot of different areas, including highly addictive narcotic pain medications.”

Sen. Joe Bolkcom, D-Iowa City, said he does not want doctors to be the ones to prescribe CBD and prefers the certification system in place in which doctors certify that the patient has a qualifying condition under the law. He said medical groups in Iowa have been against this type of legislation. One of those groups, the Iowa Medical Society, has lobbied against SF 77.

Representatives from the Iowa Medical Society did not return the DI’s request to comment by phone, but in an opinion piece published in The Des Moines Register in December, Iowa Medical Society President Michael Romano wrote that he believes there is an inadequate amount of scientific research to prove medical cannabidiol products are helpful. 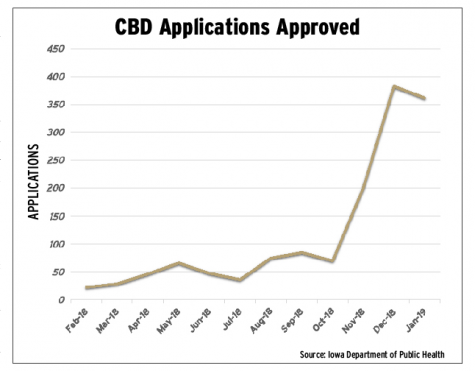 Co-Director of the Center for Medicinal Cannabis Research at the University of California-San Diego J.H. Atkinson said there is little evidence to support therapeutic effects of CBD but noted that existing research has shown that CBD may help people with a phobia of public speaking, rare childhood seizure disorders, and schizophrenia.

Epilepsy Foundation Iowa, on the other hand, supports the bill. A statement from the foundation emailed to the DI by Executive Director Roxanne Cogil detailed reasons the foundation supports measures to expand the current program.

“While not everyone with epilepsy should or would consider medical cannabis or CBD as a treatment option, some people living with uncontrolled seizures have reported beneficial effects and reduced seizure activity when using medical cannabis, especially strains rich in CBD,” Epilepsy Foundation Iowa said in an email to the DI.

THC and CBD, components of medical cannabidiol products, are each part of cannabis plant. Early research has shown that these two molecules bind to receptors in the body.

“Neither of these molecules will heal anything,” Director of MedPharm Iowa Lucas Nelson said. “What they’re both really effective at doing is treating the symptoms that those conditions bring on.”

MedPharm Iowa is the only manufacturer of CBD products in the state. It received a manufacturing license in November 2017.

Nelson said he is in favor of removing the THC cap completely and replacing it with a purchase cap, limiting the number of products purchased by an individual in a certain period of time rather than limiting the amount of the molecule present in the formula. He added that removing the THC cap would allow for different products to become available and lower prices, as products would be able to be more concentrated.

The company makes four different formulas under the label Aliviar with different ratios of CBD to THC. Depending on the formula, patients can purchase creams, tinctures, or capsules in varying levels of strength.

These products can only be purchased from one of five dispensaries in the state. MedPharm Iowa operates two of them and the other three are owned and operated by separate companies.

Bolkcom, a proponent of medical marijuana and legalizing recreational marijuana, said adding more dispensaries is an important step to improving the current medical cannabidiol program. Other steps he noted in an interview with the DI were raising the THC cap and adding more qualifying conditions.

“There is no reason for people to needlessly suffer in Iowa because they can’t get access to safe legal cannabis,” Bolkcom said. “There’s just no reason for it, and I hope that we can make a breakthrough this year to fix some of these problems in our current program.” 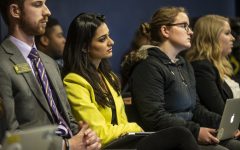 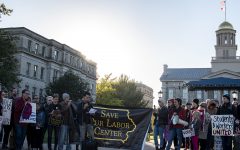 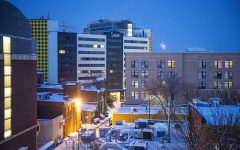