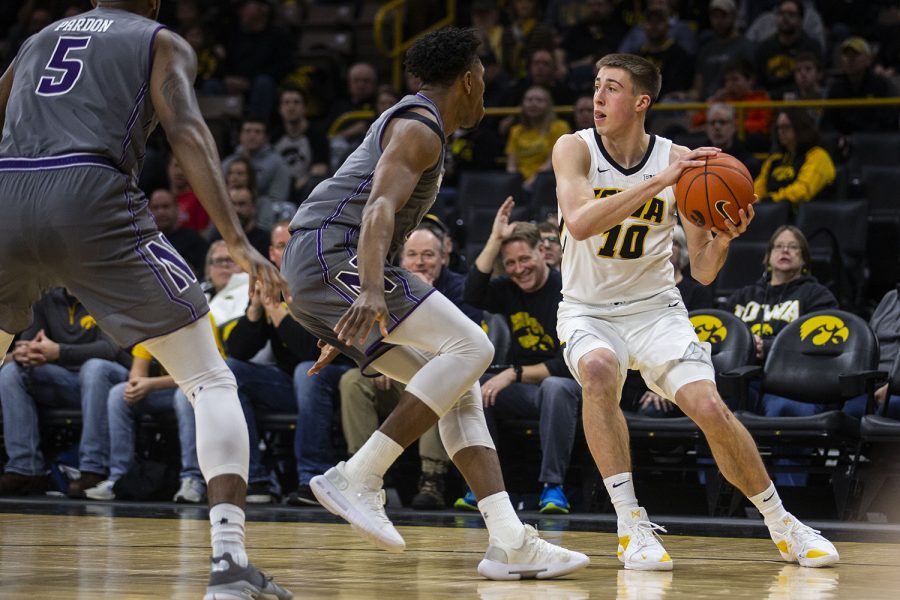 Iowa guard Joe Wieskamp looks to pass the ball during the Iowa/Northwestern men's basketball game at Carver-Hawkeye Arena on Sunday, February 10, 2019. The Hawkeyes defeated the Wildcats, 80-79.

Point/counterpoint: Who is Iowa’s best scorer?

Multiple players have carried the load for Iowa this season. Two DI staffers debate who the Hawkeyes’ best pure scorer is.

While only a freshman, Joe Wieskamp has become one of the deadliest sharpshooters in the Big Ten.

Wieskamp, the state of Iowa’s all-time leading high-school scorer, averages 11.9 points per game. That mark ranks third on the team, but he has achieved it while taking fewer shots per game than teammates Tyler Cook and Luka Garza, the two in front of him.

Veteran Big Ten coaches such as John Beilein and Tom Izzo have been quick to commend the Iowa freshman, saying his game goes beyond what you see from a player of his age. That respect translates to the court, where Wieskamp is face-guarded off the ball and often faces the opposing team’s best wing defender.

Despite being such a focal point of the defense’s game plan, Wieskamp still produced. He is shooting 51.6 percent from the field and a team-leading 45.3 percent from beyond the arc.

With his ability to drain any shot after crossing half court with his veteran moves driving to the hoop, that creates an offensive weapon of the likes of which head coach Fran McCaffery may not have seen before.

Weiskamp’s standout game of the season thus far is his Jan. 20 shooting clinic against Illinois. On his way to a career-high 24 points, he had a perfect shooting performance, 8-for-8 from the field, including 6-for-6 from 3-point range. The game earned Wieskamp Big Ten Freshman of the Week honors and cemented his status as a scorer to be feared in the conference.

Wieskamp is the Hawkeyes’ best scorer, and the scary thing is (for the rest of the Big Ten) that he is only getting better.

If you look at the current stat sheet, it shows Tyler Cook and Luka Garza sitting on top as Iowa’s top scorers, but their efficiency can be questionable at times.

That brings me to the next two top scorers in the lineup. Most people would say that Joe Wieskamp or Jordan Bohannon is the top scorer at Iowa right now.

This is not the case. With the amount of time they spend on the court, they should have more points. They have been given the opportunity on numerous occasions and while they have certainly had successes, they seem to go on cold streaks quite often.

That is why the conclusion of who the best pure scorer for the Hawkeyes is Isaiah Moss. The way head coach Fran McCaffery plays Moss shows he is one of the few players McCaffery trusts to go in and score points when Iowa is in a pinch.

What also stands outs about him is his playmaking abilities and that he can knock down a shot from any part of the court. He moves around a lot more than the rest of the Hawkeyes to look for shots, and when the time comes, he makes them.

It is hard to pick when each of the five players mentioned have been decent all season.

After all, Iowa wouldn’t be where it is without Bohannon’s clutch gene, Wieskamp’s shooting, or Cook and Garza’s ability to battle in the paint.

But Moss has also found ways to carry the team in certain games. It seems like he started the year hot and has no intentions of slowing down.