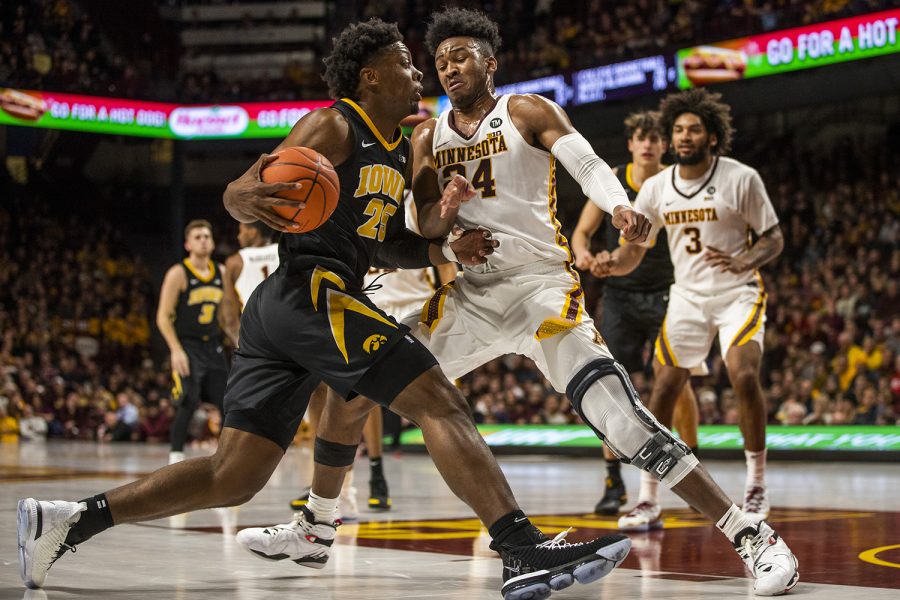 Point-Counterpoint: What will Iowa’s record be in Big Ten play?

As Iowa reaches the halfway point of the conference schedule, two DI staffers debate how Iowa will finish in the Big Ten.

Halfway through its Big Ten schedule, Iowa is at a bit of a crossroads. The Hawkeyes followed up a five-game winning streak by dropping two in a row.

In the two games, Iowa has stayed competitive for large stretches of the game, only to stumble into situations in which defensive liabilities and an inability to score forfeit the lead.

While Hawkeye fans may have a sour taste in their mouths at the moment, there are still plenty of chances to revive a promising season.

So many chances, in fact, that I predict Iowa to finish the season 11-9 in the Big Ten.

Tough matchups remain against the likes of Michigan and Maryland, and rematches against Ohio State and Wisconsin loom.

That being said, two games each against Indiana and Rutgers are on the docket, both of which are near the bottom of the Big Ten.

Throw in Northwestern at home, and Iowa has plenty of favorable matchups ahead to climb the totem pole in the Big Ten.

As all Hawkeye basketball enthusiasts will scream at the top of their lungs, the defense for the Hawkeyes must improve for a Big Ten record above .500 to become reality.

Such shooters as Jordan Bohannon and Joe Wieskamp also have to be involved in the offense, unlike in the loss to Minnesota, in which the two were held scoreless for most of the game.

Iowa has a good core of talent and has proved that it is capable of coming back from a losing skid.

If head coach Fran McCaffery can make the necessary adjustments, the Hawkeyes should have themselves positioned well when the Big Ten Tournament approaches.

Iowa basketball showed a promising start to the season when it went undefeated against nonconference teams. It seems as if Iowa’s kryptonite is playing against Big Ten opponents, especially on the road.

Like many, I figured Iowa’s losses would be against high-profile teams such as Wisconsin and Michigan State. Then the trend continued when the Hawkeyes lost two games on the road against unranked opponents in Minnesota and Purdue.

This made me scratch my head and start to ponder what the Hawkeyes’ problem is. I believe it’s a mix of their starters who are cold on offense and an inconsistent defense.

When you have three of your top shooters (Moss, Wieskamp, and Bohannon) only combine to score 10 points against a top team such as Michigan State, there is no way you can win against a high-scoring offense.

As for the defense, it has been up and down all season long. Iowa has shown amazing defensive skills at points in the season, but it has not shown that in the past few games. If the Hawkeyes had a better defensive scheme against Minnesota, that game would’ve been a “W” for Iowa.

If Iowa continues the trend it’s on, I think it will only break even in conference play and end with a conference record of 10-10.

The Hawkeyes have 10 more games, and they are split evenly between home and road games. Iowa has some ranked opponents coming into Carver, including Michigan and Maryland. Wins against these teams would help prove its worth and show that it’s back on track, playing solid basketball.

But Iowa also goes on the road, which has proven to be tough for it. It will face such teams as Ohio State, Nebraska, and Wisconsin, which were all close games at Carver-Hawkeye. Not having the home-court advantage might lead to more losses in those contests.