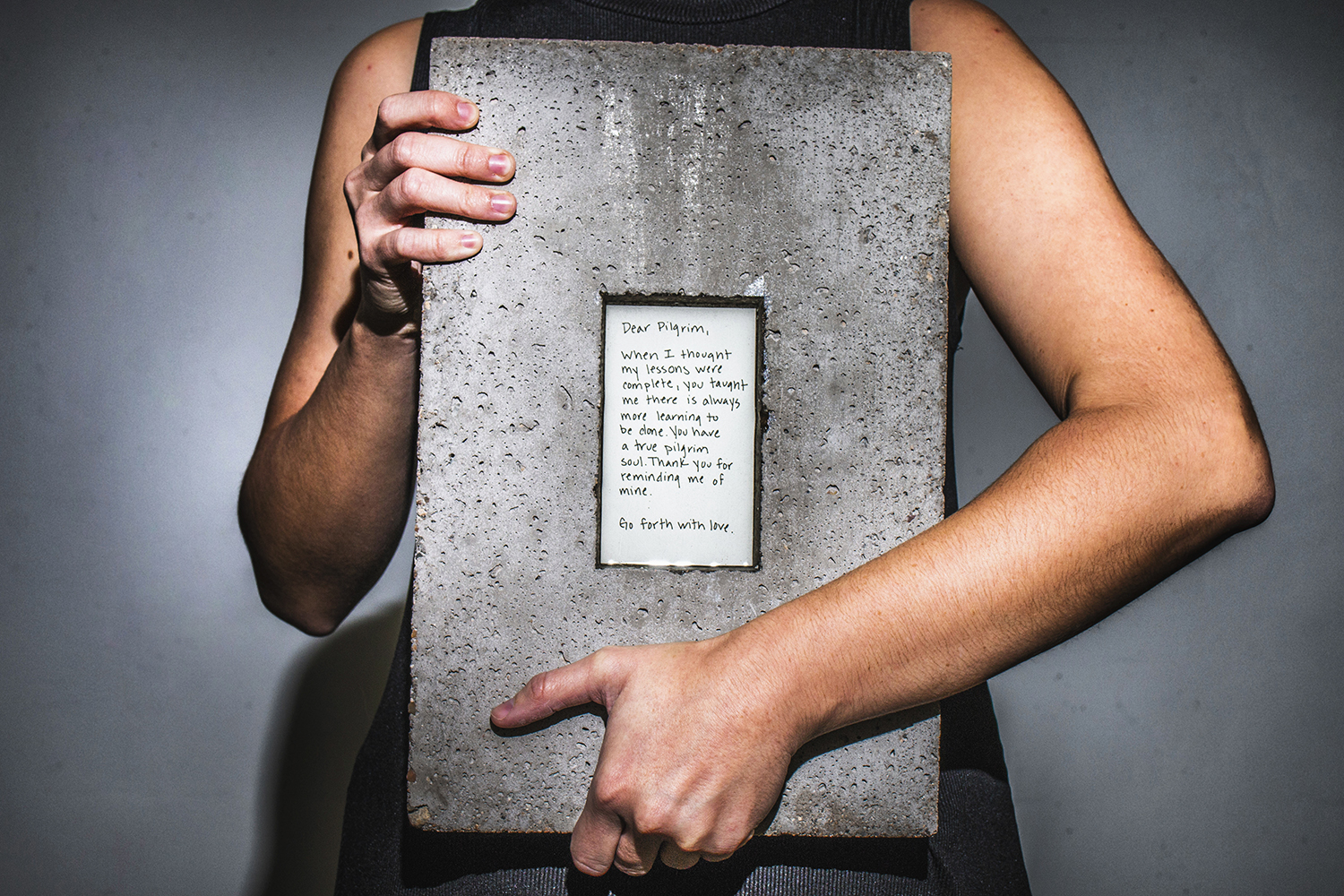 UI intermedia graduate student, Melissa Airy, holds a stone part of her series, “Dear Pilgrim, Thank You,” in the Visual Arts Building on Friday, November 16, 2018. Airy dedicates her artwork to show how the Camino de Santiago, a 500-mile pilgrimage across Spain, impacted her life personally and as an artist. (Katina Zentz)

UI intermedia graduate student, Melissa Airy, holds a stone part of her series, “Dear Pilgrim, Thank You,” in the Visual Arts Building on Friday, November 16, 2018. Airy dedicates her artwork to show how the Camino de Santiago, a 500-mile pilgrimage across Spain, impacted her life personally and as an artist.

UI intermedia graduate student Melissa Airy creates artwork to show the impact of her experiences on the Camino de Santiago, a 500-mile pilgrimage across Spain.

She trudges up the mountain side, wind whipping her face, and grips her backpack tighter than before. Thousands of pilgrims march across the rocky terrain. Blisters line their feet; their bodies ache from miles upon miles of walking. One dreams of finishing a religious journey; another wishes to start a new life.

Finally, she sees the destination in the distance. The Spanish cathedral stands high, almost pointing to the heavens. Feelings of enlightenment emanate from her body. She sets down her weathered bag, glances toward the ceiling, and thinks to herself, “We’ve made it.”

With nothing but a backpack, a change of clothes, and a pair of shoes, intermedia graduate student Melissa Airy, 26, embarked on the Camino de Santiago. The expedition, also known as The Way of St. James, is a 500-mile pilgrimage that stretches back and forth across Spain. After a transformative pilgrimage, she decided to do it again. Airy dedicates her graduate-student career to producing art exhibiting life-changing experiences from each of the journeys. She creates live performance pieces to display the physical and emotional effect the Camino had on her life.

Natural light fills her studio in the Visual Arts Building as Airy finishes sanding a piece of her artwork. She glances up.

“There’s kind of two aspects,” she said. “It affected me personally but also as an artist. Those two identities and where they mix is something I’m fascinated with and is the foundation of my research.”

One of her signature pieces, Dear Pilgrim, Thank You, expresses her gratitude to each pilgrim she met along the way.

In this series, Airy creates 30-pound blocks of concrete that are 3-x-9-x-14 inches. Located in the center of the artwork is a note, covered with resin on top, thanking each pilgrim.

The material for each block is hand-mixed concrete and includes a wooden mold to hold the shape. Each block takes around two days to dry. The strenuous process symbolizes the meaningfulness of the connection with each pilgrim.

Airy holds the blocks in her performances for about an hour. Every few minutes, Airy switches the stone she holds.

“People see a stone, and they just see a stone,” Airy said. “But if people see me struggling to hold these stones, it shows the physicality of their impact on me.”

The artist first embarked on the pilgrimage in the summer of 2016. However, the Camino meant something more to Airy than a simple trip across Europe. The faith ingrained in the path of the pilgrimage connected with Airy’s religious roots.

Airy’s family raised her in a Catholic household and taught her to appreciate rituals. The Camino allowed Airy to dig deeper into the practices of her faith and bring out those concepts of ritualistic practice in her artwork.

In order to prepare for the religious trek, Airy wanted to be as mentally and physically prepared as possible.

After work, Airy, a Cedar Rapids native, regularly took her backpack and practiced walking. She hiked anywhere from 5 to 15 miles a day, depending on her schedule, Airy said.

“I just wanted to make sure my body could physically do it,” Airy said. “Yet no matter how much I trained, I was not ready for Day 1 because you were walking through mountains, and we don’t have mountains in Iowa, right?”

On each of the pilgrimages, Airy walked for around six weeks, except for two rest days in bigger cities such as Burgos and León. Along the way, she stayed in hostels and only brought necessities such as clothes and shoes.

When traveling on these expeditions, pilgrims not only leave their belongings behind but their loved ones as well. The simplicity of walking, something often taken for granted, binds each pilgrim together.

“We just walked, and it turned into the best experience of our lives,” Airy said.

The history of the Camino dates back to when pilgrims discovered the body of St. James, more than 1,000 years ago. Being a great evangelist of Spain and a leader of traditions, the Spaniards decided to build a cathedral by the saint’s tomb in Santiago. Starting in the 10th century, pilgrims began traveling on the Camino de Santiago to visit St. James’ tomb.

According to the official website of the Pilgrim’s Reception Office in Santiago de Compostela and the Confraternity of St. James, the number of pilgrims receiving the Compostela certificate, (a document indicating the completion of the Camino) is increasing every year. In 2017, slightly more than 300,000 travelers received this certificate.

Despite the enlightening experience of visiting the cathedral and receiving the Compostela, pilgrims endure many struggles along the way. Some travelers do not finish the pilgrimage, because of injuries, heat exhaustion, weather, or simply the concept of walking in a foreign country.

“It was hard, seeing people mentally wanting to do the pilgrimage but not be able to,” Airy said.

Though, through bedbugs, crowded hostel rooms of 100 or more people, and climbing mountains, Airy focused on the simplicity of a pilgrim’s life as a blessing. The minimalism helped her limit distractions when experiencing the presence of God.

Throughout her faithful journey, Airy participated in customs that allow pilgrims to release their burdens and dedicate their quintessence to the Way of St. James.

The Cruz de Ferro, an iron cross reaching high to the skies with a 1,000-rock pile at the foot of the monument, is located three-quarters of the way down the Camino. Pilgrims traditionally carry a rock in their backpack, and once they reach the Cruz de Ferro, they set the rock at the base of the cross.

What seems as a simple action is actually one of the most important aspects of the journey.

The Cruz de Ferro symbolizes the action of pilgrims releasing the weight of a burden, signified in the weight of the stone. The act of moving the unwanted energy of this burden to a simple stone and leaving it at the cross fascinated Airy and contributed to her artwork created in grad school.

To correctly show the weight of the effect of this experience, Airy conducted a live performance called It’s Time We Talk at Public Space One, where she carried a backpack and set a pile of stones next to her. Throughout the performance, attendees dropped the stones in her bag, making it heavier throughout the night.

At the end, Airy chose a single stone and used that as her rock on her second pilgrimage to set upon the base of the cross.

RELATED: Around the World in 80 Bites: Take a look inside Iowa City’s ethnic cuisine

“I didn’t know whose stone it was; I don’t know what they were going through,” Airy said. “Essentially, I was letting go of someone’s burden for them the second time around.”

Continuing on her journey, Airy reached the town of Santiago. However, when she arrived, she realized it was not what she expected it to be.

She came early in the morning. No locals were around to congratulate her on her journey. The town was silent.

To Airy’s surprise, she appreciated the quiet, early morning nature of the town. The silence allowed her to truly take in her accomplishments.

Upon reaching the Holy City, Airy wrote about the experience in her journal.

“I could just barely see the spires of the cathedral rising up from the city. That view was exactly how I needed to be invited into Santiago after 500 miles of walking. It felt like at last we had made it, at last I was home.”

This feeling filled her most in the pilgrim’s Mass, held in the cathedral. Around 20 priests greet and bless the pilgrims. The priests release the Botafumeiro in the Santiago de Compostela Cathedral. This object swings across the cathedral, releasing heavenly smells as music fills the air.

“It was at that moment that it hit me that, I did this,” Airy said.

Along with Dear Pilgrim, Thank You, Airy creates and acts in other live performances to display different scenes of the pilgrimage.

In Sacra Mundanam, performers rotate between movements of hand-washing clothes, hanging cloth to dry, and serving soup. The other segment of the piece signifies the holiness of the Santiago de Compostela Cathedral.

Airy created the piece in order to explain to audiences that regular actions hold a certain sacredness on this journey. Whether the materials include a simple clothespin on a clothesline or vegetables in stew, all of the elements contributed to the minimalist aspects of the pilgrimage.

This coming summer, Airy plans to embark on the Via Francigena, a three-month pilgrimage stretching from Canterbury, England, to Rome. She hopes the pilgrimage will contribute to her faith as the Camino did.

“All in all, my artwork reflects the lessons I’ve learned on pilgrimage,” Airy said. “All of my work shows my true identity and has allowed me to gain a new outlook on the world.” 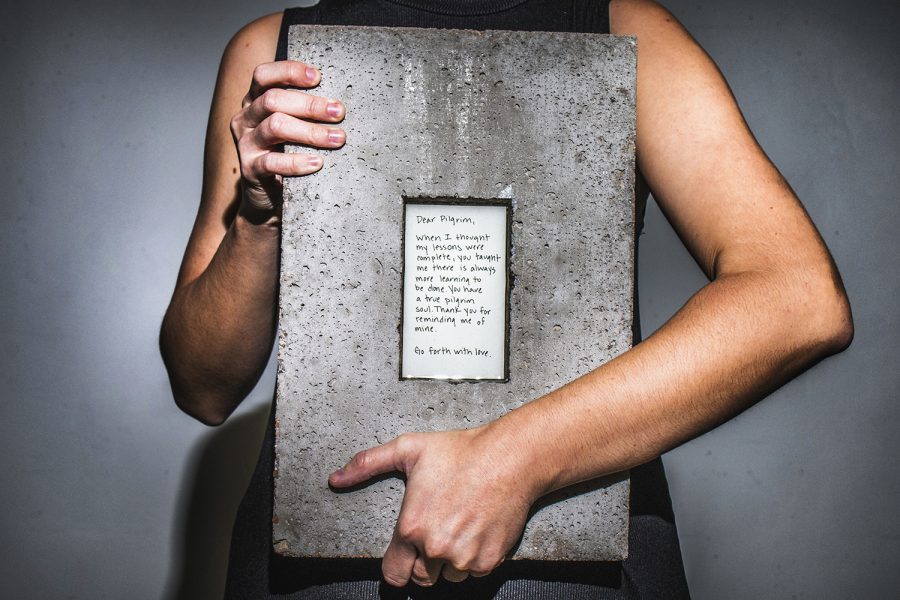 Gallery|13 Photos
Katina Zentz
UI intermedia graduate student, Melissa Airy, holds a stone part of her series, "Dear Pilgrim, Thank You," in the Visual Arts Building on Friday, November 16, 2018. Airy dedicates her artwork to show how the Camino de Santiago, a 500-mile pilgrimage across Spain, impacted her life personally and as an artist.
Facebook Comments