The president of the board governing Iowa’s public universities contributed to recently elected Iowa Gov. Kim Reynolds and other Republicans this election cycle, continuing a trend of appointed board leaders being prominent political players.

Leaders of the state Board of Regents in recent years have been labeled Iowa “kingmakers” — influencers in Iowa politics given their financial backing and close ties to GOP candidates. Current Regent President Mike Richards appears to continue the trend with his campaign committee contributions this past election cycle.

Richards, a major Republican donor, has in the last two years contributed financially to a number of state and federal races. Among them are the political committees of Iowa Gov. Kim Reynolds, Sen. Joni Ernst, R-Iowa, Rep. Steve King, R-Iowa (4th District), and Matthew Whitaker — who campaigned for the open Senate seat, lost to Ernst in the 2014 Republican primary, then was appointed by President Trump on Nov. 7 to be acting U.S. attorney general following Jeff Sessions’ resignation.

In the 2017-18 election cycle, Richards, who was elected to the regents’ top position in May 2017, contributed $62,800 to candidates’ political committees in his own name and through a revocable trust in his name.

The regents serve six-year terms on the nine-member board responsible for overseeing Iowa’s special schools and three public universities and are responsible for hiring and evaluating the performance of university presidents, voting on tuition increases, and approving other major university decisions.

Regents, unpaid volunteer positions, are appointed by the governor and confirmed by two-thirds of the state Senate.

Iowa Code requires the state’s governing boards and commissions be politically balanced with one party having a majority of no more than one. The  current board comprises five registered Republicans, three independents, and one Democrat.

Megan Tooker, the executive director of the Iowa Ethics and Campaign Disclosure Board, said only certain executive-branch positions are explicitly prohibited from engaging in political activity. She said the regents were not included in those positions and may contribute to campaigns.

Some of the positions from 18 agencies banned from engaging in political activity include the executive director of the Iowa Finance Authority, members of the Iowa Public Employment Relations Board, and employees of the Legislative Services Agency.

University of Northern Iowa political-science Professor Donna Hoffman said it makes sense that before people such as the regents become political appointees, they were active in the political sphere.

Reynolds’ predecessor as governor, Terry Branstad, who stepped down to serve as the U.S. ambassador to China in spring of 2017, appointed eight of the nine current regents, including Richards in 2016. Richards has contributed $40,950 to Branstad’s committee since 2009.

“It’s not particularly surprising that people who were active in politics … then continue to be political,” Hoffman said.

The courts have upheld campaign financing as a form of speech — in this case, campaign contributions are an expression of political speech. While recognizing the potential for money to corrupt, Hoffman said, disclosure reports are the safeguard that keeps corruption at bay.

“The notion here is that disclosure is something the public can use or senators can use if they feel that that is unsavory,” she said.

Regents’ contributions to the gubernatorial candidates’ campaign committees have, over time, been among the most publicly scrutinized, raising suspicions that top campaign contributors are awarded with an appointment to the governing board of Iowa’s public universities.

Legislators have attempted to combat that perceived trend in the past. In 2015, Rep. Dave Jacoby, D-Coralville, filed legislation to require eight regents be elected by voters, with the ninth regent being a student appointed by the other regents, and would allow regents to receive campaign contributions. The legislation never made it out of committee.

I’m more worried actually about … whether, after the election, the successful candidate for governor is inclined to reward big-dollar donors with appointments to the Board of Regents.”

Sen. Herman Quirmbach, D-Ames, who represents the college town in which regent-governed Iowa State University is located, said the trend of regents contributing to a gubernatorial campaign and being awarded with an appointment to the governing board — whether or not that is the reason for the appointment — is not unique to Republicans. It occurred under Democratic Govs. Tom Vilsack and Chet Culver, with former regents such as Ruth Harkin, Jack Evans, and Teresa Wahlert.

However, he said, he finds the pattern of contributing to a gubernatorial campaign and landing in a position on the regents troubling.

“The people who are donating, are they influencing the governor or gubernatorial candidate? I don’t know, maybe,” he said. “I’m more worried actually about the other way around — whether, after the election, the successful candidate for governor is inclined to reward big-dollar donors with appointments to the Board of Regents.”

Iowa Senate President Jack Whitver, R-Ankeny, said he does not envision any changes to the current process of appointing regents or members of other boards.

“I think the regents who have been appointed in the last few years are very qualified,” he said. “They have to go through a rigorous confirmation in the Iowa Senate, so I am happy with that process.”

Richards is not alone among the regents in contributing to political campaign committees.

In the governor’s race alone, of the 12 people to serve as regents during the 2017-18 campaign cycle, six regents — three current regents and three who previously served — had doled out $142,723.98 to Reynolds’ campaign committee since 2015.

Included in that total is former Regent President Bruce Rastetter, who has remained active in Iowa’s GOP circle, contributing $95,173.98 to Reynolds and contributing to other Republican candidates. Rastetter, appointed by Branstad in 2011, had contributed $239,188.91 to Branstad’s political committee in both contributions and in-kind contributions since 2009.

None of the 12 current and former regents whose campaign-finance records were examined by The Daily Iowan had contributed money to the committee for Reynolds’ Democratic opponent, Des Moines businessman Fred Hubbell, who largely self-funded his unsuccessful campaign and was his own top contributor. Even former Regent President Pro Tem Katie Mulholland, a registered Democrat, contributed $300 to Reynolds’ committee.

Now that Reynolds has secured her spot in the Governor’s Office, she will have the opportunity during her four-year term to appoint at least six regents. She has already appointed one, Jim Lindenmayer, a registered independent, to the board to fill the unexpired term of Subhash Sahai — one of Reynolds’ campaign committee contributors — after he resigned in June.

Sen. Joe Bolkcom, D-Iowa City, said the matter of regents contributing to gubernatorial campaigns “was a pretty prominent issue with Rastetter. It was an enormous amount of money that people can’t relate to in any way, shape, or form.”

However, he said, everybody has the right to free speech, which people are allowed to lawfully express through campaign contributions.

“My hope is that members of the Board of Regents actually do a better job of advocating for the public universities. We’re not doing very well right now,” Bolkcom said, referring to the pattern of budget cuts the universities have endured. In the last two fiscal years, the regent universities have seen their budgets trimmed by more than $35 million.

“The governor appoints all these people, and then the governor defunds the universities,” Bolkcom said. “It’s not very helpful.”

But, he said, higher education is not the sole interest on regents’ minds.

“They support the governor for a whole host of reasons,” he said about the regents who have contributed to Reynolds’ political committee. “They’re Republicans. Higher education is an issue, but they have lots of interests … that Kim Reynolds supports.”

Quirmbach said he hopes the governor chooses to appoint people who support academic freedom and diversity, who will promote access to the universities, and who have the time to commit to improving the quality of Iowa’s public universities.

And he questions making political appointments based on their financial generosity: “I don’t know that making large donations to political campaigns necessarily correlates with any of those things.”

The acting attorney general faces scrutiny after the revelation that four individuals — Richards among them — contributed this year to the committee for Whitaker’s campaign that ended in 2014. The discovery calls into question why there would be contributions to an inactive campaign and raises concerns that Whitaker may have violated a federal law prohibiting some forms of political activity among certain executive-branch officials.

Earlier this year, Whitaker’s campaign committee received contributions amounting to $8,800 in a period of four days from four people all residing in Iowa — the first contributions to come after two years without receiving any, records show.

The New York Times wrote Nov. 20 about Whitaker’s financial-disclosure forms, touching on the contributions to his campaign committee, and reported that Whitaker’s former law partner William Gustoff said, “The donations were not solicited by me or by Matt.” The Times reported Gustoff could not explain why the contributions came long after the campaign had ended.

“The checks came in. I, as the treasurer, deposited the checks, and I retired the debt that I knew I could without talking to Matt,” he told the Times. “I don’t talk to Matt about the campaign.”

Records show both Whitaker and Richards had ties beyond being University of Iowa graduates. Whitaker was registered as a lobbyist in Iowa between January 2011 and 2014. From 2012 to 2014, he listed Wild Rose Entertainment LLC. and Kirke Financial Services Inc. — both companies Kirke, Richards’ longtime business partner and also a major Republican donor, founded — as his clients.

Richards is a cofounder, board member, and owner of Wild Rose Entertainment, according to regents’ conflict of interest disclosure reports dated May 1. He has served as a consultant for Kirke Financial Services and listed it as his employer in campaign-finance forms as recently as March.

It’s not clear why Richards contributed to Whitaker’s campaign committee, but the Times noted any coordination of the contributions on Whitaker’s end would be a potential violation of the Hatch Act, a federal law barring certain executive-branch officials from some forms of political activity. 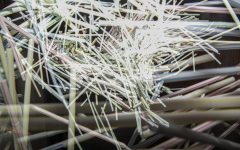 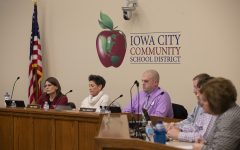 Iowa City school board redraws boundaries for next fall 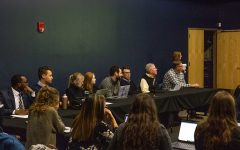