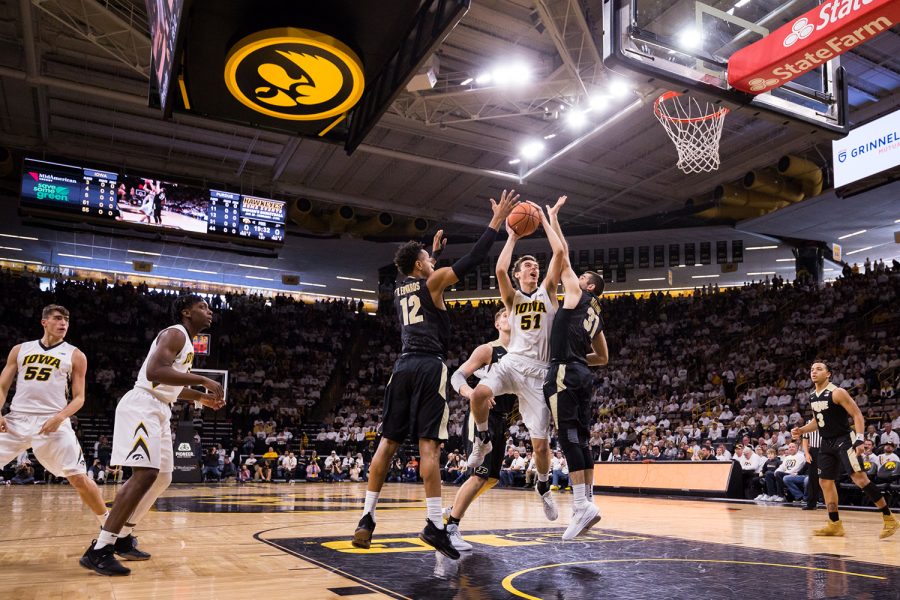 Iowa Forward Nicholas Baer attempts a jump shot during a game against Purdue University on Saturday, Jan. 20, 2018. The Boilermakers defeated the Hawkeyes 87-64.

Point-counterpoint: Who is the best player off Iowa basketball’s bench?

Iowa basketball is in the top 15 with the starters and bench fueling its run.

After redshirting his freshman season because of injury, Connor McCaffery is taking Iowa basketball by the reins and has helped make the team a threatening force.

Somehow, he has been able to do this not as a starter but through his role coming off the bench.

McCaffery was dynamic when he subbed into his team’s matchup against Connecticut. What better place for a coming-out party than Madison Square Garden, the epicenter of American hoops?

He played 29 minutes in the victory over the Huskies and only committed 1 turnover while putting up 5 assists for the Hawkeyes and posting a career-high 19 points.

His ball handling is certainly what will make a huge difference for Iowa in the coming weeks. In the team’s most recent contest against Alabama State, McCaffery dished out 7 assists in his 22 minutes of time.

If McCaffery can keep up his solid track record, it could make a good team into a lethal one.

Watching him as a floor general will be fun this season. He shows great composure at the top of the key, and the team’s vets have been pleased with his decision-making — the chemistry overall has been great with him on the floor.

Most importantly, McCaffery brings the Hawkeyes some much-needed depth. With almost all of last year’s squad returning this season, he will be able to cause some damage when starting guard Jordan Bohannon is in foul trouble or is cold.

Having McCaffery off the bench will prove to be a big asset as the season progresses, and his presence will make Iowa a better basketball team.

For the past two years, Nicholas Baer has been known as Iowa’s sixth man, a weapon off the bench.

Let’s start out with this: He walked on, and while his career is coming to an end with his name not in the starting lineup, he knows what his role is, and that’s arguably the best type of player.

In his senior year and only five games into the season, this hasn’t changed. So far, he has played in all five games for a total of 83 minutes and has 24 points, which sits behind six players on the team.

However, his role is to get on the court to make plays that give his teammates the ball, something that he’s done effectively in his entire career.

He has 27 rebounds and averages 5.4 per game. Look back up two paragraphs: He has played in fewer minutes than six players.

Without Baer, you don’t get those rebounds that put the ball in your playmakers’ hands. He’s a critical member of the Hawkeyes and the success that they’ve enjoyed.

He plays for the team, and he can contribute night in and night out. In any sport, that’s most important.