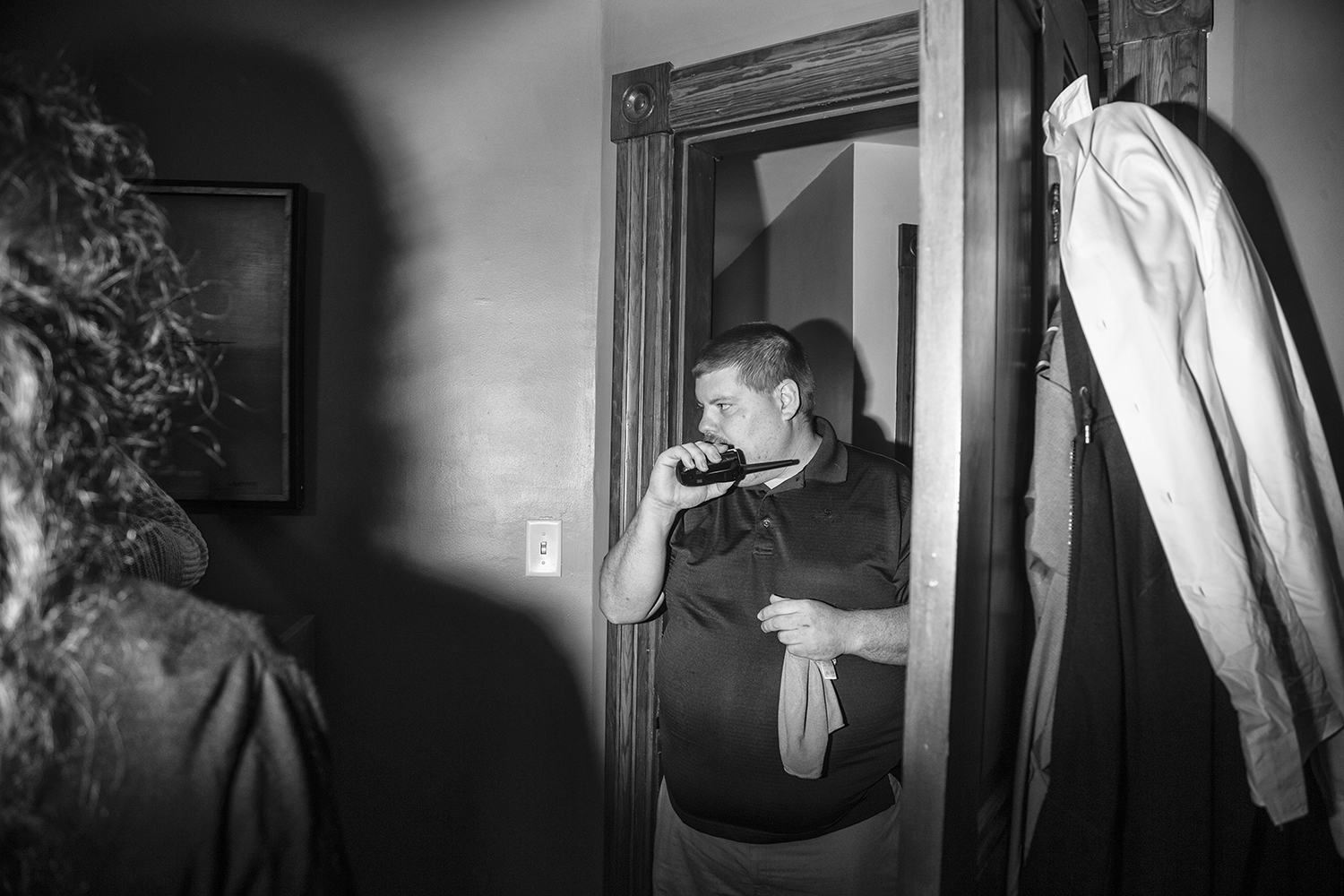 Matthew O’Brien, founder of the Iowa City Ghost Hunters, speaks on the walkie-talkie to his wife, Heather O’Brien, as she ran the base downstairs during an Iowa City Ghost Hunters paranormal investigation on Saturday, Oct. 20, 2018. The master bedroom was a point of heavy investigation because of the owner’s reports of feeling something touch his forehead while he sleeps.

Matthew O’Brien, founder of the Iowa City Ghost Hunters, speaks on the walkie-talkie to his wife, Heather O’Brien, as she ran the base downstairs during an Iowa City Ghost Hunters paranormal investigation on Saturday, Oct. 20, 2018. The master bedroom was a point of heavy investigation because of the owner’s reports of feeling something touch his forehead while he sleeps.

Are ghosts real? Behind the scenes of a paranormal investigation in a 125-year-old Iowa City home

A photojournalist joined a paranormal investigation with the Iowa City Ghost Hunters to try to answer a question: Are ghosts real?

I wasn’t quite sure what a haunted house would look like. A small living room and office space lay to the right of the stairs, and a hallway led back into the kitchen. Around the house were eclectic collections of religious icons, old books, World War II memorabilia, and an Iron Maiden poster hanging over the stairwell.

A heavy smell of food and wine hung in the air as several spectators and a three-person team of paranormal investigators finished up their meal, and cheerful laughter rebounded off the close space. The only sign of what was about to happen were several large black crates on the floor, each reading “Iowa City Ghost Hunters.”

I was heading into a paranormal investigation of a 125-year-old home in Iowa City. The owner, UI law Associate professor Mihailis Diamantis, had experienced increased paranormal activity in the three weeks leading up to the Oct. 20 investigation. He noticed sweet aromas in his living room, a door that opened and closed on its own, voices outside his house, footsteps in the house despite living alone, and felt a touch while in bed.

“I’m not sure I believe in ghosts,” Diamantis said. “But if they did exist, they would be in my house.”

Like Diamantis, I never put much stock in the idea of ghosts; however, over the past few years, I have grown increasingly interested in the paranormal. As a little kid, I was terrified of everything; for many years I had to sleep with my light on. And while I might have been scared of everything, nothing scared me more than ghosts. How could I defend myself from something that was invisible and already dead?

There were things that happened that night that felt like ghosts and that I couldn’t explain. ”

Finally, as a freshman in high school, I wanted to expose myself to the things that used to scare me — scary movies and paranormal TV shows. I found that as my enjoyment in the horror genre grew, so did my curiosity. What if ghosts were real? Is there any way to actually prove it beyond a shadow of a doubt?

Matthew and Heather O’Brien founded the Iowa City Ghost Hunters in 2012. Matthew was involved in paranormal investigation in the Chicago area for 15 years before moving to Iowa. Both he and Heather wanted to continue ghost hunting but found that many of the local teams didn’t meet their standards. Specifically, they wanted to form a practice that followed the HIPPA privacy rules followed by medical professions.

“That way, our clients know that if they don’t want their case made public, then it’s not going to be,” Matthew said.

He first got into paranormal investigation after a friend of his began experiencing paranormal activity. In his friend’s basement, he had his first experience with a demon.

“I got physically attacked by the demon,” Matthew said. “I had a 20-foot expandable ladder thrown across a basement, and the basement was more of a crawl-space.”

The Ghost Hunters members generally base their procedure of investigation upon the needs of the house; however, it was clear from the start that they take their hobby very seriously. Because this is not their full-time job, the hunters bought all the equipment — including an electromagnetic field meter, a Phasmabox, software used to communicate with ghosts, and video cameras — with their own money.

Another asset to their practice, both Heather and the newest team member, Patricia Hilliard, claim to have psychic abilities. Both were noticeably affected when they entered the house. At times, they breathed heavily, sought support from a wall, or had to momentarily leave the house.

Heather, when describing her feelings, said, “Choking is what I would equate it to.” Generally, choking can mean that someone has died in that place.

The Ghost Hunters first had the spectators help to set up cameras in all of the areas with heavy activity, which included the house’s main bedroom, guest room, attic, living room, basement, and another upstairs room.

Throughout the investigation, I was not sure what to think. There were certainly events that happened that I can’t explain. Before beginning the investigation, I photographed Matthew speaking with the eight others present who were curious about the process. My flash went off frequently, creating a strobe effect on the dying light of the living room.

As I adjusted and took another frame, weird circles appeared in the corner of the photograph, as though I had splashed water on the lens. But I had no water.

My frames taken both before and after that photograph did not have the same watery marks. I asked Matthew and Heather what they thought I might have captured, and they were excited, convinced that I had captured orbs, small balls of light that can indicate spirits trying to manifest themselves into an apparition.

Later, I climbed up into the possibly haunted, pitch-black attic with three others — the most terrifying thing I’ve ever done.

We stood clumped in the most open area. The floor and walls were made entirely of wood, and the only furniture was old, orange shelves. It was kind of chilly, and so we were quietly cracking jokes to keep our minds off the fact that we were in an attic with no lights on. We set the electromagnetic field meter on the shelves and left it there. It soon began to go off with a red light and beeps.

We called for Matthew over the walkie-talkies. He was interested to see what we could get with other methods of paranormal communication. He brought with him a Maglite flashlight and explained that by placing the switch close to off, it would be sensitive enough for ghosts to turn it on and off in response to our questions. For the four of us standing in the drafty attic with our phone flashlights facing the floor, it seemed impossible.

But the flashlight did turn on in response to Matthew’s questions around 15 times.

Now, I’m still not saying this method of communication is a definitive answer to the question, “Are ghosts real?” But the shock in the air was palpable among the students. Even I, ever trying to remain a straight-faced journalist, gasped the third time it happened.

Through the flashlight’s answers, we learned that there were two female spirits in the house, though there was also possibly a male and child spirit as well. They lived and died in the house and were related to one of the previous owners. When one of the students nervously asked the flashlight if the spirits sought to harm, the light quickly went out, meaning “no.”

I remain skeptical about the actual existence of ghosts. There were things that happened that night that felt like ghosts and that I couldn’t explain. It remains entirely possible that there was some way to influence both the electromagnetic field reader and flashlight remotely; neither Heather nor Patricia would go upstairs.

But there are still two details that don’t quite add up to entirely debunk the experience. First, the Iowa City Ghost Hunters is hobbyist, meaning that the members have no monetary stake in how haunted a house appears to be. So why influence the equipment? Second, I can’t explain the strange orbs that appeared on my camera. I shot continually through the sequence, yet they only appear in one frame.

I don’t know if I will ever find enough evidence to fully believe in ghosts, but this experience brought a more complete understanding of the paranormal. 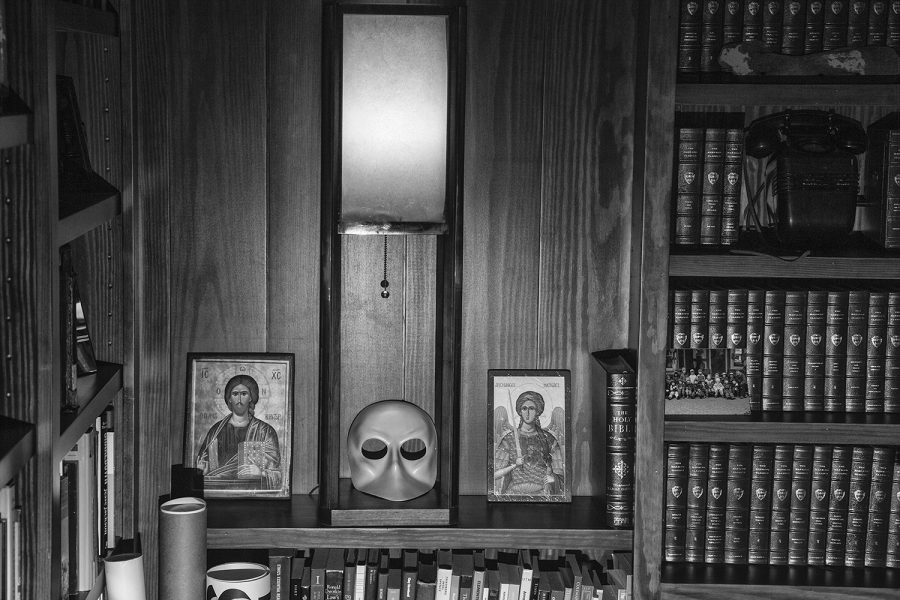 Gallery|15 Photos
Katie Goodale
Decor sits on a bookshelf in the living room during an Iowa City Ghost Hunters paranormal investigation on Saturday Oct. 20, 2018. The living room was an area that experienced heavy activity throughout most of the night. Many of the cameras picked up on strange balls of light that often were so heavy that it appeared to be snowing in the room.
Facebook Comments