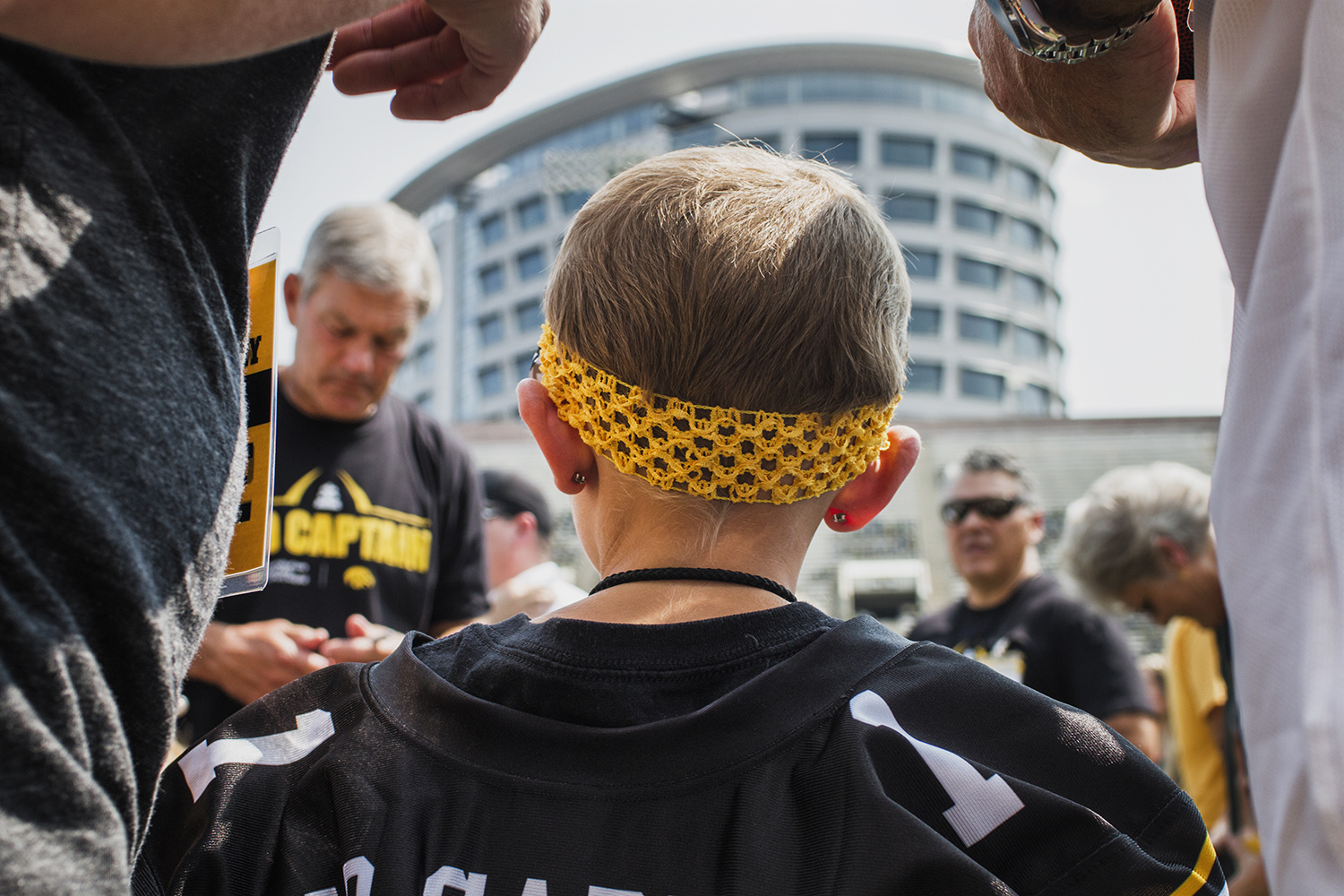 In 10 years, 134 kids with a vast range of medical challenges have inspired the Hawkeye community with their resilience, optimism, and strength through the Kid Captain program.

The Smith family pulled into a parking spot reserved for the Kid Captain before the Iowa/Illinois game on Oct. 7, 2017. Parked next to them was former Hawkeye and New England Patriot defensive end Adrian Clayborn, the honorary captain for the game.

Ten-year-old Maddox Smith and his friends challenged the 6-3, 280-pound Clayborn and his friends to a football game in the parking lot outside of Kinnick Stadium. After that, the Kid Captain and the NFL player walked out on the field in front of 70,000 fans to be honored before the game.

Maddox has been going to Hawkeye football games since he was 2 years old. Born and raised an Iowa fan, he loves football, and it breaks his heart that he will never be able to play the sport, said his mother, Jen Smith.

At age 5, Maddox was diagnosed with neurofibromatosis, a disease that caused his nerve endings to grow tumors. When he was 8, doctors found a tumor the size of a golf ball in his brain, unrelated to his neurofibromatosis. He has been in and out of the University of Iowa Stead Family Children’s Hospital for half of his life, but today, he’s healthy, taking medicine every day and avoiding rough activities.

Through the Kid Captain program, Maddox stood on the field of Kinnick alongside the Iowa football team, toured the stadium, saw his face on the Jumbotron, and even played a pickup football game with an NFL player. The Hawkeye coaching staff encouraged Maddox, saying he could still love football, maybe even coach football, even though he couldn’t play the sport.

“That was huge for us, to have people who weren’t [his parents] telling him that,” Jen said.

Now in its 10th year, the Kid Captain program has invited back all 134 Kid Captains since the program’s start in 2009 to march in the Homecoming Parade on Friday. Each has been a patient in the University of Iowa Stead Family Children’s Hospital and was honored at a Hawkeye football game.

Of them, 114 families are expected to return to Iowa City this weekend, including four families whose children have died since their Kid Captain experience.

“Even though they aren’t physically here, they’re still part of this team,” said Cheryl Hodgson, the director of marketing for the UI Stead Family Children’s Hospital and founder of the Kid Captain program.

The program blossomed from an idea to make the trip to Iowa City more fun and exciting for a few patients in the Children’s Hospital. Kids from around the state and the country come to the hospital to be treated for a vast range of illnesses, which often prevent them from playing sports and doing other things that healthy kids do.

The Kid Captains for each year are announced in the summer, and the experience begins in August with Kids Day, a special event in which all the Kid Captains for the upcoming season come to Kinnick Stadium to get an exclusive behind-the-scenes tour, walk through the tunnel, and meet the players and coaches for autographs.

Hodgson remembers every single Kid Captain. She said all are strong and inspiring in their unique way.

“We all have bad days, but I’ll look at their pictures or read their stories and be reminded that there are people that are going through things that are so difficult at such a young age,” she said. “They’re so optimistic, and they just want to get out of the hospital, and go back to school, and be a kid.”

The Ortman family — Chris, Missy, and their five kids — made the seven-and-a-half-hour trip several times a year from South Dakota to the Children’s Hospital for their son Lincoln’s treatment. In 2014, the family moved to North Liberty to be closer to the hospital, because Lincoln had had a multitude of medical challenges since he was 5 months old.

Looking at him now, at age 8, you would have no idea he had been so sick. He is a star swimmer, faster than most kids in his age group.

In 2015, when Lincoln was 5, he was the honorary Kid Captain for an away game at Indiana on Nov. 7. Although away-game Kid Captains don’t have an on-field experience, Lincoln and his family attended the Pittsburgh game that season — one many Hawkeye fans remember well, as a last-second kick broke the tie and put the Hawkeyes one step closer toward the team’s 12-0 regular season record.

The game was Lincoln’s favorite part of being Kid Captain (though he admits he doesn’t remember a lot). For his parents, however, the experience meant everything.

“It turned a negative into a positive for him,” Chris Ortman said. “Since kindergarten, he would come to school different in some way, but this was an awesome different instead of a different that people don’t understand.”

Missy Ortman said her favorite thing was getting to share her son’s story. By doing this, she connected with others whose children were going through something similar.

“When he questions why he was made this way, why he has to struggle like that, we can remind him that not everyone gets to be part of the Kid Captain program,” she said. “When you’re healthy, you don’t get that experience.” 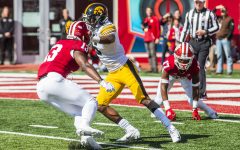 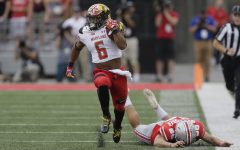 By the numbers: Maryland Terrapins 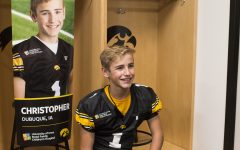 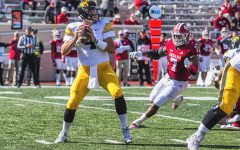 College football Week 8: Iowa moves up in the rankings

Since its humble beginning as an almost spur-of-the-moment idea in 2009, Kid Captain has evolved into a yearlong operation for a team at the Stead Family Children’s Hospital. With 300 to 400 nominations each year, a group of doctors, nurses, and other hospital staff narrow down the bunch to 13 kids who “embody what it means to change medicine and change kids’ lives,” Hodgson said.

She vividly remembers the very first Kid Captain, Jack Koehn, who had hemophilia and other conditions that prevented him from playing sports such as football. He stood on the sidelines with the Hawkeyes and his parents were tearful when the all of the fans in Kinnick turned their attention to Jack, Hodgson said. From then on, she said, she knew the program was going to be special.

“I’ve been doing this for 10 years, and I get emotional every time because so many of these kids love sports and because of what they’re living with they may not be able to play or they’re huge Hawkeye fans,” she said. “To stand out in the middle of Kinnick Stadium to be recognized as a captain is something that very few people will have in their life.”

When Iowa played Purdue in 2015, Kinnick Stadium was coated in a blanket of fresh snow. Kid Captain Beau Atkinson’s mom, Kari, insisted the then-13-year-old wear his coat and snow pants when he went out on the field, but he refused.

“I said to Brian Ferentz, I’m going to get the mother-of-the-year award, with him not wearing a coat,” Kari Atkinson said. “Luckily, the student section was giving out blankets, and they gave him one and he walked out with that at least wrapped around him.”

Ferentz told her that Beau was the first Kid Captain to have a snow game.

Beau, now 16, has hemophilia, which means his blood doesn’t clot normally. He requires regular injections of medication, which he administers himself. Playing sports is risky with his condition, but he plays the cymbals in the Marching Band at school and trumpet in Concert Band.

The Atkinsons are a Hawkeye family, and Kari said Beau loved the experience of meeting the players and coaches. For her and her family, the experience offered them a chance to bring awareness to hemophilia, a rare illness. The UI Hemophilia Clinic serves 400 patients from Iowa and Illinois.

The Kid Captain program could not exist without Iowa football, Hodgson said. In fact, the players and coaches treasure the experience of getting to know the Kid Captains at Kids Day in August and when each child is honored throughout the season.

“It really puts it into perspective how lucky we are to do what we do,” Iowa quarterback Nate Stanley said. “Being able to see the Kid Captain in the tunnel before we go out, it’s something that’s pretty special and reminds me just how lucky I am to be able to go out there, and play, and do what I love.”

Our struggles as student-athletes are nothing even comparable to what they may be going through.”

Knowing how different the experience of watching a game from the sidelines is from being in the stands, Iowa head coach Kirk Ferentz said the program is special, not only for the kids but for him and the team.

“It’s selfish, but it’s a great reminder for our players of how fortunate they are,” Ferentz said. “We choose to play football and coach football, and we’re able to do it — not everybody is that lucky.”

Former Hawkeye Josey Jewell, now a linebacker for the Denver Broncos, cared deeply for the Kid Captains while he played for Iowa. He had a special connection with a Kid Captain in 2017, Logan Manderfield, who was from Waucoma, Iowa, a town not far from Jewell’s home in Decorah.

Jewell has even attended an annual 5K for Logan, who has Duchenne muscular dystrophy.

Even after heading to the NFL, Jewell said, the kids at the the Children’s Hospital hold a special place in his heart.

“Our struggles as student-athletes are nothing even comparable to what they may be going through,” Jewell said. “For the kids to be recognized through the Kid Captain program is extremely special and gives them a bright spot in their lives.” 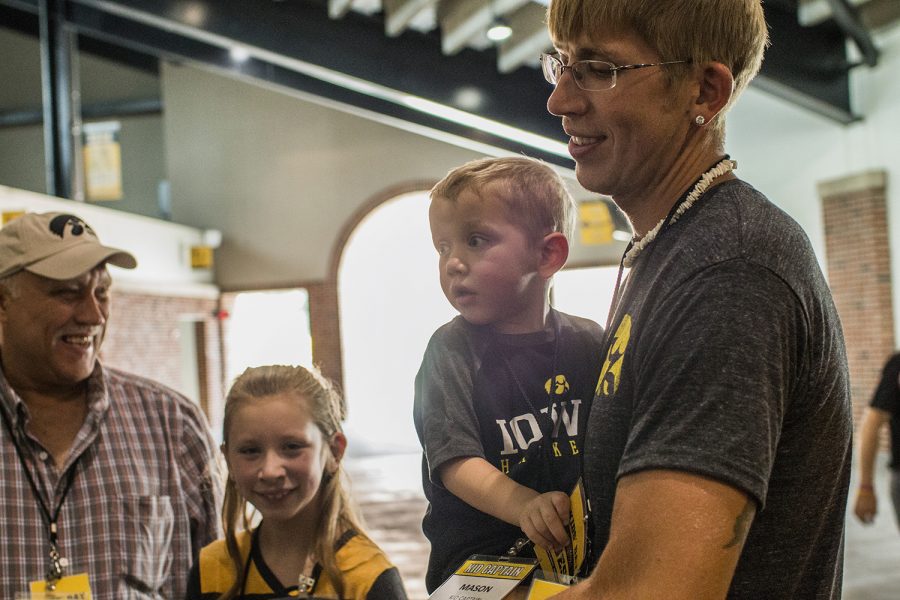