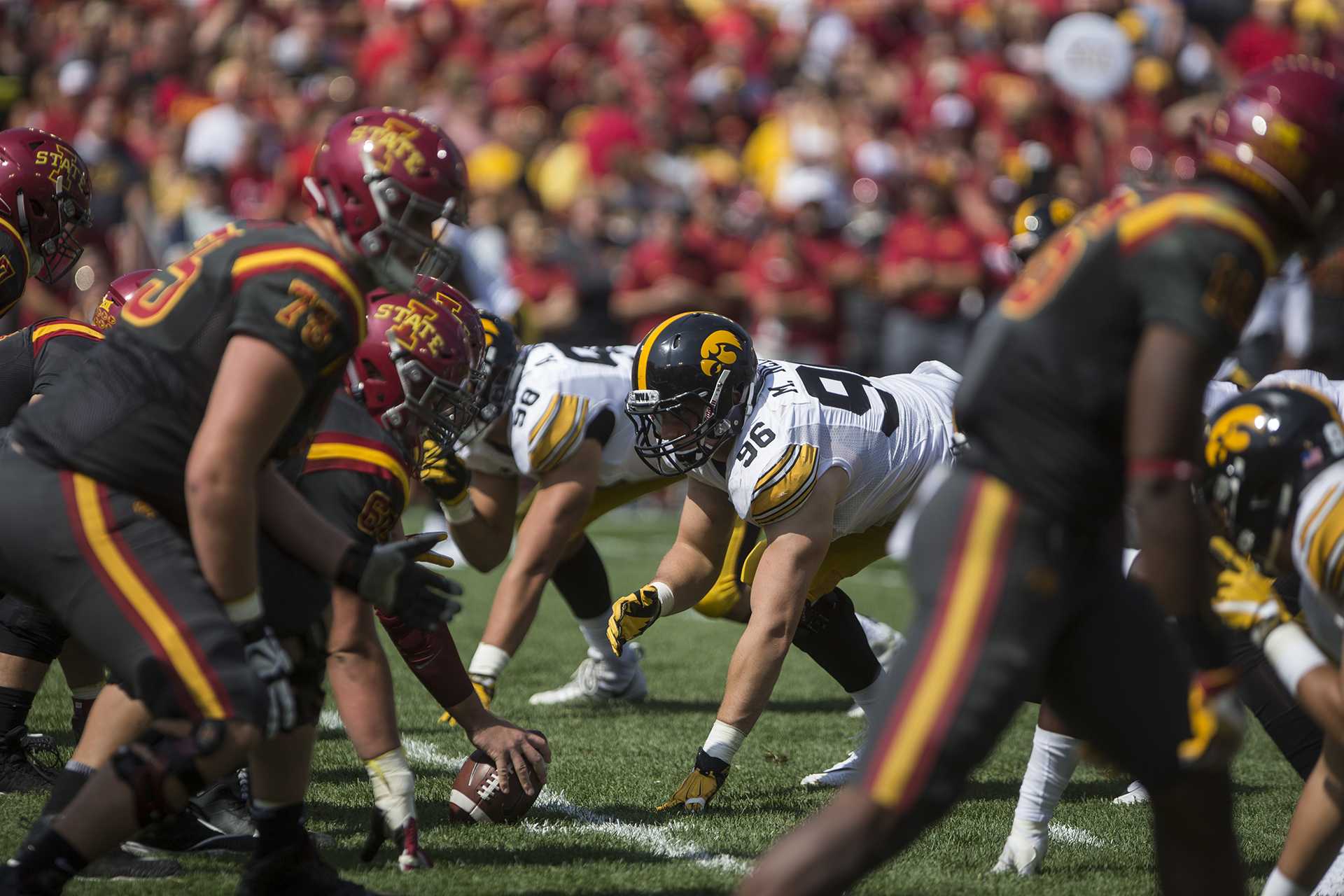 Iowa defensive lineman Matt Nelson is seen on the line of scrimmage during the game at Jack Trice Stadium on Saturday, Sept. 9, 2017. (Ben Allan Smith)

Iowa defensive lineman Matt Nelson is seen on the line of scrimmage during the game at Jack Trice Stadium on Saturday, Sept. 9, 2017.

Matt Nelson grew with a desire to play football and pursue a career in the medical field. Years later, he’s doing both.

Matt Nelson isn’t just a central piece in one of the country’s best defensive lines — he’s a smart and driven biology and human physics major who spent his summers in the classroom and a UI research laboratory. So, in terms of where the 6-8 Hawkeye’s future may take him, this year is especially important: Come spring, the UI senior may have to choose between enrolling in medical school or, if the stars so align, suiting up for NFL boot camp.

Nelson loves playing football, and he admits that if the NFL ever comes calling, he will certainly pick up the phone. But Nelson is a dual threat: He hopes to become a surgeon one day, and his vision is to become the NFL doctor who sees the most crucial cases.

But those goals to pursue medicine didn’t stem from playing football. When Nelson was in fifth grade, growing up in his hometown of Cedar Rapids, his grandfather, Lowell Palmer, was diagnosed with Parkinson’s disease.

“At first, I really didn’t understand what it was,” Nelson said. “Sympathies out to everybody who has someone in their family with dementia or Parkinson’s, something like that, because it’s a truly dreadful disease.”

Before his diagnosis, Palmer was the type of grandfather who went sledding with his grandchildren, even at age 70. He had 15 grandchildren, but Palmer shared a unique bond with Nelson. 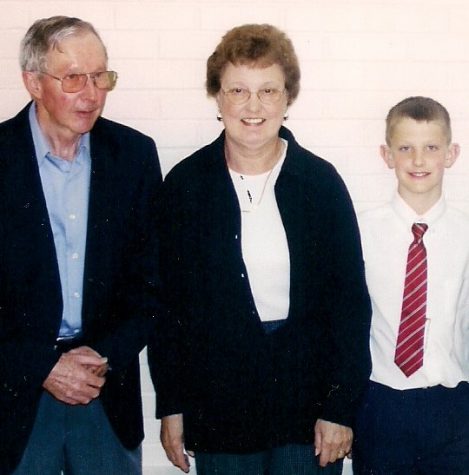 According to his mother, Nelson was the type of boy who was highly curious, moved 110 mph, and always held a fascination for science. For Christmas, he’d request science books, and he and the rest of his family would often conduct chemistry experiments at home for fun.

Palmer had the ability to hone in Nelson’s widespread inquiries and capture his attention.

“I think more than anything, my dad had the ability to be able to really get Matt to focus,” Julie Palmer, Nelson’s mother, said. “It was interesting to watch Matt because he and my dad would converse, and Matt would just stop in wonderment, in terms of whatever my dad was telling him.”

As Lowell Palmer’s battle with Parkinson’s continued, Nelson, along with his three siblings, struggled to watch their grandfather become emotionless.

“Parkinson’s is so crappy because it basically takes away somebody’s facial expressions,” Julie Palmer said. “Here, he lost his very animated grandpa laugh and do all those sorts of things with him, and all of a sudden, toward the end of those last couple of years, he would not be able to show on his face that he had joy; he could not express on his face that he was feeling joy or if he was angry. He just had this flat sort of aspect on his face all the time. That was hard for the boys.”

He left Nelson not only the memory of having been a wonderful grandfather, he also became the impetus for Nelson to pursue his dream of helping others through medicine. 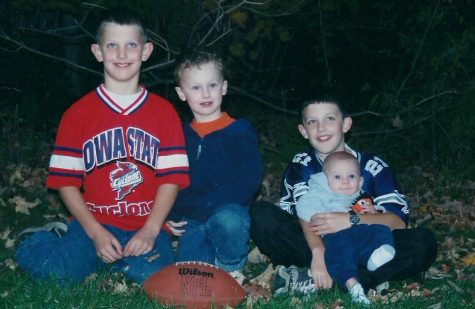 Matt Nelson, age 8, sits with his three brothers and a football. (Julie Palmer/Contributed)

“He’s an inspiration for me to go into the medical field,” Nelson said. “Seeing something like that happen to a person you love so much, it really kind of drives you.”

Since then, he has balanced playing football full-time at Iowa while also pursuing a future in the medical field, majoring in biology and human physiology.

A three-time Academic All-Big Ten honoree, Nelson doesn’t keep track of his hours spent studying, but he studies to the point where he feels comfortable for whatever tests or homework he has in the upcoming week.

That studying often gets in the way of a social life.

“You don’t have to be buried in a book every single night,” fellow defensive lineman Parker Hesse joked during Big Ten media days.

Hesse and Sam Brinks are the two leading the teasing, Nelson said, but it’s all in good fun.

“I always have some homework or some test coming up, and I end up studying and not hanging out with them, so I get a little bit of flak from them,” he said.

On top of having summer classes, Nelson also spent his summer working in a research lab for the second year in a row, focusing on developing breakthroughs and conducting experiments in the orthopedic and neurosurgery area.

He wanted to get in here and be coached, and I’m thinking, boy, this is unusual for this day and age.”

But when it comes to football, Nelson can’t get enough of it.

The defensive tackle made an immediate impact before his first season even started, something head coach Kirk Ferentz took note of.

“What I remember distinctly was he showed up at our camp like two weeks later and couldn’t get enough coaching,” Ferentz said. “Like he kept getting in the front of the line. He wanted to get in here and be coached, and I’m thinking, boy, this is unusual for this day and age, for a quote-unquote big recruit. He wasn’t trying out, he just wanted to get better as a football player. That’s how he operates. He’s a really sharp guy, great teammate, and then he just continually improves.”

Last season, Nelson made the switch from defensive end to defensive tackle, a position that doesn’t see production necessarily reflective in the box score. He finished 2017 with 23 tackles, 2 for a loss, 1 sack, and 2 pass deflections. During his sophomore season, he had 42 tackles (6 for a loss), 5 sacks, and 2 fumble recoveries.

So far in 2018, the senior has 9 tackles, including 1 sack, and he’s a key cog in a Hawkeye front four allowing the fifth-fewest rushing yards per game in the country.

Just as he’s busy balancing research, classes, and football, Nelson also deals with the process of applying to medical school, and it isn’t a free run at the quarterback by any means.

Nelson explained that the first step in applying is filling out the American Medical College Application Service and sending it to desired medical schools.

The schools that like Nelson’s application will get in touch with him and have him fill out a secondary application, which can lead to an interview and more. But it’s a tedious and time-consuming process.

“They want to know everything about you, so they try to look at you [with] a holistic approach to admissions and that sort of stuff,” Nelson said.

Nelson won’t hear back for sure until the spring on how he did.

Nelson said that he’s looked at a mostly schools in the Midwest, including a few in Chicago, but ultimately, he estimated he applied to anywhere in the neighborhood of eight to 10 different institutions.

He joked that realistically, he would attend whichever school would accept him, but he did have one specific program in mind.

“Iowa would be a dream school for me,” he said.

But at the same time as when he’d be hearing about his medical-school applications, the Iowa football program will host its Pro Day, an event in which NFL scouts and personnel venture to Iowa City and watch Hawkeye draft prospects go through various drills.

Football is an unpredictable sport, but in the event that Nelson would have to make a choice between enrolling in medical school right out of college or going to the professional leagues, he would have a tough decision to make — both options are on his radar.

“I’d like to go to the NFL if they gave me a shot, and then I’d give that one go-around,” Nelson said. “If that doesn’t work, I’ll focus solely on the medical-school aspect. I’ve been training so long for the NFL, so I might as well give it a shot while I’m here.”

Some might think the NFL aspirations are out of Nelson’s reach, but not many people could have predicted his track to where he stands now.

His dream, to make it in the NFL or to repair player injuries, becomes even more tangible each day.

“I will say this over and over again: the greatest gift a parent gets is to watch their kid chase after their dreams,” Julie Palmer said. “I have a front-row seat watching Matt chase after his dream, just like I do with my other sons. There is nothing more rewarding than that.” 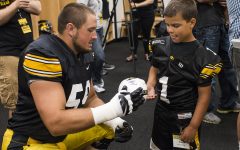 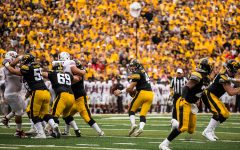 Iowa hunts for turnovers against Minnesota 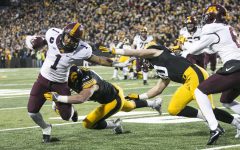 By the numbers: Minnesota Gophers 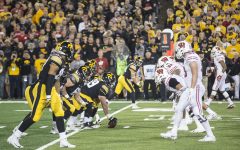