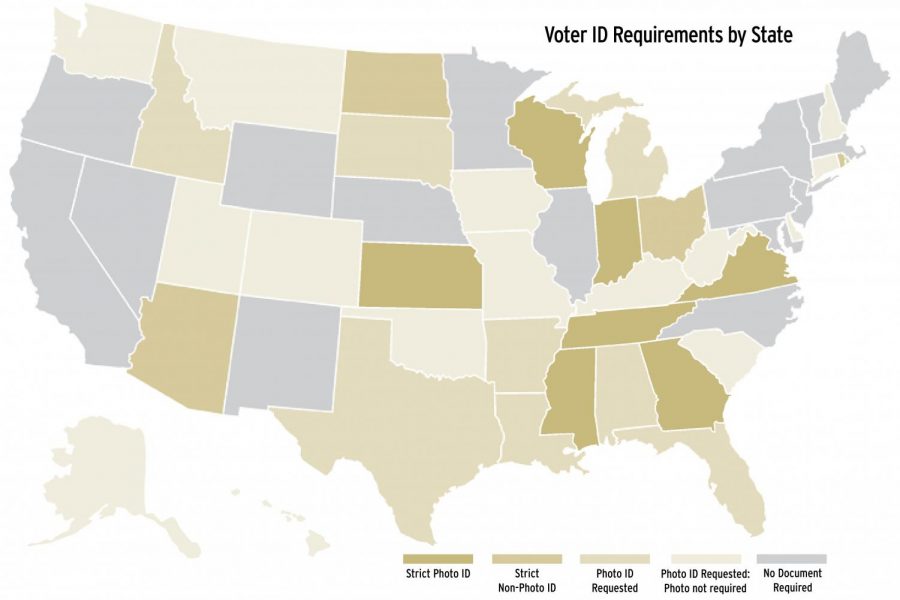 Voter-ID law seen as unnecessary by some Iowa county auditors

In interviews with more than a dozen county auditors, many said they believe Iowa’s voter-ID law is unnecessary.

When voters go to the polls in 10 weeks for the midterm elections, the top 99 elections officials must stick to the rulebooks despite some opposing a controversial Iowa voter-ID law.

The law, passed in 2017, will require voters to bring identification to the polls beginning in 2019 in an effort to secure elections against “fraudulent votes.”

“I’m against it. I’ll be open and honest,” said Johnson County Auditor Travis Weipert, a Democrat. “We’ve gone how many years not requiring ID? We’ve done a great job in using ID to verify addresses when voters register.”

Story County Auditor Lucy Martin, a Democrat, said she believes Iowa’s elections were already secured by requiring proof of address when registering to vote. Though, she said, she didn’t want to continue “banging her head against a brick wall” in continuing to argue about it.

“What fell off in this entire conversation is how we verify our voters,” Martin said. “The whole point of voter registration is verifying people for an election. If your name is on the list, we’ve already approved you to vote … You’re duplicating an effort that you’ve already gone through.” 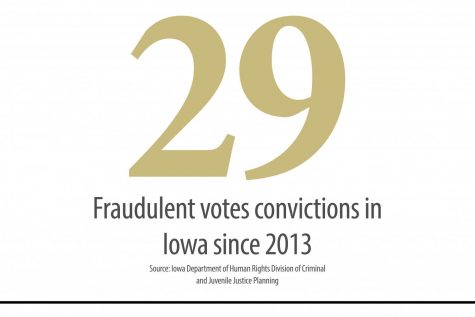 In Iowa, county auditors operate as the chief election officials for their counties. As partisan officials, they are elected to four-year terms. Leading up to elections, their duties ramp up as they register voters and supervise ballot-printing and absentee voting for their counties.

This year, auditors are educating their constituents on the relatively new Iowa law, leaving some sandwiched between Iowa Code and what they believe to be right.

In the spring of 2017, Iowa’s Republican-dominated Legislature passed a law largely along party lines that would require registered voters to provide identification at the polls starting in 2019.

This November, in a “soft rollout” of the law, voters can sign an oath verifying their identities if they don’t have IDs. Next year, the oath option will not be available.

Iowa Secretary of State Paul Pate, a Republican, says the law secures Iowa elections to make it “easy to vote but hard to cheat,” as his office states, but critics argue the law is unnecessary and will deter voter turnout in Republicans’ favor.

Iowa is one of 34 states that have implemented ID laws at the polls. The seven states with the strictest photo-ID laws passed the laws when Republicans controlled all three branches of state government.

However, county auditors stick to the rule books despite partisan opinions.

“I certainly have an opinion, but my opinion doesn’t matter at this point in time,” said Linn County Auditor Joel Miller, a no-party auditor previously registered as a Democrat. “Will it cause any problems? We’re going to find out this fall, when we have the general election and in 2020.”

It’s just like locking your door when you leave your home — you secure what you value. The chances of your home getting robbed might be slim, but it’s important to add that level of security.”

Partisan tasks typically don’t emerge in a county auditor’s duties. They are charged with an array of nonpartisan responsibilities including advising on the county budget, providing recording help to county supervisors, calculating county employee paychecks, and sometimes providing general maintenance for county courthouses.

Elections are no different. When any state or county official takes office, each signs an oath to uphold the law, marking the official’s highest priority as the Iowa and U.S. Constitution. He or she must “faithfully and impartially, to the best of my ability, discharge all the duties of the office … as now or hereafter required by law.”

But the officials can advocate for or against laws.

The Iowa State Association of County Auditors, which represents auditors in the state, opposed Iowa’s voter-ID bill when it was introduced in 2017.

Pate reprimanded county auditors in Iowa in a March 2017 conference for what he said were partisan gibes aimed at undermining the legislation, which was still being considered by lawmakers and had not been signed into law. Once passed by the House, Pate said lawmakers included 10 out of 11 recommendations from an ISACA elections committee.

Auditors are overwhelmingly Republican in Iowa. Of the 99 counties, Republicans control 65 auditor seats, 31 have Democratic auditors, and three auditors are registered as no-party.

Now that the voter-ID bill has been signed into law, Linn County’s Miller said opinions would have to take a back seat to educating voters about how to vote.

“For some of us, our opinions at that time were ignored, so we are in the phase where we are governing and administering the law,” said Miller, who in December of 2017 announced he would exchange his Democratic status for a no-party status to advocate for nonpartisan county officials.

Not all county auditors agree about the law, but all concluded that their main priority would be boosting turnout of voters of both parties.

“… The rules are in place, and we will follow those, administer those, and generally, it’s just making sure everyone understands the requirements,” he said.

When it comes to the necessity of the ID requirement, some county auditors The Daily Iowan interviewed were unsure how to respond. Others had a ready answer.

“Parts of the law make it more difficult to vote,” Black Hawk County Auditor Grant Veeder said. “Voters have to be well-aware in advance and have IDs. It creates unnecessary confusion about voters’ eligibility status.”

Voter-ID laws, at least those at the polls, have never been demonstrated to be necessary. We’ve never had any sort of systematic voter fraud at the polls.”

Voter fraud is rare in Iowa. Of the millions of votes cast, there have been 29 voting-fraud convictions since 2013, according to data from the Iowa Department of Human Rights Division of Criminal and Juvenile Justice Planning. A $250,000 Department of Criminal Justice inquiry in 2014 found 117 cases of voter fraud.

Nationwide voter fraud is also low. In January, President Trump abruptly shut down a committee that was supposed to examine evidence of voter fraud nationwide, which he claimed, without producing evidence, plagued the 2016 election.

Despite Iowa’s low voter-fraud numbers, Secretary of State spokesman Kevin Hall said, “One fraudulent vote is too many.

“It’s just like locking your door when you leave your home — you secure what you value. The chances of your home getting robbed might be slim, but it’s important to add that level of security.”

Julia Helm, a Republican auditor from Dallas County, was elected in 2016. She noted that she hasn’t been in the Auditor’s Office long enough to know if the ID law would affect turnout but said, “Many voters are already used to bringing their IDs and getting them scanned.”

Dallas County is one of 92 Iowa counties that use electronic poll books on Election Day to keep track of registered voters. As people arrive to vote, poll workers scan voters’ IDs to quickly verify they are registered to vote in the county. Before the voter-ID law was passed, poll workers could ask for the person’s name and enter the driver’s license number.

“The clear reason that laws like this are being implemented is to gain a political advantage. Voter-ID laws, at least those at the polls, have never been demonstrated to be necessary,” Andersen said. “We’ve never had any sort of systematic voter fraud at the polls.”

There is mixed evidence on whether the laws could affect the outcome of an election, but studies show stricter laws tend to decrease the number of Democratic and minority voters.

In a Michigan study of a law similar to Iowa’s voter-ID law, researchers collected affidavits signed by voters that affirmed their identities in lieu of IDs. After analyzing the affidavits, they found 28,000 voters, 0.6 percent of the population, didn’t have IDs. They estimated nonwhite voters were between 2.5 and 6 times as likely as white voters to lack IDs. 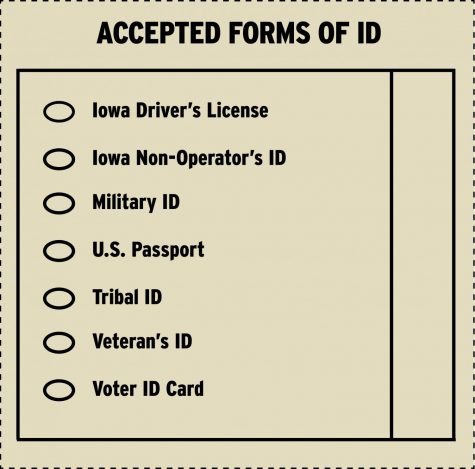 Iowa’s law has attracted national attention. President of Let America Vote and Democratic mayoral candidate for Kansas City Jason Kander rolled through Iowa last week, making stops by ISU and the UI to encourage students to intern with Let America Vote, which aims to create political consequences for elected officials who advocate for laws such as voter-ID laws.

“I’m here because unfortunately, Iowa has been thrust on the frontlines of voter suppression,” he said. His next stop will be Tennessee, a state that moved to implement a strict photo-ID law in 2011.

Most county auditors conceded that despite individual opinions on the law, the debate about the bill was moot. Now, it’s up to an ongoing lawsuit filed by Latinx advocates and an ISU student to decide the law’s constitutionality.

Auditors are lasering their focus on encouraging voters to come in flocks to the polls.

“County auditors, whether they supported the law or not, care about ensuring all eligible voters are able to cast ballots,” said Hall of the Secretary of State’s Office.

Editor’s note (9/1/2018): A previous version of this article misstated when Linn County Auditor Joel Miller switched his party status from Democrat to no-party. It was in December of 2017. The DI regrets this error.