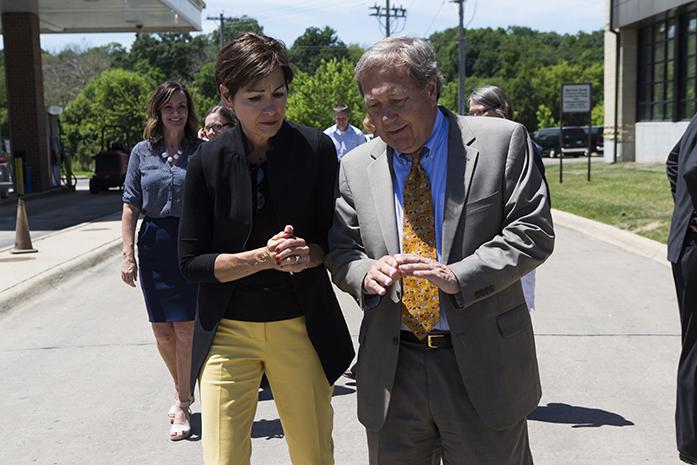 FILE – Iowa Gov. Kim Reynolds talks with University of Iowa President J. Bruce Harreld after a visit on the University of Iowa campus to learn about diversifying biomass fuel sources on at the Cambus Maintenance Facility on Wednesday, June, 7, 2017. Reynolds and Lt. Gov. Adam Gregg met with Harreld and other university experts on their visit while discussing the university’s biomass portfolio. (The Daily Iowan/Joseph Cress)

As Iowa disinvests, the issue of higher-education funding goes beyond red and blue in Iowa and other state legislatures.

The disinvestment in higher education hasn’t shown signs of slowing in Iowa, but the trend of dwindling state support isn’t mirrored in every state.

On March 28, Gov. Kim Reynolds, R-Iowa, signed off on midyear cuts to the state Board of Regents universities’ budgets for a second-consecutive year after the Legislature passed $10.9 million in reductions to regents-controlled entities. Cuts total nearly $5.5 million for the University of Iowa, $5.4 million for Iowa State University, and $34,362 for the regents’ office, regional study centers, and Iowa Public Radio.

In the latest round of budget cuts, $35.5 million was cut from state programs and services, meaning the cuts to the regents made up almost one-third of the deappropriations despite higher education only composing 7 percent of the state’s general-fund budget. To compensate for the state’s projected revenue shortfalls, the regent universities have seen their budgets slashed by more than $40 million in a matter of approximately 12 months.

Legislators on both sides of the aisle point fingers at the other side as part of the problem at the root of the budget cuts, but the numbers show there’s more than partisan finger-pointing at play as other states boost funding for higher education.

The UI compares itself with a group of 10 schools with similar campuses and health-science centers — some being Big Ten schools, some from outside the conference. Seven of the 10 states with schools in the peer group managed to increase appropriations for higher education. Of those seven states, six have Republican-dominated legislatures, and four are led by a Republican governor, meaning four of those states, like Iowa, are under a Republican trifecta. 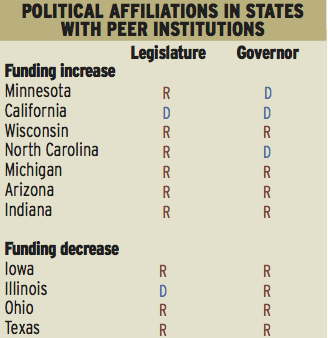 How did we get here?

Universities across the country have struggled to get higher-education funding to return to pre-2008 recession levels. Only six states have reached or surpassed pre-recession funding levels.

Though the disinvestment in higher education has been going on for decades, this trend was amplified by the states’ struggles to recover economically after the recession. They generally have not taken funding levels for higher education up to previous levels, and state funding has begun to make up smaller slices of the general-education-fund revenue pie.

Now, more of the burden of financing higher education has shifted to students and their families.

While funding sources have shifted over the years, the actual dollar amount of state appropriations has essentially remained flat with fiscal 1998 funding levels nearly equal to the amount appropriated to the universities in fiscal 2018.

In that same time period, enrollment has spiked, meaning on a per-student basis, financial support for higher education has not kept pace with growth; the amount of available monetary resources hasn’t changed much, but that dollar amount has to be spread among more students. In the fall of 2000, the regents reported an enrollment of 68,930, and in fall 2017, that number rose to 80,066.

To cope with slimmer state appropriations, Iowa’s universities in 2015 launched the Transparent, Inclusive, Efficiency Review to examine spending and better allocate resources. As of September, the universities reported saving a combined $55.7 million.

The UI keeps spending on administrative overhead low and operates 14.5 percent more efficiently than its peers, which Ryan Sempf, the director of government relations and public policy at the Iowa City Area Chamber of Commerce, said shows the university has done a good job of tightening its belt.

“At a certain point, there’s not much left to give,” he said.

The schools we ‘hang out with’

Whether it’s for top faculty or bright students, universities compete for the best. That’s where the peer-group comparisons have a role to play — they help universities determine how they stack up against other institutions and provide insight on what’s working, what’s not, and what can work better.

A factor in that competition is the advertised sticker price of higher education. UI President Bruce Harreld proposed the UI’s plan in August to raise tuition by 7 percent for resident undergraduates each year for the next five years. Since then, Regent President Mike Richards has scaled back that proposal, and the regents have proposed tuition increases under 4 percent.

Harreld’s hopes are to push the UI’s tuition level — the lowest in the Big Ten — to the median of the peer group, though lower tuition increases than requested will make it harder to reach that goal.

The institutions the UI employs as benchmarks that have received an increase in state support see improved outcomes for its students, Harreld told The Daily Iowan in March.

“I can see a direct correlation in terms of resources per student and the graduation rates and GPAs, because they have more money to provide more support mechanisms,” he said.

And Harreld’s correct. Compared with its peer institutions, the UI has the second-lowest retention and four-year graduation rates at 86 percent and 51 percent, respectively.

If a combination of U.S. News rankings, retention rates, and four-year graduation rates are indicators of “the best,” then the University of North Carolina-Chapel Hill leads the UI’s peer-institution pack. It’s fourth in the rankings and boasts a retention rate of 97 percent and an 82 percent four-year graduation rate — the highest in the peer group.

Additionally, UNC benefits from receiving the most revenue per student — approximately $31,000 — compared with the UI’s roughly $21,000 per student. (Revenue includes both net tuition and state appropriations.) North Carolina — which is governed by a Republican Legislature and Democratic governor — appropriated $2.89 billion to the 17-campus UNC system in fiscal 2018 and $2.97 billion in fiscal 2019.

So how does the state do it? North Carolina Rep. John Fraley, R-Mooresville, said his state was no different from others coming out of the 2008 recession. By controlling expenses and cutting taxes, politicians managed to turn the state’s budget situation around, build up the rainy-day fund, and pay off the debt it owed the federal government early.

The state’s budgeting practices leave legislators able to invest in priorities such as education. The focus is on trying to reduce tuition and fees, he said, to ensure North Carolina universities remain a great value compared with those of other states.

“You still have to keep your eye on what the average income is in North Carolina so that people can afford to send their children to school,” he said.

North Carolina Rep. Craig Horn, R-Weddington, who grew up in Illinois and has lived in Iowa, said instead of pointing the fingers at the other party, stakeholders — including the universities — should do a better job of making the case for why higher education is worth supporting.

“Have you lost contact with your people?” he said. “Do they understand what you do and why you do it? Have you pointed your way to the future or are you only satisfying the past?”

When it comes to making these comparisons, UI Student Government President Jacob Simpson said peer-group arguments can be too simplistic. Institutions have to decide whether they operate in the same conditions — the student body, office structure, the culture — but he said it can be helpful to selectively take inspiration from what works at other schools.

“When I think about affordability, I wish we embraced the tuition level that we have as an opportunity,” he said. “… Just to say, ‘Well, our peers are here, therefore we need to be there,’ to me, that just doesn’t explain the whole situation, but I understand it.”

Crossing the hurdle to the finish line of a college career in a timely manner isn’t easy for all students, particularly those most vulnerable to the effects of a tuition increase — under-represented, low-income, and first-generation students. But as Iowa continues to slash funding, the solution has been to offset the cuts by hiking tuition.

“The evidence is pretty strong that when the state does not invest, there is less access for middle-class families and ultimately less opportunity,” said Sen. Jeff Danielson, D-Waterloo.

To mitigate the effects of tuition increases while boosting retention and four-year graduation rates, Harreld has advocated for dedicating more resources to merit- and need-based financial aid.

The state currently ranks last in the nation for need-based aid — a ranking the regents hope to move in a different direction with their fiscal 2019 appropriations request of an additional $12 million to go toward resident undergraduate aid. The Legislature has not made a decision on that request.

Rep. Cindy Winckler, D-Davenport, said she is unsure if the Legislature will approve the financial-aid focus after conversations with her Republican counterparts.

“I think that they want to fill the hole that they created with the deappropriation,” she said, which means the request may be funded, but in essence, there would be no new money appropriated because the universities are starting with a deficit.

A UI survey shows concerns about finances are negatively associated with cumulative GPA. More than half of students report worrying about their financial situations ‘often,’ but 60 percent report the cost of attendance is manageable given the amount of financial aid received.

Simpson sees financial aid as an opportunity for universities to shift the culture to support the most marginalized.

“… We in a sense have more pressures from where revenue sources are coming from to raise tuition, and that means education is becoming more unaffordable,” he said. “At the same time, I think there’s opportunity for our institutions to have agency in that situation and say what students do we really want to support with financial-aid dollars.”

What is the role of higher education in society?

With Reynolds’ signing of the Future Ready Iowa Act on Tuesday, it’s an opportune time to raise the question. The state is aiming to fill a gap in its skilled workforce by ensuring 70 percent of Iowa workers have education or training beyond high school by 2025.

“Fundamentally, the public universities are a task with educating the next generation of productive workers,” said Sen. Joe Bolkcom, D-Iowa City. “Broadly, we’re educating a workforce to go out and create economic prosperity.”

The universities do not only prepare graduates for successful careers. Through innovation, research, and discovery, research universities such as the UI and ISU also spur economic growth.

A 2010 study produced by Pittsburgh-based research consultant firm Tripp Umbach found the UI contributes $6 billion annually to Iowa’s economy. Every $1 in state appropriations results in a greater than 1,500 percent return for Iowans.

Disinvesting in public higher education means risking the loss of those societal benefits, said Sempf of the Chamber of Commerce.

“The biggest concern would be that as you disinvest from the university, it’s not that those costs necessarily go away, especially if we want to be a top-tier university in the area,” he said. “All that does is lower the value of a degree from the University of Iowa.”

If the trend university officials refer to as “generational disinvestment” in higher education continues, Harreld said, he worries the privatization of public institutions such as the UI will limit access.

“… I have a real concern that if all the higher-education institutions like ours are just privates and they’re all funded just through tuition and philanthropy that the ability for first-generation students, under-represented minorities will just diminish terms of access,” he said. “And I think our democracy’s been built on this access point.”