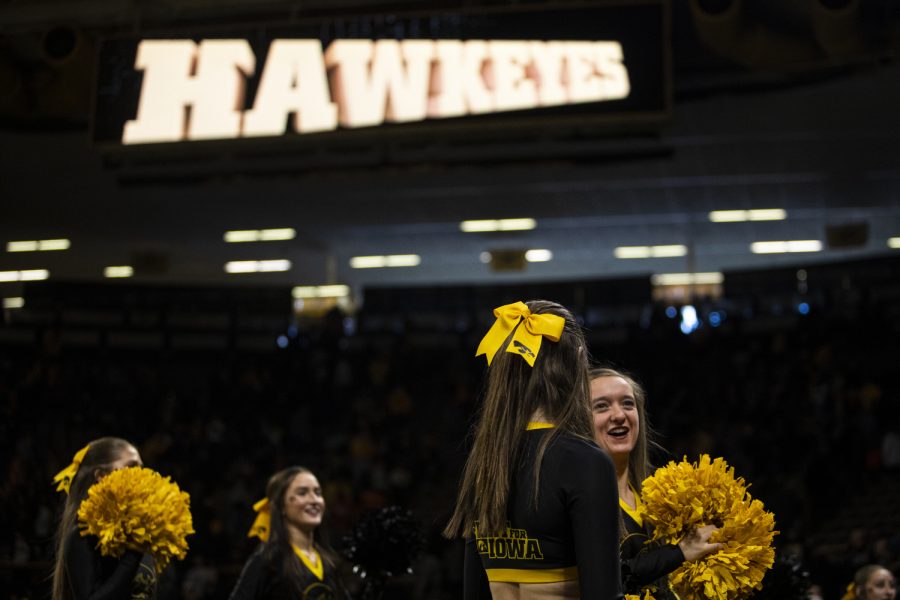 The Iowa spirit squad celebrates a team win during a wrestling meet between Iowa and Cal Baptist at Carver-Hawkeye Arena on Sunday, Nov. 13, 2022. The Hawkeyes defeated the Lancers, 42-3.

Point/Counterpoint | What is the best Hawkeye winter sport?

Opinion writers Luke Krchak and Evan Weidl on what Hawkeye sport to follow this winter.

Iowa women’s basketball is the best sport to watch this winter. With a schedule of big games that pin Iowa against others in the Big Ten, what is there not to like?

The Iowa women’s basketball team is on a five-game winning streak, being 16-4 this season. The Hawkeyes are atop the Big Ten with an 8-1 conference record and a win over previously undefeated Ohio State on Monday night.

Tickets to watch an Iowa women’s basketball game are an affordable $12 to $15, which ensures most students who want to go to the game can go. An average of 10,000 people attend the games and create a good mix of atmosphere and open seating for more students to attend.

Head coach Lisa Bluder is the all-time winningest coach for Iowa women’s basketball, with 16 playoff appearances over her past 23 seasons and a total record of 464-242.

Iowa women’s basketball has put a number of great players into the WNBA, such as Megan Gustafson, who was drafted in 2019 to the Dallas Wings.

Put all these winning stats together, and you get a team and a sport that is well worth the price of admission. Other sports during the winter are either too expensive or don’t have the same level of winning as Iowa women’s basketball.

The University of Iowa offers plenty of exciting sports during the winter season. Whether it’s Caitlin Clark and the Iowa women’s basketball team lighting up the court or the indoor track and field team dominating the Big Ten, winter is an amazing time to be an Iowa sports fan.

But when it comes to Iowa winter sports, none quite stack up to wrestling.

With 24 national championships, Iowa wrestling is one of the most successful athletic programs in NCAA history. The UI has produced multiple Olympic gold medalists, world champions, and countless wrestling legends like Ed Banach and coach Dan Gable.

Wrestling is unquestionably the crown jewel of Iowa sports. The energy in the stands at a wrestling match is only rivaled by a Saturday at Kinnick Stadium. What wrestling means to Iowa is much more than trophies and medals.

Wrestling is special to Iowa and the Midwest because it has a blue-collar, rustic toughness that defines the people of the region. Few sports capture the character and charm of Iowa as well as wrestling, and the passion the fans have for it is unparalleled.

Now is as good a time as ever to be an Iowa wrestling fan. This is thanks to a national championship victory in 2021 and arguably the greatest Hawkeye athlete of all time, Spencer Lee, who is looking to become the first Hawkeye wrestler to win four individual NCAA titles.

With a rich history, consistent dominance, and a special place in the hearts of Iowans everywhere, wrestling claims the throne of Iowa winter sports.