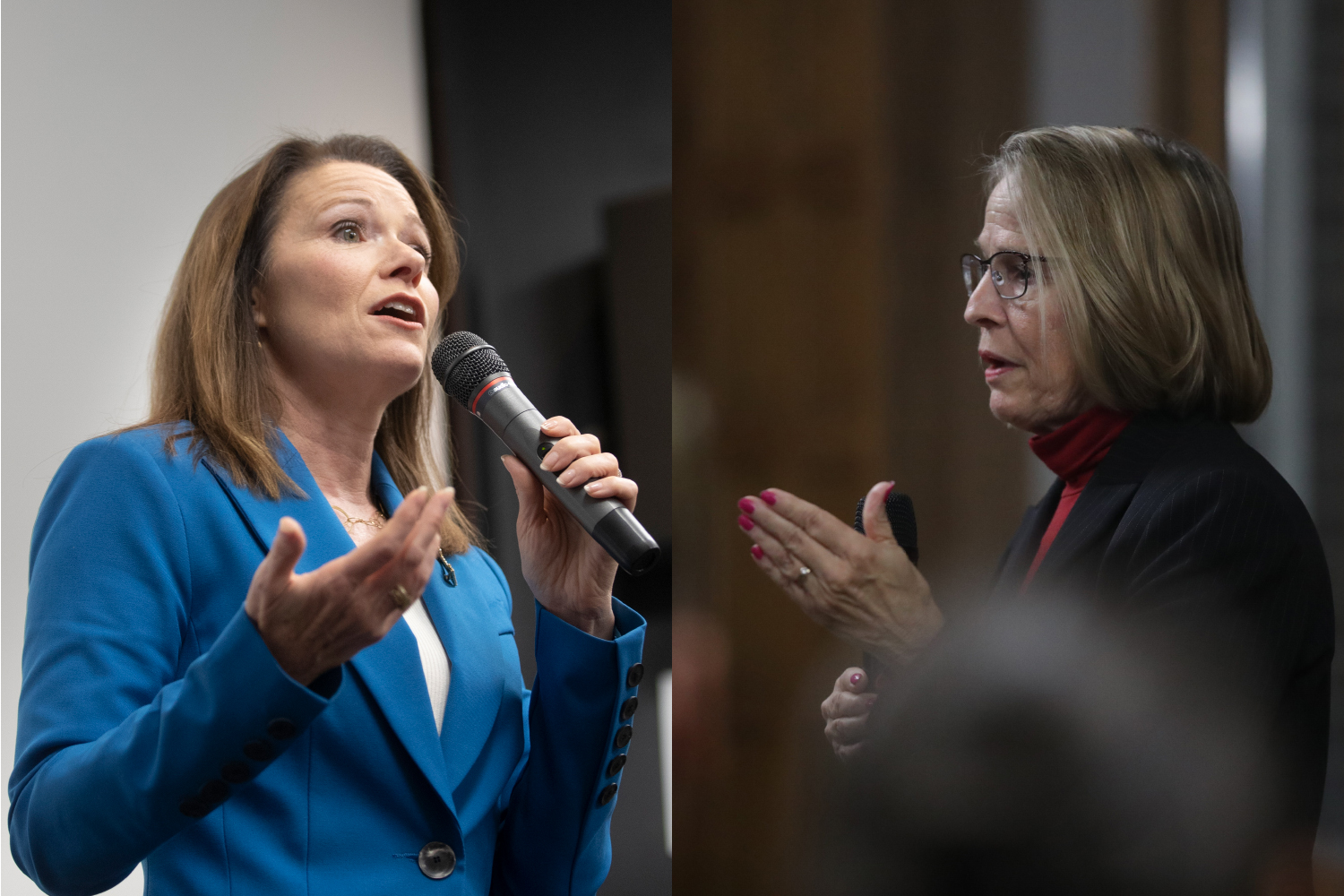 In the packed Black Box Theater of the University of Iowa Memorial Union, Democratic candidate for Iowa’s 1st Congressional District Rep. Christina Bohannan met with Iowa City voters where she highlighted college affordability, voter turnout, and reproductive rights — on the same day and in the same building as her competitor.

Bohannan used her experience as a first-generation college student from a low-income family to inform why she supports reducing the price students have to pay for college. She said if college tuition was the same rate that it is today, she would have never been able to go to school.

“I would like to see a major investment in public education both at the state level and the federal level and we need to increase our student aid and bring down the cost of college education,” Bohannan said.

As a UI College of Law professor, Bohannan says she has paid attention to how the university is funded and hears concerns from students who are worried about being in debt.

“We have stopped funding public education in the state at appropriate levels, and now that is why the tuition has gone up as much as it has,” Bohannan said.

Also speaking at the event was U.S. Rep. Mark Pocan, D-Wisconsin, who served with Miller-Meeks on the Education and Labor committee, said he is not content with her work on college affordability but supports Bohannan’s education plans.

“College Affordability is something obviously that’s very important to all of you, but we have to be able to get something done on that front,” Pocan said. “And I’ll tell you Representative Miller-Meeks is not exactly dealing with the issue of financial aid and affordability in any substantive way.”

Abortion and reproductive rights were other topics that attendees asked about. Bohannan said as a law professor, she read all of the cases regarding abortion that have gone through the Iowa courts and they have stirred her passion for the issue.

Bohannan highlighted her opposition to any abortion ban national or statewide and vowed that if she made it to Congress, she would work to codify Roe v. Wade, a precedent that was overturned by the decision of Dobbs v. Jackson this summer.

“Let me tell you something that history tells us, something loud and clear. Criminalizing or outlawing abortion does not stop abortion, it just kills women,” Bohannan said.

Bohannan claimed that her competitor Miller-Meeks, supports a national abortion ban with no exceptions, citing the Life at Conception Act. As previously reported by PolitiFact Iowa, the bill, which Miller-Meeks cosponsored, does not mention exceptions for rape and incest. Miller-Meeks has also supported other bans that do include exceptions.

When asked by an attendant at her own event in the same building about her stance on abortion, Miller-Meeks stated she supports some exceptions to abortion bans.

“I am pro-life with the exception of life of the mother, rape, and incest,” Miller-Meeks said. “But I also importantly am a mother of a daughter. I’m actively working to provide education, information. I passed a bill for oral contraception over the counter [in Iowa], I will do so at the federal level.”

Bohannan’s event was part of a larger Get Out The Vote movement which aims at increasing voter turnout in both the presidential and midterm elections. Bohannan held the rally in partnership with the University Democrats at Iowa.

Bohannan said she feels good about the election thus far in the race, especially since her competitor won by six votes in 2020.

While standing in front of the crowd, Bohannan encouraged the attendees to get involved in politics. She said it can be done by electing people who prioritize young people in the first place, so they don’t feel as though their voice doesn’t count.

“Please do get involved, because there is so much on the line right now for your future and it’s so easy to get disengaged or is an illusion about our process,” Bohannan said.

University Democrats at Iowa President Nikša Poleksić said Bohannan has a good chance of flipping the congressional seat. He said she is very charismatic and has what it takes to hold this position.

“All anyone needs to do is just listen to both candidates that are running and the choice should be absolutely clear,” Poleksić said.

Bohannan said she has devoted her life to helping students get education, opportunity, and hope for the future, which is why she wants young people to participate in the election and get their friends to vote.

“It is ugly and it takes all of us, my generation, your generation, all of us together to fix this problem,” Bohannan said. “But it’s worth fighting for our country.”

U.S. Rep. Mariannette Miller-Meeks, R-Iowa, said she wants the American Dream to be possible for everyone, so she is working to be part of a government to make that accessible.

The incumbent congressperson shared how she moved out of her parent’s house to pursue a college education and become a doctor after a grease fire accident left her with burns and inspired her to pursue a career in medicine.

The University of Iowa College Republicans hosted Miller-Meeks to speak and meet with constituents on Wednesday in the Iowa Memorial Union in the North Room. On the same evening, Miller-Meek’s Democratic opponent also held an event at the IMU.

The UI was Miller-Meek’s sixth stop of the day in different Iowa counties on the campaign trail. Miller-Meeks said doing her residency in ophthalmology at the university was what first brought her to the state.

In an interview with The Daily Iowan, Miller-Meeks said the one-time debt cancellation does not address high college costs at the source and questioned how fair the program was to people who already paid off their loans.

“One of the things that we can do is to certainly have universities and colleges have skin in the game so that if there are defaults on loans, do you have a university or college pay part of that or a percentage of that?” Miller-Meeks said. “So that the focus is more on advising students, counseling students, like we do with the Iowa Student Loan program.”

Wednesday was the first day for Iowans to vote early and the first day for auditors to send out absentee mail-in ballots. There was a satellite location for Johnson County voters to cast early ballots in the IMU basement. The location will also be open on Thursday and Friday.

As early voters cast their ballots, Miller-Meeks said she is hearing student voters concerned about crime and the environment.

Miller-Meeks is a member of the Conservative Climate Caucus and said she wants to work in a bipartisan fashion to make energy cleaner as well as affordable.

She also said young people are worried about inflation.

“It’s hard on me having to buy a lot of things with inflation, so for me the cost of living is very important,” Clare said.

Clare is originally from Illinois but is registered to vote in Iowa’s newly drawn 1st Congressional District. He said he plans to cast his ballot for Miller-Meeks on election day, Nov. 8.

Miller-Meeks is running for her second term in office. She won her seat with a six-vote margin in 2020. Now, with new district boundaries, she is facing a challenge from state Rep. Christina Bohannan, D-Iowa City.