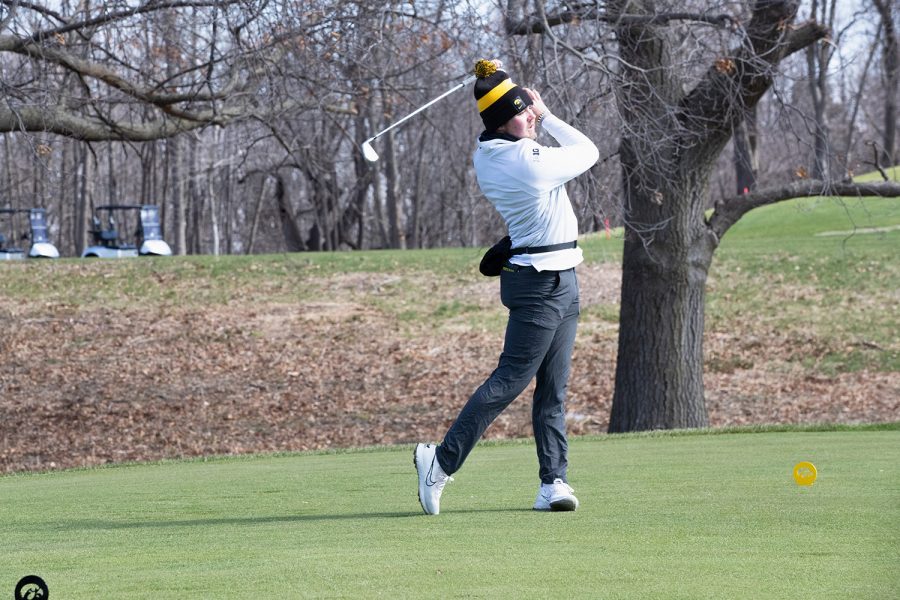 The Iowa men’s golf team will finish in sixth place at the Big Ten Championships in French Lick, Indiana, April 29-May 1.

Were it not for the Hawkeyes’ runner-up showing at the Hawkeye Invitational last weekend in Iowa City, I would have predicted an eighth or ninth-place finish for the team at the conference tournament.

Prior to its annual home event, Iowa had not cracked the top five in any stroke play event as a team this spring. The Hawkeyes’ best showing had been a tie for sixth place at the Schenkel Invitational March 18-20.

Before the Hawkeye Invitational, only one Iowa player had registered a top ten individual finish: junior Mac McClear. In the four stroke-play events Iowa competed in this spring, McClear recorded two top-ten finishes.

On the final day, Iowa’s team score of 280 was the best in the Hawkeye Invitational field by six shots. Two hundred eighty is Hawkeyes’ second-best tournament round of the spring.

The Hawkeyes’ best team score of 274 came at the Puerto Rico Classic. The event was Iowa’s first of the spring, and tournament conditions were warm with calm winds.

The Hawkeye Invitational’s weather was much different. During the final round, the temperature never eclipsed 50 degrees, and the wind played a big role.

While Iowa struggled for four of its five spring tournaments, the Hawkeyes saved their best for last. In a conference with five teams inside the top-50 in the country, I predict the 75th-ranked Hawkeyes will place sixth at the Big Ten Championships.

Usually Chris has more radical golf takes than I do. This week, I’m breaking the mold.

I think the Iowa men’s golf team has everything it takes to place third at the 2022 Big Ten Championships April 27-May 1.

Yes, Iowa’s best finish of the regular season came last weekend at the Hawkeye Invitational. I also understand that the Hawkeyes had a decided advantage over the rest of the field given the event was held at their home course.

All that said, I still believe in momentum — even if some fans and pundits don’t. I think Iowa can use the momentum it gained from its second-place outing at the Hawkeye Invitational to push its way into the Big Ten Tournament’s top three.

Juniors Garrett Tighe and Mac McClear and senior Gonzalo Leal Montero all posted their highest individual finishes of the season at the Hawkeye Invitational. Tighe placed second with McClear and Montero behind him in fifth and sixth, respectively.

Second is Tighe’s best collegiate finish. He missed out on first place at the Hawkeye Invitational by one shot.

With Tighe, McClear, and Montero playing their best golf of the season, there’s no doubt in my mind Iowa can place in the top three at the Big Ten Tournament.

McClear has the firepower to win the event as an individual. He was the 2021 Big Ten Champion at Crooked Stick Golf Club in Carmel, Indiana. McClear shot a 1-under-par 215. He was three shots clear of the rest of the field.

If McClear repeats as Big Ten Champion and Tighe and Montero finish inside the top 10, I like Iowa’s odds to place third or better as a team in this year’s league tourney.