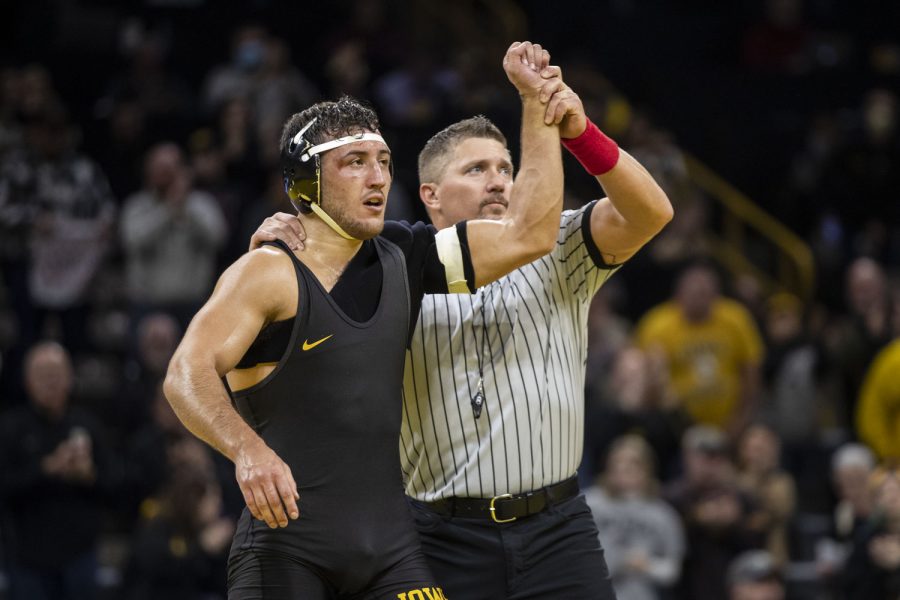 Iowa’s No. 2 174-pound Michael Kemerer celebrates a win over Purdue’s No. 21 Gerrit Nijenhuis during a wrestling meet between No. 1 Iowa and No. 15 Purdue in Carver-Hawkeye Arena on Sunday, Jan. 9, 2022. The Hawkeyes defeated the Boilermakers, 36-4.

Do I think Iowa men’s wrestling can still win a national title this season? Yes. Do I believe the Hawkeyes will do it? No.

Senior 125-pounder Spencer Lee sitting out the remainder of the 2021-22 season to repair torn ACLs in his right and left knees seriously decreased the firepower of Iowa’s starting lineup.

Don’t get me wrong, the Hawkeyes’ backup 125-pounder, true freshman Drake Ayala, is good. But he’s not Spencer Lee.

Ayala has shown he belongs with the top dogs at 125 pounds, defeating two top-10 opponents in his first four matches. He’s gone 3-1 in the Black and Gold singlet this season.

First, Penn State has to underperform. I think that’s a given. Right now, if the Nittany Lions and Hawkeyes each wrestle as well as they can, I think Penn State is the better team. The most recent National Wrestling Coaches Poll reflects that. Penn State rose to No. 1 and Iowa fell to No. 2.

Despite the talent, depth, and experience the Hawkeyes have, I’m not ready to crown them national champions just yet. But, like Jim Carey, I’m saying there’s a chance.

Technically, I’m supposed to fill this space with words that detail the reasons why the Iowa men’s wrestling team won’t win a national championship.

I’m probably supposed to talk about Iowa being No. 2 in the latest NWCA Poll. I’d presumably build my hypothetical argument around now-No. 1 Penn State being too much for Iowa to handle.

Those are the words I was directed to type into this box. Even so, I’m not going to do that.

I pitched this piece and now I’m editing it. So, I’m going to leverage that to my advantage and say what I actually think.

The reporter I’m debating somehow answered the question this very story poses with both yes and no as his answer. Chris Werner cheated in this competition. I guess he can’t be wrong if he picks yes and no at the same time.

So, I’ll give a more straightforward and honest answer. Yes, I believe Iowa can still win an NCAA team title this year.

Senior Spencer Lee is out for the year. We know that. Still, the Hawkeyes have found a viable replacement for Lee in true freshman Drake Ayala.

Winning a national title is about amassing as many points as possible. To do that, wrestlers have to win matches. The more wrestlers the Hawkeyes have in the tournament, the more points they can score.

Iowa certainly has the horses it needs to win enough matches and score enough bonus points to win a team national championship too.

We’ll learn a lot when Iowa and Penn State wrestle each other at Carver-Hawkeye Arena Jan. 28. Until then, I like the Hawkeyes’ odds to repeat as national champions in 2022.