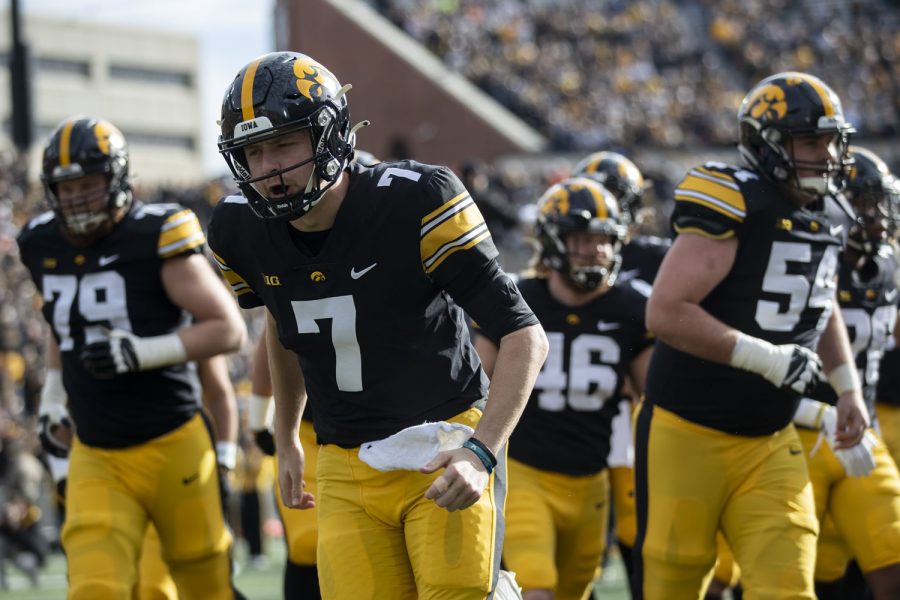 Iowa quarterback Spencer Petras cheers before a football game between No. 17 Iowa and Illinois at Kinnick Stadium in Iowa City on Saturday, Nov. 20, 2021. The Hawkeyes defeated the Fighting Illini 33-23 at the last home game of the season.

Tell me if you’ve heard this one before: It all comes back to quarterback play.

Well, that’s certainly going to be true this Saturday when Iowa takes on Michigan in the Big Ten Championship Game. Because Iowa is not going to win if Spencer Petras doesn’t have one of his best games in a Hawkeye uniform.

Also, let me get something out of the way. I agree with head coach Kirk Ferentz’s decision to start Petras this week. Alex Padilla hasn’t been as effective over the last couple games as he was over his first couple appearances. Petras looked pretty sharp in the second half against Nebraska, much better than he’s looked for most of the season.

Iowa is going with the hot hand in Petras. And the second-year starter needs to prove that that was a good decision.

Here’s what’s not going to beat Michigan: Careless throws that lead to turnovers, being antsy in the pocket because of a potent pass rush or staring down receivers rather than going through reads and finding open targets. We’ve seen Petras do all those things on multiple occasions.

Michigan has one of the best defenses in the country and is by far the best team Iowa has played this season. Ferentz loves to point out that Petras is a pretty experienced quarterback. Petras needs to put that experience to use in the biggest game the Hawkeyes have played in recent years and be the consistent, level-headed leader Iowa needs if it wants to pull off this upset.