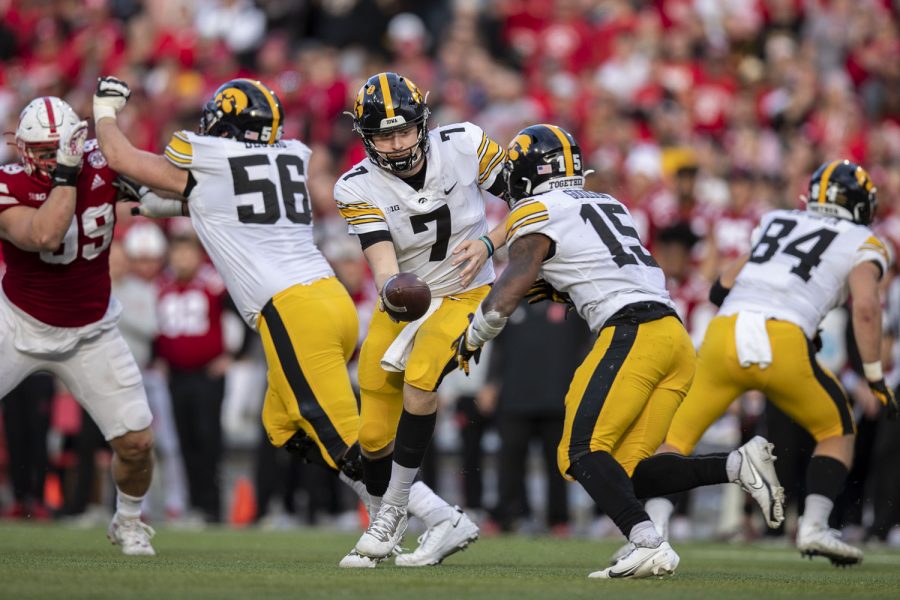 Iowa quarterback Spencer Petras hands the ball off to running back Tyler Goodson during a football game between No. 16 Iowa and Nebraska at Memorial Stadium in Lincoln, Nebraska, on Friday, Nov. 26, 2021. Goodson had 23 carries for 156 yards. The Hawkeyes defeated the Cornhuskers 28-21.

Point/Counterpoint | Who will win the Big Ten Championship Game?

Michigan head coach Jim Harbaugh had an interesting response at Big Ten Media Days in July when he was asked about his team’s goal for the season.

“I’m here before you as enthusiastic and excited as I ever am,” Harbaugh said. “To win the championship. To beat Ohio. [Win] our rivalry with Michigan State and [beat] everybody. That’s what we’re trying to do. And we’re going to do it — or die trying.”

Well, the Wolverines are still alive. Michigan upset rival Ohio State, 42-27, to earn a spot in the Big Ten Championship Game. Iowa snuck in after Minnesota’s upset of Wisconsin. So much for a Badgers-Buckeyes title game. Neither Iowa nor Michigan was necessarily expected to be here in recent weeks. But here we are. Hawkeye fans should be thrilled. Things like this don’t happen to the Iowa City faithful all that often. Savor this feeling. Because Michigan is going to win the Big Ten title next Saturday.

Iowa has overcome obstacles all season on its way to winning the West outright. But this is an entirely different challenge.

The Wolverines are by far the best team the Hawkeyes have played this year — much better than Wisconsin or Iowa State or Penn State or whichever team currently holds that title. If you watched any of The Game on Saturday, you already knew that.

This is definitely Harbaugh’s best Michigan team. The Wolverines have a more than competent quarterback in Cade McNamara, and one of the best rushing attacks in the nation. Defensively, the Wolverines are also elite. Defensive end Aidan Hutchinson has the single-season Michigan record for sacks and had 15 quarterback pressures against Ohio State. Hutchinson, a dark-horse Heisman hopeful, is going to feast on an Iowa offensive line that has struggled to protect the passer at points this season.

Michigan, who may be ranked as high as No. 2 in the College Football Playoff poll this week, may even have a better defensive unit than the Hawkeyes. And believe it or not, their special teams unit may be just as good.

Enjoy this surreal feeling, Hawkeye fans. It may not last very long once Saturday comes around.

Iowa football’s 2021 campaign has been chaotic from the moment it started, to say the very least. The Hawkeyes rattled off six victories in a row to start the season, rising as high as No. 2 in the Associated Press Poll.

After its 6-0 start, Iowa was blown out in back-to-back games by Purdue and Wisconsin. In those games, the Hawkeyes only scored 14 points.

Since their loss to the Badgers Oct. 30, the Hawkeyes have rattled off four consecutive wins over Northwestern, Minnesota, Illinois, and Nebraska

During that stretch, two quarterbacks have played for Iowa: Sophomore Alex Padilla and junior Spencer Petras. Padilla played in relief of Petras against Northwestern and started versus Minnesota, Illinois, and Nebraska.

Petras then relieved Padilla at halftime against Nebraska.

Despite all of that, the Hawkeyes still won the Big Ten West Division outright — thanks to a 23-13 Minnesota win over No. 14 Wisconsin. The Badgers shared the west division lead with the Hawkeyes before Week 13 action began. Wisconsin held the tiebreaker over Iowa because the Badgers beat the Hawkeyes head-to-head.

The Badgers’ loss haphazardly launched the Hawkeyes into an outright Big Ten West title and a league championship game appearance.

In college football, chaos tends to spread from program to program like a communicable disease.

Iowa has been one of the nation’s most unpredictable teams this season. So, what’s the most chaotic thing the Hawkeyes could do next week that would impact the very fabric of this year’s college football landscape?

An Iowa win would probably vault the Hawkeyes to the Rose Bowl and eliminate the Big Ten from College Football Playoff contention because the Wolverines are the league’s only one-loss team left standing.