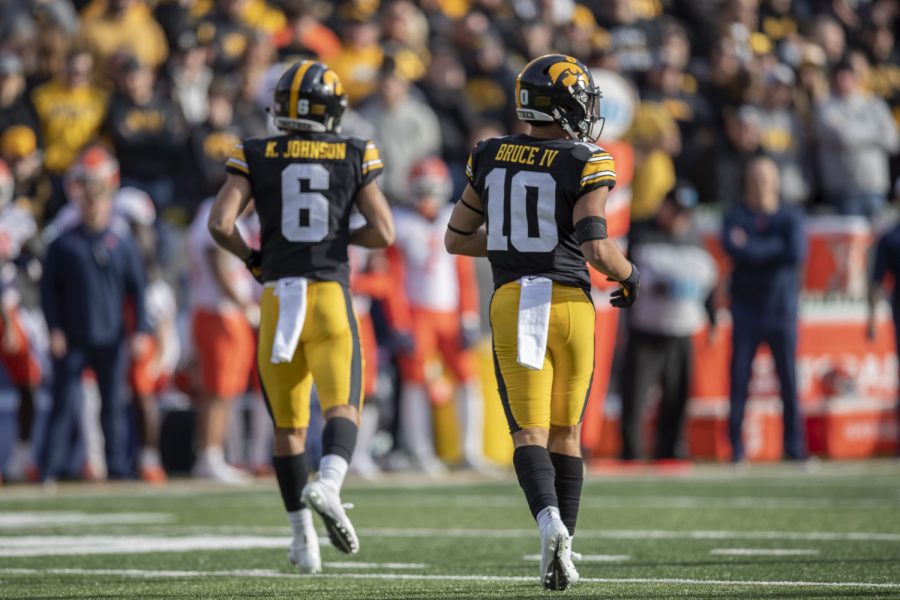 Iowa wide receivers Keagan Johnson and Arland Bruce IV run to their positions on the line during a football game between No. 17 Iowa and Illinois at Kinnick Stadium in Iowa City on Saturday, Nov. 20, 2021. The Hawkeyes defeated the Illini 33-23 at the last home game of the season.

Both players have earned starting roles in their first year with the Hawkeye football programs.

On the third play of the second quarter in Week 4, Johnson was on the receiving end of a 43-yard Spencer Petras pass down the left sideline at Kinnick Stadium. He celebrated with his teammates on the field, made his way back to the Iowa sideline, and immediately looked for one particular teammate: fellow freshman wideout and roommate Arland Bruce IV.

The next week against Maryland, the same thing happened, except the roles were reversed. Bruce caught an eight-yard pass for his first touchdown and made sure Johnson was the first person he found after he ran off the field. After the Hawkeyes took down the Terrapins, Bruce told reporters the feeling was something he couldn’t put into words.

Since the back-to-back touchdowns, Johnson and Bruce’s roles have only grown. Each has worked his way from spring practice, where neither caught a single pass with the first-team offense, to a starting role. Johnson made his first start against Colorado State in Week 4. Bruce recorded his first-ever collegiate start against Illinois last week.

Heading into the 2021 season, many thought this would be Tyrone Tracy Jr.’s breakout year. After former Hawkeyes Brandon Smith and Ihmir Smith-Marsette both left for the NFL, a large void needed to be filled in the Hawkeyes’ receiving game. Tracy, entering his fourth season in the Iowa program, was the easy choice to step in.

But it just hasn’t clicked for the redshirt junior in 2021 as he has just 15 catches for 106 yards and a touchdown. Instead, Johnson and Bruce burst onto the scene.

Although neither player recorded a reception until Week 3, when Bruce caught one pass against Kent State, the pair has accounted for nearly a quarter of the Hawkeyes’ catches and 30 percent of Iowa’s receiving yards since then.

The two freshman wideouts complement each other both on and off the field.

Johnson, a 6-foot-1, 197-pounder from Bellevue, Nebraska, came to Iowa after being heavily recruited as a prototypical big-bodied receiver who could make contested catches deep down the field and take the top off the defense with his speed.

The three-star recruit, according to ESPN, and the third-best high school senior in his home state, chose the Hawkeyes over offers from North Dakota State, Kansas State, Iowa State, and his home Cornhuskers, among others.

During his senior season at Bellevue West, Johnson totaled 1,337 all-purpose yards and 17 touchdowns in just seven games. Against Colorado State after his touchdown catch, Johnson’s second career reception was good for 49 more yards.

Quarterback Alex Padilla said after the Northwestern game on Nov. 6 that Johnson in a one-on-one matchup is something the Hawkeyes can take advantage of.

“Any time I have a one-one-one with Keagan, who’s obviously a great player, I’m very confident in him that he can make a play for our team,” Padilla said.

Johnson also proved he can use his strength and speed to seemingly create touchdowns out of nowhere. Early in the fourth quarter against Minnesota, Johnson caught a screen pass from Padilla near the line of scrimmage, faced two unblocked Gopher defenders, and simply refused to go down on a play that looked doomed.

Johnson somehow managed to stay on his feet to scamper 27 yards for what turned out to be the game-winning touchdown.

How did Keagan Johnson get out of that!? 🤯@HawkeyeFootball | @_keaganj pic.twitter.com/b1Sx8DEfR8

But Bruce, an all-purpose player in high school, was told he would only play running back at Iowa State. The mid-major programs that extended him a scholarship offer — Western Illinois and Tulsa — both said the same thing: He was too small to play receiver. Iowa was the only program that was willing to give him a chance to prove himself as a pass catcher.

“This was the only school that offered me for receiver,” Bruce told reporters on Oct. 26. “So, I just like the fact that they gave me a chance at receiver. Every other school only saw me as a running back and said that I was too short.”

Bruce said his recruiting experience gives him motivation to prove the scouts wrong.

That’s not to say Iowa hasn’t used him as a running back this season, too, because the Hawkeyes have tried to get Bruce the ball in space in as many ways as possible — especially utilizing the freshman’s quickness via jet sweep.

On those plays, Bruce motions from one side of the field and runs toward the quarterback as the ball is snapped. Then, he takes the handoff from the quarterback, still running sideways and then tries to turn the corner around the other end of scrimmage.

At least, that’s how the play is designed. Sometimes, however, Bruce decides to cut it inside and, according to senior wide receiver Charlie Jones, “Run through someone’s face.”

Second half is underway in Iowa City… Here’s a look at Arland Bruce showing absolutely no regard for human life on this touchdown run!@KCCINews @ElginRuckerKCCI pic.twitter.com/bP1SD5YMEE

Bruce, described by his teammate Tyler Goodson as a “Little bowling ball,” who has “All the tools in the box,” has made it a point to be a well-rounded weapon in his first college season.

“One of my main goals was to be used in as many ways as I could, like special teams, receiver, running back, whatever I can do,” Bruce said on Nov. 9. “I work on all aspects of my game in the offseason, so I think that’s just what I focus on.”

Bruce has six rushing attempts this season for 46 yards — averaging nearly eight yards a run. Two of those six attempts have ended over the goal line.

On the field, Johnson brings game-changing speed and a downfield threat while Bruce adds the versatile weapon who is always dangerous with the ball in his hands.

“He’s more of a deep threat and I feel like I can do … I can run the ball and I’m more of a short to medium, quicker guy,” Bruce said.

Off the field, the two are roommates, and Bruce said they have the same goals and intentions: Do whatever they can to help the Hawkeyes win.

Last winter, both Bruce and Johnson enrolled and joined the Iowa football program a semester early in hopes of making an impact. Bruce admitted he was pretty confused learning his third offense in three years.

Bruce transferred from his hometown Olathe North High school in Kansas to Ankeny before his senior year of high school. But he and Johnson have done all they can to learn the playbook and gain as much knowledge about the offense as fast as possible.

Jones said that both Bruce and Johnson have learned the system really quickly, asked questions in meetings, and worked hard to earn opportunities on the field.

Head coach Kirk Ferentz said the receivers have shown, in practice and games, that they deserve to be where they are and are committed to becoming the best players they can be.

“They’ve earned everybody’s confidence, just through their play. They practice the same way,” Ferentz said on Nov. 9. “Obviously, we don’t tackle in practice like that. But they play, they’re focused. They’re beyond their years, focused, and take practice really seriously.”

Both Bruce and Ferentz have referenced Johnson’s seemingly always serious demeanor, saying that he smiles only on rare occasions.

Senior offensive lineman Kyler Schott said a hunger for the spotlight has fueled Johnson on the practice field and in the meeting room.

“I think he just wants to get better and he wants to do it really fast,” Schott said of Johnson. “He doesn’t want to wait two, three years to be the guy, he wants to be the guy right now. So he’s working his tail off when we’re in here practicing and you love to see that from younger guys.”

Although Bruce and Johnson have been impressive in their first collegiate seasons, Bruce said he’ll never be satisfied.

Each half of the duo has seen a greater role in the offense since the calendar turned to November.

Fifteen of the duo’s 34 receptions have come in the last three games, and it’s no surprise that both players have seen an uptick in production during November. Padilla, who began the season as the backup quarterback, has played the majority of the last three contests. Padilla came in relief of Petras against Northwestern and has started the past two games at home against Minnesota and Illinois.

Bruce and Johnson, like Padilla, began the season on the second-team offense.

During the spring practices before the season began, Bruce and Johnson practiced almost exclusively with the twos. Johnson was slated behind Tracy as a second-team wide receiver on the Week 1 two-deep depth chart and Bruce wasn’t on it. Johnson and Bruce only started practicing with the first team and Petras at the beginning of fall camp.

But those practice reps with Padilla meant chemistry and connection for Johnson and Bruce with the now-starting quarterback.

After the win over Illinois on Nov. 20, Padilla told the media that he, Johnson, and Bruce all “Know what each other is thinking.”

That cohesion and connection was on display between Padilla and Johnson against the Wildcats in Evanston.

On a second down and 10 with 44 seconds remaining in the first quarter, Padilla dropped back, surveyed the field, and heaved it down the right sideline in Johnson’s direction.

His target was well-covered by Northwestern cornerback Jordan Mosely, but at the last moment, Johnson vaulted into the air and caught a nearly perfect back-shoulder pass from Padilla — one that could only be completed with numerous practice reps. It was the definition of letting your playmaker make a play.

Bruce’s turn to make an impressive back-shoulder catch down the sideline came two weeks later at Kinnick Stadium against the Illini.

On the final play of the first quarter, a critical third down and 9, Padilla looked right, faked a throw, quickly looked left and unloaded the ball with an Illini defensive lineman closing in for a sack.

Bruce, like Johnson, was well-covered on the play, but Padilla placed the ball in a perfect spot and Bruce came down with a diving catch to keep the drive alive and move the pigskin into the red zone.

Whether it’s been the sheer athleticism and talent, a willingness to learn every day, the strong connection with the starting quarterback, or a combination of all three, freshman wide receivers Johnson and Bruce are finding their way into the limelight early in their Hawkeye careers and don’t show signs of leaving it any time soon.

“It’s been awesome, man. It’s a dream come true,” Bruce said. “I mean, like, every kid that has [the NCAA football video game] as a kid, they play ‘Road to Glory,’ that’s basically what I’m doing right now.”