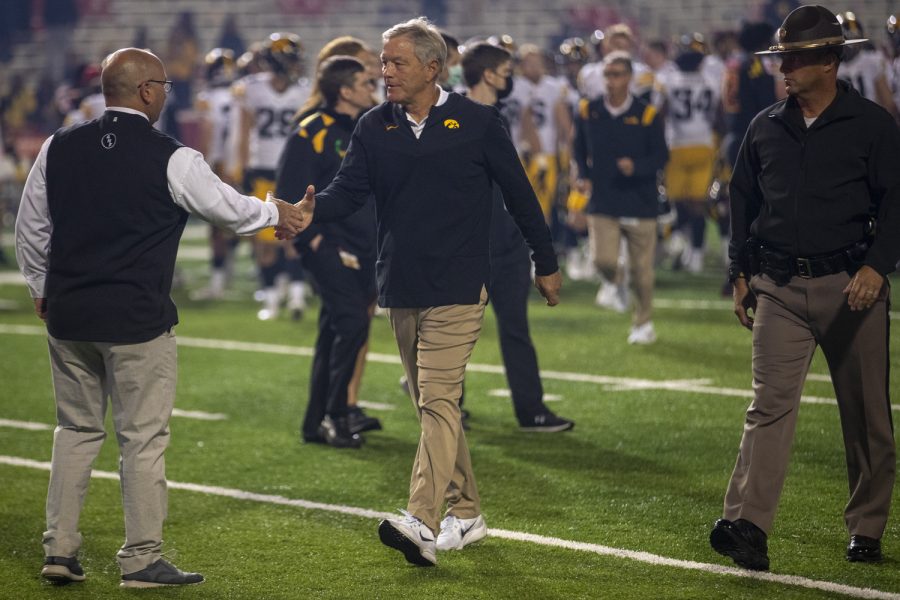 Iowa head coach Kirk Ferentz walks off the field during a football game between Iowa and Maryland at Maryland Stadium on Friday, Oct. 1, 2021. The Hawkeyes defeated the Terrapins 51-14.

Deep down, do I actually believe Iowa football will make the 2021 College Football Playoff? No, not really.

Despite my doubts, I do think there’s still a path the Hawkeyes can take to the College Football Playoff.

First, Iowa will definitely have to win out.

The Hawkeyes will need to beat 3-3 Wisconsin in Madison after their bye week, which will probably be difficult. Then, they’ll need to pick up wins over Northwestern, Minnesota, Illinois, and Nebraska — all of which currently have losing records.

Even if Iowa wins all its games, it’ll need some help from Purdue to get to the Big Ten Championship Game at Lucas Oil Stadium in Indianapolis.

Should Iowa win out in the regular season, pass Purdue in the standings, and then win the Big Ten Championship Game, the Hawkeyes could still make the College Football Playoff.

Iowa would likely face a ranked opponent in the Big Ten Championship Game. So, with a win in Indianapolis, the Hawkeyes would boast four wins over ranked teams in 2021.

But I think it’d be hard for the College Football Playoff Committee to turn a 12-1 Big Ten Champion Iowa team with four wins over ranked teams away — especially considering Iowa’s lone loss in this hypothetical scenario would be to a Purdue team that was ranked in the top 25 after it beat the Hawkeyes.

After Saturday, the Iowa football team’s hopes for the College Football Playoff are a thing of the past.

The Hawkeyes were thoroughly outplayed in every facet of the game by a wide margin.

Iowa was outscored by three possessions. And it could’ve easily been four, had Boilermaker wide receiver TJ Sheffield not fumbled through Iowa’s end zone in the third quarter, giving the Hawkeyes the ball at the Purdue 20-yard line.

Offensively, Iowa was outgained by nearly 200 yards. The Hawkeyes ran 15 fewer plays than Purdue. In the second half, Iowa mustered just 91 yards of offense. The Hawkeyes only gained six yards in the third quarter.

The Hawkeye defense couldn’t get off the field Saturday either, surrendering a 64 percent third-down conversion rate to the Boilermakers.

Iowa also had its worst game of the season in pass coverage Saturday. Purdue quarterback Aidan O’Connell’s 374 yards through the air is the most Iowa has given up this season by nearly 200 yards.

Boilermaker wide receiver David Bell accounted for 240 of Purdue’s passing yards. He racked up 11 catches on the day, averaging nearly 22 yards per reception.

Even if Iowa somehow runs the table from here and wins a Big Ten title, which is very unlikely, the utter spanking it received from an average Purdue team Saturday will likely keep the Hawkeyes out of the College Football Playoff.

Regardless, the blowout loss to the Boilermakers won’t look good on the Hawkeyes’ résumé — that’s for sure.