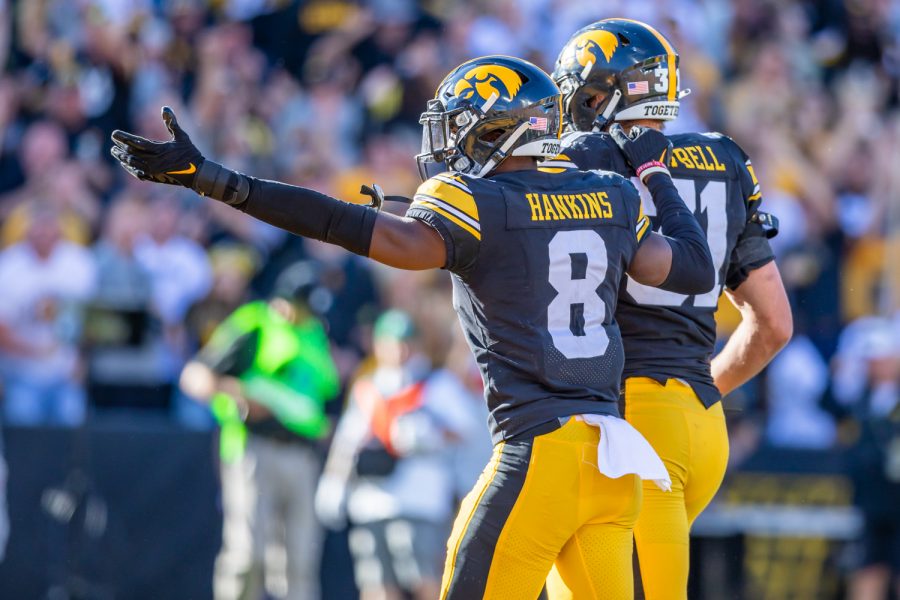 Iowa defensive back Matt Hankins and linebacker Jack Campbell celebrate a turnover during a football game between Iowa and Colorado State at Kinnick Stadium on Saturday, Sept. 25, 2021. The Hawkeyes defeated the Rams 24-14.

Point/Counterpoint | Should college football be played on Fridays?

Watching college football on Saturday is habitual and a bit ritualistic for me. It’s easily the best day of the week to watch a game. Nothing beats kicking back on your couch, watching ESPN’s College GameDay, and then proceeding to consume 12 or more hours of football.

College football is a Saturday sport — there’s no doubt about that. It’s been rightfully played on the last day of the calendar week for decades.

I’m not going to argue that watching college football on Friday is better than watching it on Saturday — that’d be heinous, and I’d be lying if I said I prefer Friday contests to Saturday games.

What I will argue, however, is that Friday games are still fun to watch.

So, really, Fridays — like Tuesdays and Wednesdays — were football-less before the Big Ten started playing games on the calendar week’s penultimate day.

I’d much rather watch a live Big Ten football game on a Friday night than turn on Netflix to start Nickelodeon’s “Avatar: The Last Airbender” for the 12th time.

What’s the downside to football on a Friday? After a long day at work or school, you get to come home and watch a live game. It’s great.

Just because a college football game is played on Friday doesn’t mean it’s bad — it’s just different, and humans are resistant to change.

The matchups don’t always light up college football’s marquee on Friday night. But any college game is better than no college game at all.

I get that it’s mainly a TV thing. I’m sure network executives think their games will get higher ratings on Fridays than they would on Saturdays because there are fewer games to compete against for viewership.

But Friday nights should be reserved for high school games. Part of the fun of a college-football Saturday is watching games unfold nationally and hypothesizing how those contests will affect your favorite teams and their games.

Watching for upsets, keeping track of the conference standings, and hearing about breakout performances all add to the college-football atmosphere on Saturday.

Iowa won’t be a part of that this week.

Instead, they’ll play Maryland at 7 p.m. on Friday. You will wake up on Saturday and say to yourself, “There’s an Iowa game today. Oh wait, no there isn’t.” And you’ll be sad.

Looking at the schedule from a player’s perspective, a Friday night affair throws off the practice schedule for the week. I think it’s fine for the NFL to give its guys a short week of rest ahead of a Thursday night game. NFL players are paid employees, college athletes are not.

If you ask any player, they’ll probably say they don’t care when they play, but I think they’re lying.

While some people might say they enjoy an occasional Friday night college contest, I — for one — am a traditionalist who likes his college football played on Saturdays.