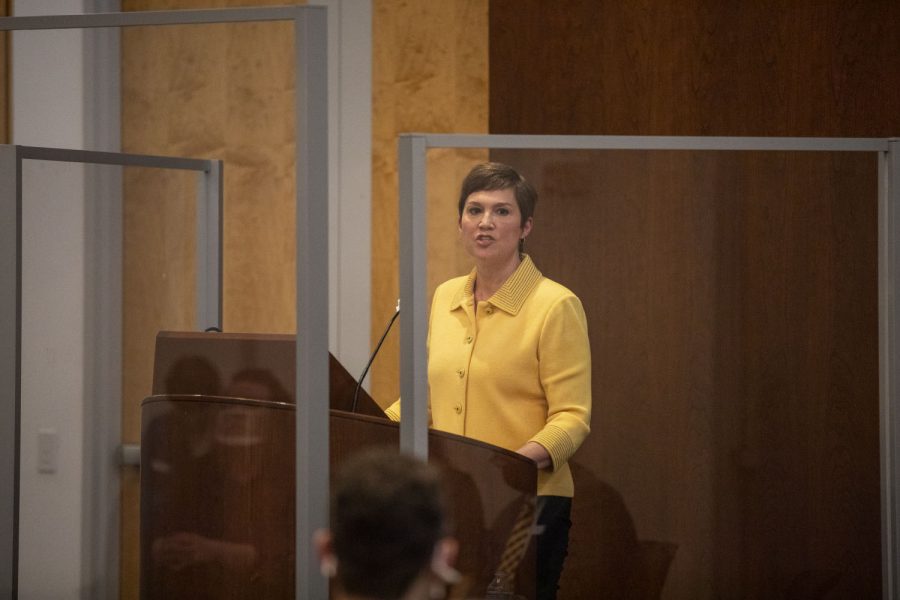 Current Georgia State University Provost and Vice President for Academic Affairs Wendy Hensel plans to focus on student success and hiring diverse faculty and administrators if selected as the next University of Iowa president.

In interviews with The Daily Iowan, faculty and administrators who work with Wendy Hensel described her as transparent and as a leader who acts.

If selected as the next president of the University of Iowa, Hensel would break out of the “administrative bubble,” she told the DI in an interview April 23, and make time in her schedule to meet with students, faculty, and staff on campus.

“It’s really important to provide time and access,” Hensel said. “The president’s time is super busy. Provost’s time is really busy, too, so it’s not so different than what I have now.”

Hensel is one of four finalists named in the search for the next UI president, which began after current President Bruce Harreld announced his retirement in October 2020.

Leading a nationally ranked research institution with roughly 53,000 students, Hensel began her position as provost in October 2019. Before serving in her current position, she served as interim provost, dean of the Georgia State College of Law, and as the first associate dean for research and faculty development.

Hensel is deliberate in the decisions she makes and doesn’t drag out the process, said Wallace, dean of the Andrew Young School of Policy Studies at Georgia State. Hensel creates a process that administrators follow and helps them determine exactly what each decision was made, Wallace said.

Not everyone may agree with her decisions, Wallace said, but those who disagree know how and why the final decision was made.

“She spends a lot of time with decisions, so this deliberate, transparent, informed decision-making process is something I’d imagine, I know she’d bring to [the UI], and it’s such a benefit in decision making,” Wallace said.

“She’s collaborative, and a lot of leaders don’t often say, ‘I don’t know,’ but Wendy will say ‘I don’t know’ when that’s how she feels,” Wallace said. “She’ll come back and say, ‘OK we’ve learned this, now we need to take a little bit of a change.’”

If selected as the next UI president, Hensel told the DI that she would start by talking and listening to the UI community, similar to how she said she makes regular time in her current position to speak with people and faculty about their concerns at Georgia State University.

“When I feel like they’re not reaching out to me, I make sure that I reach out to them so that it’s a two-way street,” she said. “I think that’s how you build trust and create an environment where you can work together to solve some really hard problems.”

Georgia State Dean of the College of Law Leslie Wolf has worked with Hensel since 2007. Wolf said, when Hensel is faced with a problem, she makes an accountability plan and follows through.

For example, after Georgia State conducted a Faculty Job Satisfaction Survey in September 2020, Hensel worked with members of the faculty and administrators to create next step plans.

Georgia State does not provide public access to the job satisfaction report, but in a message to campus summarizing the report in April, Hensel wrote that, since the report, Georgia State held listening sessions and set metrics and goals to improve service, mentoring, appreciation and recognition, faculty recruitment, retention and belongingness, and support for research and creative work.

Wolf said Hensel asked all the colleges to step back and identify what the university could do to respond to improve retention.

“She asked each of the deans to go through a process within their colleges to look at their own data and identify how they were going to respond,” Wolf said.

Hensel said during an April 19 forum at the UI that she will not defund or reallocate funds away from the UI Police Department if she is the president. She called it “troublesome” that Black Lives Matter protesters were tear gassed by law enforcement agencies in Iowa City last summer. She said leaders should address people’s concerns and plan avenues for people to protest peacefully to help avoid situations that end in police confrontations.

“That’s the kind of thing that we need to avoid,” Hensel later told the DI.

Hensel said she supports a holistic approach to UI campus safety. The holistic approach — a safety approach that invests in student health and well-being, centralizes support and resources, uses alternative first responders such as mental health professionals and mediators  — is one of three models created by the UI Reimagining Campus Safety Committee being presented to President Bruce Harreld to change the approach to campus safety, as previously reported by the DI.

In two 12-hour days visiting the Iowa City campus, Hensel said she felt welcomed and experienced the “Iowa nice” friendliness at the UI as an outsider. Hensel said she got to sneak away from her day full of meetings to eat at two Iowa City restaurants.

“I really loved how [campus] intersected with the city,” Hensel said. “It’s in your backyard, very vibrant, very exciting. I saw students, even with the pandemic, out and about.”

The UI’s shared-governance groups met with Hensel during her campus visit on April 19. Hensel said in the interview that they discussed how shared governance should work at the UI.

“It was very insightful for both of us, I think,” Hensel said. “Clearly, we’re thinking about those things in the same way.”

Incoming Vice President of UI Graduate and Professional Student Government Walt Wang didn’t offer individualized feedback but said each of the finalists for the presidency have emphasized the value they placed on shared governance.

“We’ve been very happy to be able to meet with them and talk to them on a more personal level and get to know them more as a person,” Wang said.

Regan Smock, the recently elected Undergraduate Student Government president, said she considers Hensel as an experienced candidate for the position. Smock said Hensel talked about how USG and the UI President’s Office will help each other to communicate to students.

“Before making decisions she talked about bringing those issues to students … and then hopefully meeting with city government very regularly,” Smock said. “[Hensel] said, it can be really easy to forget about the internal constituencies when you’re trying to serve the Board of Regents.”

Hensel hired Georgia State Associate Provost for Faculty Affairs Nicolle Parsons-Pollard in July of last year and has worked with her on the university’s COVID-19 response planning and responding to social unrest on campus related to racial injustice.

Parsons-Pollard said the Task Force for Racial Equality came up with a list of initiatives, which work well with the initiatives they already had in place to address diversity, equity, and inclusion concerns.

Hensel started the task force at Georgia State during the summer after protests started in Atlanta, following the murder of George Floyd in Minneapolis. She worked with stakeholders on campus, including the chief of campus police, to find a way to more effectively police campus.

The task force created an action plan for Georgia State to follow, broken down into goals for the fall and spring semesters, which focus on changing university policing, hiring, promotion, and retention practices, and ensuring that conversations about diversity, equity, and inclusion continued on campus.

The committee was charged with identifying ways to recruit diverse faculty and addressing problems faculty reported in a separate job satisfaction survey conducted before the protests this summer. Objectives related to the university senate focus on reviewing the use of student instruction responses and checking them for bias and creating social justice programming and pathways for transcripts.

Parsons-Pollard said, although Hensel has been at Georgia State for more than 20 years, she continues to look to the future for how the university can change and improve.

“Oftentimes, when we think about a person who’s been somewhere that length of time you think about someone who is sort of set in their ways about the way the institution should run,” Parsons-Pollard said. “She’s exactly the opposite, you would think that she’s been here for a shorter period of time, because she understands the process and the change that needs to happen in order for us to do our jobs well in higher ed, and that means we can’t just do what we always do.”

Hensel said she lived in the Midwest during her undergraduate education at Michigan State University. She said she applied to the presidential position because she has an affection for the Midwest and Big Ten institutions.

“[The UI] seemed like it was a really great opportunity, and maybe a really good fit,” Hensel said.

Loren Glass, a UI English department chair and member of the faculty senate, said he was impressed by Hensel overall.

Glass said Hensel seemed to have strong accountability and personal integrity, and he agreed with her about being transparent and building trust between the different constituencies on campus and administrators.

He said Hensel seemed more data driven than the other candidates. Using data in making faculty hires can be useful, he said, but more needs to go into the hiring and recruitment process beyond the data.

Glass also said he understood where Hensel was coming from in talking about the data behind graduation and retention and reducing the time it takes to complete a degree. He said the focus on maximizing tuition comes from the financial focus of the university.

“I think the important thing is that they get the degree and then have a good life and get a good job as a result of the degree,” Glass said. “I’m a little less concerned about the time to degree, but I do understand.”

Hensel hopes to use data on the time it takes to complete a degree to improve student success, something she sees as an immediate challenge if she’s selected as the next president. She wants to make sure the UI remains a compelling place that’s a destination for students.

“We absolutely should not admit a student without committing to seeing them through graduation,” Hensel said. “It’s just a failure of the system — it’s tragic for the individual.”