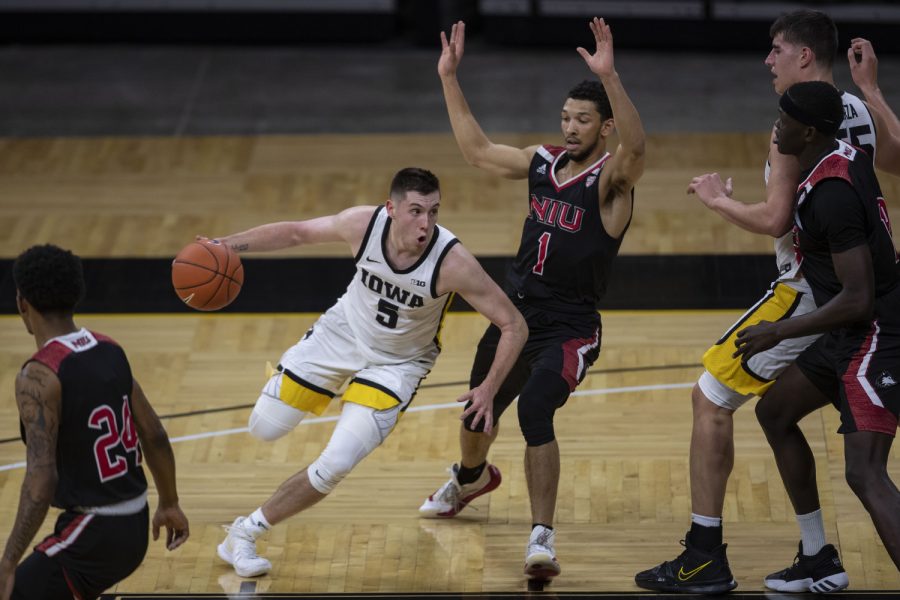 Iowa guard CJ Fredrick dribbles the ball during a basketball game against Northern Illinois on Sunday, Dec. 13, 2020 at Carver Hawkeye Arena. The Hawkeyes defeated the Huskies, 106-53.

This one could go either way.

Gonzaga vs. Iowa. No. 1 vs. No. 3. Probably the two best offenses in men’s college basketball.

The Zags haven’t been on the court much this season. The program canceled five games and put its season on pause after positive COVID-19 tests from the team. But when Gonzaga has been on the floor, the team has looked the part. Gonzaga is 3-0 this season, with victories over Kansas, Auburn, and West Virginia.

Like Iowa, Gonzaga is versatile, experienced, and capable of putting up points on any team in the nation.

Gonzaga has tremendous front court depth, including senior Corey Kispert, a potential All-American, and Drew Timme, the Zags’ 6-foot-10 leading scorer. In the backcourt, Jalen Suggs runs the point as one of the best freshmen in the country, and 2020 West Coast Conference Tournament Most Outstanding Player Joel Ayayi is also a threat.

Look, there is no easy pick in this game. Iowa also has incredible depth, and the best player in the country in Luka Garza. There’s no question these are, deservingly, two of the best teams in the nation, maybe even the best two teams.

I think Gonzaga is better equipped to defend Iowa than vice versa. We know Iowa can score a lot. But can the Hawkeyes stop an offense that is just as good, maybe even slightly better, than theirs? I’m not sure.

So, I’m going with the Zags.

This Saturday’s Iowa-Gonzaga game at the Sanford Pentagon in Sioux Falls, South Dakota, may end up being the game of the year in college basketball. According to the Associated Press Poll, Gonzaga is the nation’s best team, while Iowa is ranked third.

With an upset win, Iowa could be vaulted to No. 1 in the country. However, the task that lies ahead for the Hawkeyes is a tall one. Gonzaga is 3-0 on the year with wins over Kansas, Auburn, and West Virginia.

The Bulldogs’ résumé is doubtlessly impressive, but that doesn’t mean they will win the game. Gonzaga comes into its matchup with Iowa fresh off a 14-day pause of basketball activities. In fact, prior to Monday, the Bulldogs hadn’t practiced at all. In total, Gonzaga will have just four days of practice after 14 days off to prepare for and get in shape to play the Hawkeyes.

While Gonzaga has been paused, Iowa has been playing. On the season, Iowa is 6-0, boasting a 32-point average margin of victory. The Hawkeyes even have a 13-point win over No. 22 North Carolina to their names.

So far, Iowa has done what is expected of a top-five team and blown past each of their first six opponents – winning every game by double figures.

Garza isn’t the only weapon Iowa has either. The Hawkeyes’ roster is littered with scorers like guards Joe Wieskamp, Jordan Bohannon, and C.J. Fredrick. Iowa’s depth goes beyond the starting lineup too, with scoring threats like guard Joe Toussaint and forwards Jack Nunge and Patrick McCaffery coming off the bench.

I expect Iowa’s ability to score the basketball and depth off the bench to put them over the top on Saturday. Expect the Hawkeyes to win a close battle and stake their claim for No. 1 in the nation when the dust settles.