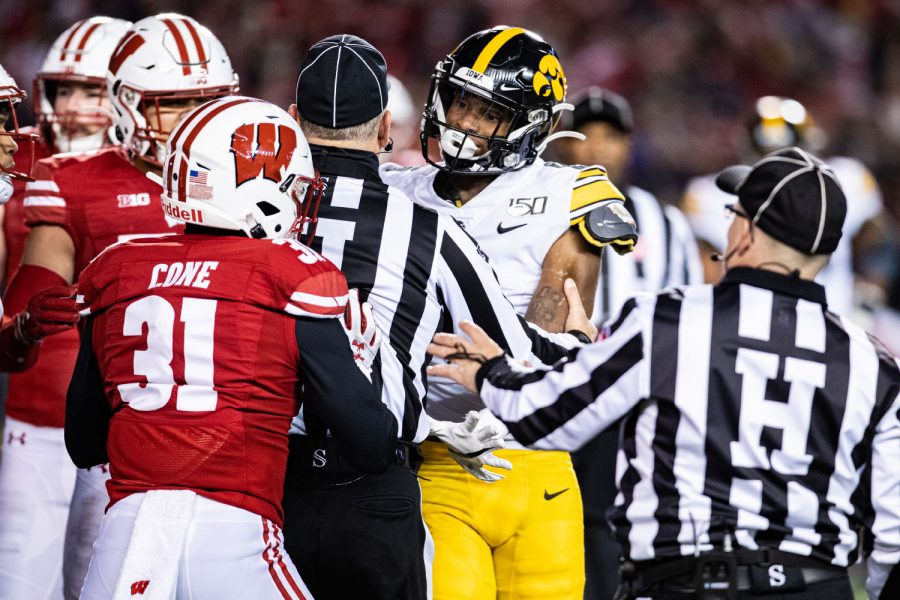 Officials seperate Iowa’s Ihmir Smith-Marsette and Wisconsin’s Madison Cone during a football game between Iowa and Wisconsin at Camp Randall Stadium in Madison on Saturday, November 9, 2019. The Badgers defeated the Hawkeyes, 24-22.

Point/Counterpoint: Who will win the Big Ten West?

An unprecedented season lies ahead for the Big Ten Conference. Two DI staffers debate who will emerge triumphant in the Big Ten West.

This is a safe prediction, but I think it will ultimately be the correct one.

Wisconsin has to overcome the loss of star running back Jonathan Taylor to the NFL, while also replacing three starters on the offensive line. But the Badgers have backs from last year’s team returning this season, as well as a potential breakout player in freshman Jalen Berger.

And filling holes on the offensive line shouldn’t be a huge deal. After all, it is Wisconsin.

The biggest reason I’m confident in picking the Badgers is because of what I saw last season from quarterback Jack Coan. In his first season as Wisconsin’s full-time starter, Coan threw for 18 touchdowns compared to only five picks.

Going into his senior season, the Sayville, New York, native could be the best Badger under center since Russell Wilson.

Losing Quintez Cephus, the team’s leading receiver from last season, is going to hurt, but there are still plenty of targets on offense, including a potential All-Big Ten tight end in Jake Ferguson.

Oh, and Wisconsin’s defense is going to be good again this season — really good.

Despite losing two of its star linebackers from a year ago, the squad is set to return 18 of its top 20 tacklers. There are going to be versatile pass rushers all over the field and a promising young secondary helping them out.

Wisconsin plays Minnesota at home this season, leaving its two toughest games at Michigan and at Iowa. I think a 7-1 regular season is very realistic for the Badgers, and that will be enough to be the West’s representative in the Big Ten Championship.

A typical Kirk Ferentz-coached Iowa team would likely not fare well in the conference’s unique upcoming football season. During Ferentz’s tenure, the Hawkeyes have traditionally made up for a lack of raw talent via steadfast commitment to fundamental football by establishing the run and playing great defense. Superb game preparation has also served Iowa well in the past.

This season, with only a month to prepare for an eight-game race to the finish line, the Hawkeyes may not be able to call upon fundamentals and preparation as they normally would. Luckily, this Iowa team is different from previous incarnations.

The 2020 Hawkeyes have more than enough talent to make up for a lack of time to prepare. They have an overabundance of raw talent, power, and speed on offense.

Ihmir Smith-Marsette and Brandon Smith may prove to be the best receiving duo in the Big Ten this season. Tyler Goodson will also provide a great deal of explosiveness out of the backfield in his second season in the Black and Gold.

In addition to Iowa’s main repertoire of weapons on offense are some supplementary players that could prove to be breakout Hawkeyes in 2020. TE Sam LaPorta and WRs Tyrone Tracy and Nico Ragaini could all give the Hawkeyes a huge boost.

The only question mark on offense for the Hawkeyes is new starting quarterback Spencer Petras. But with the weapons surrounding him, it is difficult to foresee a scenario in which the new signal caller struggles.

Iowa’s two main competitors in the Big Ten are Minnesota and Wisconsin. The latter lost the engine to its offense – running back Johnathan Taylor – to the NFL Draft, and the former may not have access to the services of star wideout Rashod Bateman due to NCAA eligibility rules either.