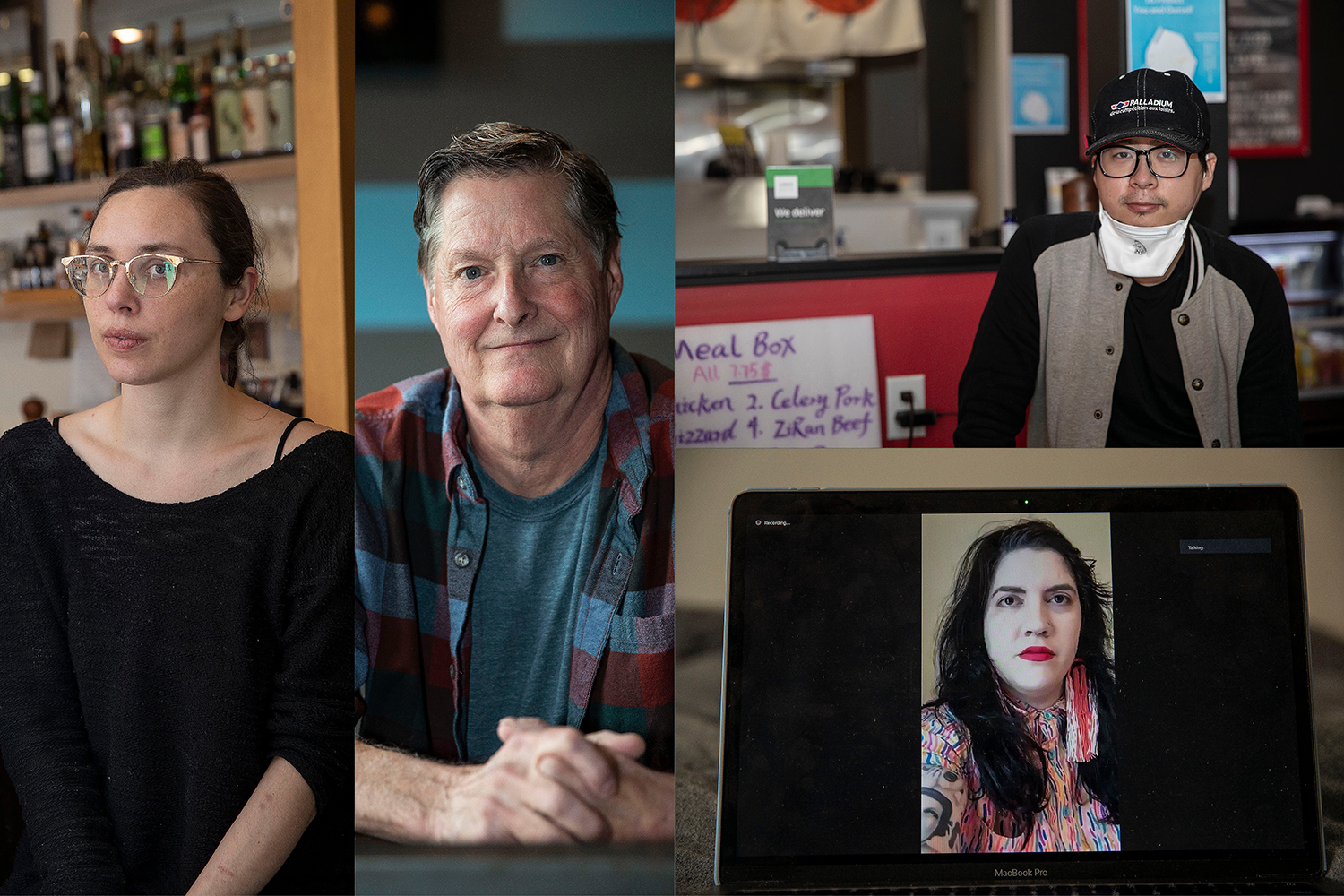 For businesses feeling the effects of the COVID-19 pandemic, Small Business Administration loans and grants can be the difference between surviving and closing the doors for good. But the path to funding isn’t the smoothest.

Honeybee Hair Parlor owner JoAnn Larpenter-Sinclair said her stylists have been lucky to receive unemployment benefits, but she’s worried about potentially jeopardizing that with the $27,500 Small Business Administration loan that is currently sitting in her bank account.

Hair stylists are paid in a variety of ways, depending on the salon they work at. Some have a salary, while others work independently within the salon. The three stylists at the Honeybee Hair Parlor work on commission. This means that if they’re not in the salon, they don’t get paid.

“We’re not used to taking a lot of sick days because when we don’t work, we don’t get paid,” she said. “So none of us are used to this much time off.”

The hair parlor and other local businesses are seeking help from the federal government as they try to survive with severely reduced or no revenue coming in, but some are struggling with the application process or hitting snags as they wait to receive the funds.

The U.S. Small Business Administration has many different programs available to give small businesses relief, both traditional and those that are specific to helping during the COVID-19 pandemic.

One such relief loan, the Paycheck Protection Program, has experienced a few bumps in the road, from the first $349 million of the fund drying up in 13 days, to technical issues, to doubts about if the money is going to the businesses that need it the most.  The administration opened applications again April 27 awash with $310 billion to give in loans.

The agency’s website says it will forgive loans if all workers stay on the payroll for eight weeks and the money is used for payroll, rent, mortgage interest, or utilities.

Ying Sa, the CEO of accounting firm Community CPA, said there are four steps to ensure that the loan is forgiven.

When the 56 days are almost up, collect documentation showing that the money has been spent. Finally, the business owner should go to the bank and apply for forgiveness.

Larpenter-Sinclair attempted to apply for the program’s loan during the first round, but ran into roadblocks when trying to submit the correct documentation.

She said her bank sent her to a different online business because it couldn’t process the loan for her. This business kept telling her she didn’t have the correct documentation, and she was ultimately rejected.

“You’re just kind of going through it blind,” she said of the loan-application process.

The second time she applied was much easier, because she had learned that she could use the processing company that does her transactions to file all the needed information. She received the funding quickly after she was approved. This money will go toward payroll and rent, she said.

Oasis Falafel owner Ofer Sivan applied for the PPP loan three separate times before being approved, seeing the same issues as Larpenter-Sinclair with lenders not being approved to work on the loan. The restaurant has been closed since early March, only making products to sell at grocery stores.

Sivan declined to provide the total funds he received, but he said he is still figuring out where to allocate the money. The rules surrounding how to make sure the loan will be forgiven are murky, he said, and it seems like no one really understands them.

“It’s been pretty frustrating, but it’s not surprising, given that it’s a government program,” he said.

In order to qualify for the PPP loan, businesses must prove that they have suffered economic loss due to the novel coronavirus. Then they should connect with their bank to start the application process. If this bank isn’t a qualified lender, then they cannot process the loan.

The loan came out in a very basic form, Ying Sa said, so there wasn’t much guidance from the government. This creates confusion for small businesses trying to figure out how to stay afloat during the pandemic.

“It put a lot of pressure on firms like our firm because all the small businesses are seeking understanding,” Sa said. “… Very often, we don’t have the answer.”

JiangHu Asian Street Food has remained open for carryout and delivery during the pandemic, and owner Yi Zheng said he applied for both the PPP and Economic Injury Disaster Loan, which gives a loan advance of up to $10,000. While Zheng said the process to apply for both loans was easy, he didn’t receive the $5,000 until a month later.

Despite lower demand, the restaurant still has to buy and store fresh food for the customers they have, Zheng said, so there is the possibility of money getting thrown out as food that wasn’t used, which can add up.

“The loan, it did help; it covered a lot,” Zheng said. “Like, I’m very grateful for this. I know a lot of people haven’t received [a loan] yet, so I’m very grateful, but it’s not good enough to get through this.”

Businesses are also looking closer to home for help. Jessica Meyer, owner of clothing store The Shop, located at 4 S Dubuque St., said the business applied for the PPP loan but received no response from her bank and the SBA on getting funds.

Meyer said she has taken advantage of the resources the Iowa City Downtown District is providing through webinars and its website, icareatogether.com.

“We appreciate all they’re doing to help us,” Meyer said.

“We’re just trying to work to understand the needs and impacts and then trying to find a way to continue to engage with the larger community about ways you can support some of these area businesses,” Bird said.

Bird said she believes there is more overall understanding of the Small Business Administration opportunities now as the agency clarifies the rules and businesses work with banks and commercial lenders.

As of now, Johnson County will have the opportunity to open certain businesses in a limited capacity on May 15. Iowa Gov. Kim Reynolds eased restrictions on 77 counties, not including Johnson, starting May 1, allowing restaurants and other businesses to open at 50 percent capacity, though many have opted to remain shuttered out of concern for worker and customer safety.

DP Dough owner Jon Sewell said despite the $10,000 bridge loan he received through the Economic Injury Disaster Loan, it won’t be enough to get him through the summer, a low period in terms of revenue for the restaurant. He said he is moving forward in the process to get a PPP loan, but hasn’t yet received funds.

As other restaurants begin to receive funds and reopen their doors, Sewell said he wasn’t sure he would be able to compete with them.

“If I get no relief from any of these disaster loans, I won’t last that long,” Sewell said.

Sivan said Oasis is set to start opening again in two weeks, with the business as open as it can be within four weeks, unless officials recommend that businesses stay closed.

“I don’t know how long we could operate at a loss, so we’ll have to open up and see how it goes and how the math works out, “ Sivan said. “It’s hard to know.”