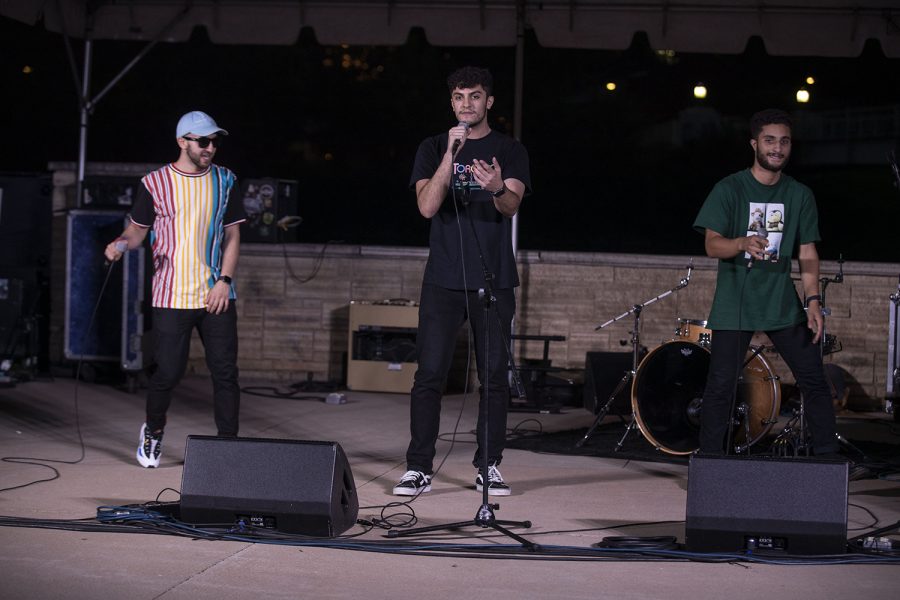 3 in the AM performs during Battle of the Bands behind the IMU on Sept. 4, 2019. Five bands competed for various cash prizes.

3 in the AM wrapped the night up with an upbeat musical mix. It was on the third song, “That’s Decent,” when the group really came alive with a nice bass and fun bars.

The trio consists of Yassine Filali, Mohammed Shaban, and SE!F, friends from high school who have been creating beats and rhymes since their senior year.

“The first song we ever made was for [Filali’s] birthday. Like he got like a microphone for his birthday. And I was like, ‘let’s use it’,” Shaban said. “And we made a song. This was like senior year of high school.”

The trio created a music video for their song “That’s Decent,” and the positive feedback from that encouraged them to continue creating music. The hip hop group creates all their music in Logic X Pro on their laptops.

At Battle of the Bands, the group performed a variety of songs, including one they had recorded just 12 hours prior.

“The thing is we usually come to whatever we’re going, wherever we meet up withnothing in mind,” Shaban said. “And then within an hour, we’ll have a beat made and then a theme in mind. And then in another hour we’ll record everything. We can get songs up in like two hours.”

As for the future of the band, 3 in the AM is looking to move out of Iowa and potentially to bigger stages in Chicago.