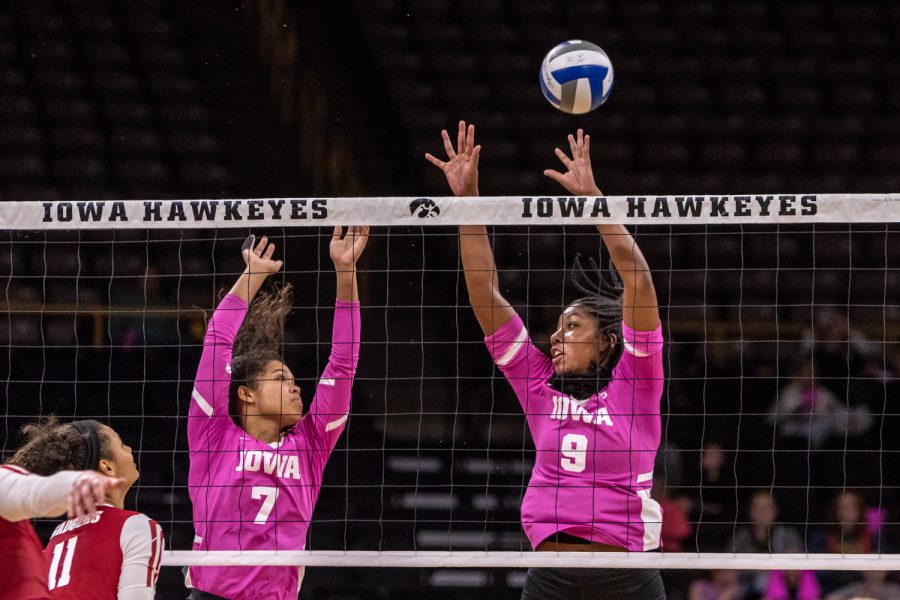 Iowa’s Brie Orr and Amiya Jones try to block the ball during a volleyball match against Wisconsin on Saturday, Oct. 6, 2018. The Hawkeyes defeated the number six ranked Badgers 3-2.

Point/Counterpoint: Will volleyball make the NCAA Tournament after beating No. 6 Wisconsin?

Iowa has had the NCAA Tournament in mind for a while; could this could be the year that volleyball finally makes the cut?

Since Bond Shymansky was named head coach of Iowa volleyball in 2014, the Hawkeyes have had one goal in mind: an NCAA Tournament berth.

Iowa volleyball clicked on all cylinders against No. 6 Wisconsin on Oct. 6 in Carver-Hawkeye. Many conclusions can be drawn from this monster win, but one stands out: This is, finally, the year for Hawkeye volleyball.

A lot of streaks are being broken this year for the Hawkeyes, streaks that indicate a tournament run is in the cards for the squad.

Indeed, it has been a lengthy 24 years since the last NCAA Tournament berth for the volleyball program. But it seemingly is the year of broken streaks, so why not this one?

If the Hawkeyes make it happen, it will be because of its biggest stars. In the win against the Badgers, hitters Taylor Louis and Cali Hoye posted a monstrous 54 combined kills. Libero Molly Kelly is among the very top in the Big Ten in digs per set, indicating an improving defense.

Iowa fans are starting to notice. The Oct. 6 match against the Badgers was the 11th-largest crowd in the history of Hawkeye volleyball.

It is pretty undeniable that something special is happening on the Iowa volleyball team. The Hawkeyes have demonstrated steady improvement since Shymansky was named head coach, and this milestone of reaching the NCAA Tournament is within the program’s grasp.

This isn’t going to be an easy case to make, but I’ll try my best.

Sure, the Iowa volleyball team can be on top of its game at home against a No. 6 team, but if it really is that good, then why isn’t it good all the time?

Iowa doesn’t stand a chance against any team in the NCAA Tournament. Sure, the Hawkeyes beat Wisconsin and took one set from Nebraska, the reigning national champions, but in the sets they lost to those two teams, they put up embarrassing hitting percentages.

There’s still a lot of season left to be played in the NCAA’s toughest volleyball conference. Iowa has to play Nebraska and Wisconsin again, Penn State, Minnesota, and Purdue (twice). Four out of five of those top-25 teams come in the top 10. Yikes.

Not to even mention the eight matchups they have against unranked teams. They have to win all of those — something that hasn’t been a problem thus far — to make a strong case.

The Hawkeyes have to play top-caliber volleyball in every single match they play from here on out. A couple losses against top teams isn’t going to hurt, that’s natural selection, but they have to be hard-fought losses, and the Hawkeyes might not have it in them.

Again, this is a hard position to battle, and in the end the Hawkeyes’ victory over Wisconsin may well be the tipping point that finally awards them an NCAA tourney spot. In past years, the Hawkeyes have been on the brink but have never secured that big win. Now, they have, with plenty of the season to still prove their worth.

If you haven’t paid attention to Iowa volleyball, now’s the time to start.