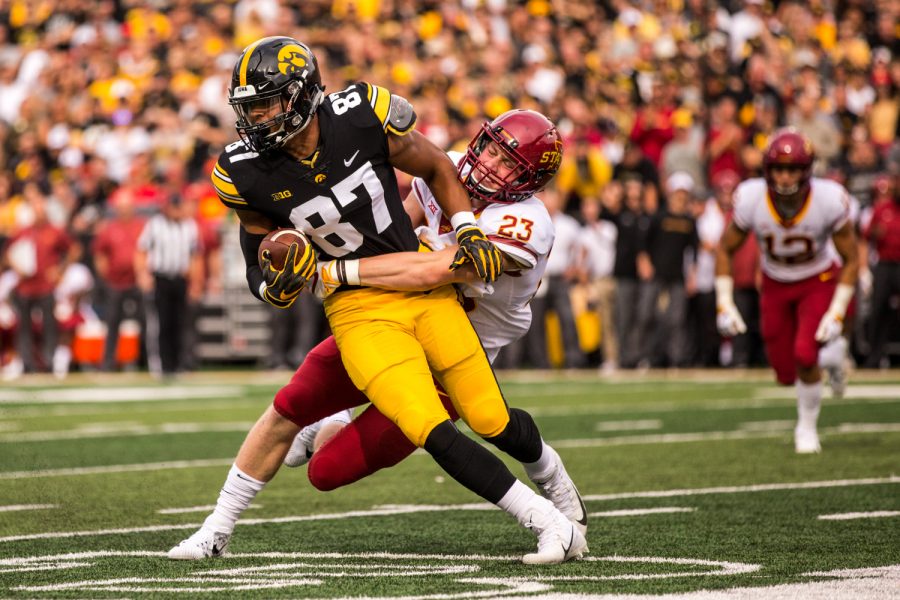 Iowa Tight End Noah Fant runs after a catch during Iowa's game against Iowa State at Kinnick Stadium on Saturday, Sept. 8, 2018. The Hawkeyes defeated the Cyclones 13-3.

Noah Fant is emerging as one of the best tight-ends in the nation by disrupting defenses.

Too fast for linebackers, too big for defensive backs, Noah Fant is a defensive coordinator’s worst nightmare.

For opposing defenses, a lack of sleep comes from trying to stop Fant from running over numerous positions.

“If you get a linebacker out there, it’s a lot of fun,” Fant said last season.

Since beginning his career as only one of 10 true freshmen to see action in 2016, Fant’s role in the Hawkeye offense has caught the eye of NFL personnel, leaving scouts around the league drooling at his potential.

In 2017, he quickly blossomed into quarterback Nate Stanley’s favorite target, catching 2 touchdown passes in the first game. He finished his second season in the Black and Gold with 30 receptions, 494 yards, and an NCAA-leading — and Iowa tight-end record — 11 touchdowns.

“I think it’s huge, not only his ability to catch the ball, but the way that defenses have to game plan against him,” Stanley said. “It really opens up a lot of other people, too, to make plays.”

NFL.com analysts and former scouts Daniel Jeremiah and Bucky Brooks each compiled a list of the top-25 prospects going into the 2018 college-football season, and those lists were then averaged into one.

Fant ended up at No. 9 in the official listing, but Brooks listed him originally at No. 19 and Jeremiah had him at No. 6.

“The best matchup in the NFL right now is when you get a tight end on a linebacker. It’s the most advantageous,” Jeremiah told The Daily Iowan. “Even with the safety, you get guys who can be a little more physical than a safety, you have to be a little more athletic than a linebacker. Everybody is looking and trying to find that mismatched guy, and he is that total mismatched player.”

A focus for Fant has been not only making himself better but also putting into consideration how he can make the team better as a whole. That starts with how he matches up against defenses.

The best matchup in the NFL right now is when you get a tight end on a linebacker. It’s the most advantageous.”

Defensive coordinators have to pay special attention to covering Fant at numerous positions in preparations for a game.

“Anytime a team has to work on specific stuff for you when you only have about two days to install the game plan, so anytime they have to work extra on wrinkles that you can provide as an offense and the mismatches you create, the more chances you’re going to have to make plays on the field,” Dallas Clark, former Iowa and NFL tight end told The Daily Iowan.

Offensive coordinator Brian Ferentz has plenty of options when it comes to lining Fant up with the offense, putting stock into his ability to generate mismatches.

“We like to change the personnel, but when you look at a guy like Noah Fant, he really lives in that hybrid world anyway, so sometimes we have two tight ends on the field, but we just as easily could play with three receivers on the field and do the same kind of thing,” Ferentz said last season.

Fant is the only tight end on the NFL.com top-25 prospects list.

“We’ll see what other tight ends emerge, but I have a hard time believing anyone’s going to surpass him as the top tight end right now,” Jeremiah said.

Early on in Jeremiah’s process, when he asked teams around the NFL about tight ends, Fant’s name was one that came up time and time again.

By watching his film, those on the outside can see why.

“The thing that jumps out to you is that he’s just a unique athlete — he’s so explosive, he explodes, he tracks the ball naturally,” Jeremiah said. “He has the ability to go vertical down the field, go attack the football up in the air, and really, it’s the combination of his explosiveness and just how smooth, he’s just silky smooth for a big dude.”

Fant could ultimately be better than O.J. Howard and Eric Ebron, two recent tight ends who were drafted high in the first round, Jeremiah said.

“It’s hard to predict when guys are going to get picked, because you don’t know who’s picking where and what they need, and that can be a factor,” Jeremiah said. “But no question he’s a top-tier talent, and if somebody’s looking for a game-changer and a mismatched player at the tight-end position, [they] better not wait.”

Tight ends in the Draft

Fant’s 2017 yards-per-catch average is higher than three of four tight ends’ best seasons picked at No. 6 or higher in history, and he leads those four in touchdowns.

In the 2018 NFL Draft, 14 tight ends were picked with the majority going in the fourth round or later. Of those 14, only four had 2017 averages within a point of Fant. The average number of touchdowns scored for the group was 4.3, with a high coming in at 9.

Despite Fant’s receptions and total yards not squaring up to some of those drafted, production isn’t the only thing that matters, because sometimes, it doesn’t translate from college football to the NFL.

Fant’s build — 6-5, 241 pounds — and speed make him a weapon that also has developed production in the offense. 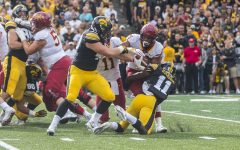 “You start off by looking at him and just seeing him on the field, he’s just a great looking kid and just his size and his speed and his strength,” Clark said. “All of those, you’d be happy with one of the three for the tight end but having all three like he does is what makes him stand out and makes him in a great place for the team.”

From Fant’s skills on the field to the way he is built, it’s clear to opposing defenses and Iowa’s offense that he can and will succeed in many facets.

“When you combine the production with his physical skillset, that’s what makes it special,” Jeremiah said. “He’s not just a height, weight, speed project that you’re hoping is going to develop into a productive pass catcher, and he’s not just a productive pass catcher that you have to sacrifice some of the athletic ability. He really is a guy where you can have your cake and eat it too.”

Becoming one of the best — if not the best — tight ends in the nation comes from a multitude of things, and Iowa has a strong track record for developing that position for the next level.

He really is a guy where you can have your cake and eat it too.”

Most influential for Fant has been George Kittle, who was drafted No. 146 in the 2017 draft to the San Francisco 49ers. Kittle helped to show Fant the ropes during the latter’s first year with the Hawkeyes.

“Just looking back in history and seeing like, there are so many different tight ends that we’ve had that have been good tight ends and used a lot, that was definitely something that meant a lot to me, and I knew I had to hopefully be that one day,” Fant said. “That’s always a goal.”

Clark was drafted in the first round of the 2003 Draft, at No. 24 following his junior season. In his last season with the Hawkeyes, he had 43 catches for 742 yards, a 17.3 yards-per-catch average, and 4 touchdowns.

So far in 2018, Fant has 7 receptions for 31 yards, scoring 1 touchdown against Northern Illinois.

With with two years – or possibly just the remainder of this season – left in Fant’s collegiate career, there’s more that can be improved on to complete the package.

“Tight ends … can really help take their game to another level when they start widening their blinders, and really understand the play, and really understand from the quarterback’s perspective what we’re trying to do on this play,” Clark said. “The more you can create that, the more he can play fast, because the faster you can play the more big plays you’re going to be able to create.”

A big part of his development has been the way Ferentz coaches the offense.

Sometimes, that includes holding nothing back for the sake of turning players into the best they can be and almost nitpicking everything Fant does.