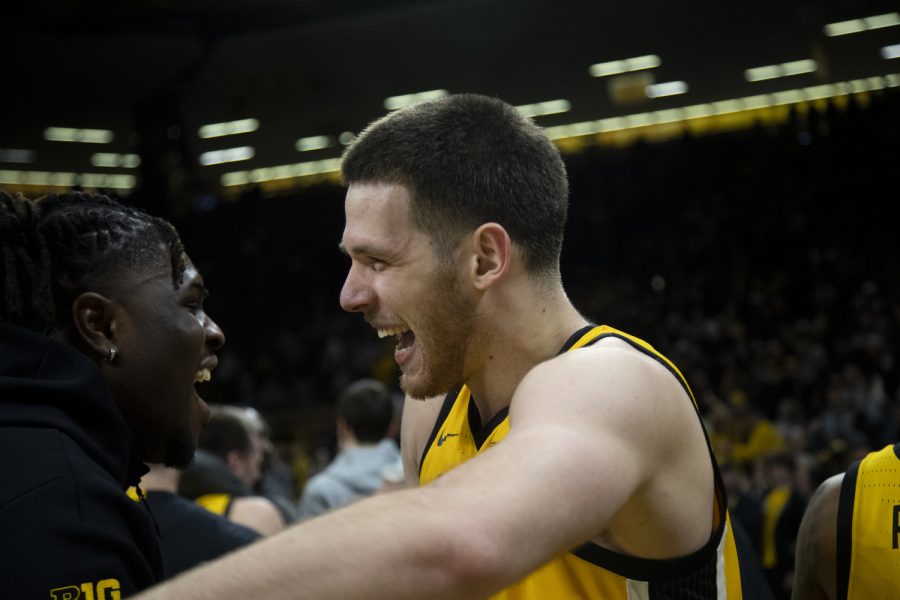 Iowa forward Filip Rebraca embraces a teammate after winning a men’s basketball game between Iowa and Indiana at Carver-Hawkeye Arena in Iowa City on Thursday, Jan. 05, 2023. The Hawkeyes defeated the Hoosiers, 91-89.

Assistant Sports Editor Chris Werner argues that the Hawkeyes will make the 68-team field, while Sports Reporter Grant Hall doesn’t think they have what it takes.

If Iowa men’s basketball head coach Fran McCaffery hadn’t told the media that his son and Iowa forward Patrick McCaffery was “doing a lot better” at a press conference on Jan. 19, I would have a lot more trouble writing this.

But because he did, I believe the Hawkeyes will earn entry into their fourth straight NCAA tournament when March rolls around.

A lot of that confidence comes from the fact that Iowa has won four of its last five games, and who the Hawkeyes have done that with — or without.

All of the Hawkeyes’ wins during that stretch came against teams with good big men, and Iowa has had to match up against those players without both 6-foot-9 Patrick McCaffery and 6-foot-10 Josh Ogundele. Ogundele was injured in practice after the Penn State game on Jan. 1, and Patrick McCaffery took a leave from the team on Jan. 3.

On the heels of three straight losses, without two important interior players, it would’ve been easy for the Hawkeyes’ holiday-season struggles to continue.

But Iowa has since turned it around. On the backs of forward Kris Murray and center Filip Rebraca, with help from a supporting cast of experienced wing players and guards who know where the ball should go, the Hawkeyes have has pulled themselves from the bottom of the Big Ten to the top half of the league’s standings.

I’m not saying that I think Iowa is going to run the table for the rest of the season, I’m just saying the Hawkeyes’ winning streak has proven that they are a resilient bunch that knows how to get the ball to their best players.

And the Hawkeyes do have size, it’s just in the form of a lot of length, not necessarily a 7-footer in the middle.

When Patrick McCaffery comes back, which Fran McCaffery says will be sooner rather  than later, Iowa will have five players 6-foot-7 or taller in its regular rotation of nine.

I still think Purdue’s 7-foot-4 Zach Edey will have a field day when Iowa faces the No. 3 Boilermakers on Feb. 9, but Iowa will receive an invitation to the dance regardless. Who even cares about that stupid Eastern Illinois game? Not me.

The Iowa Hawkeyes will not make the NCAA tournament this March.

Although current projections anticipate the Hawkeyes earning a 7-seed in the Big Dance, I’m predicting a small dip in production on the tail end of an Iowa four-game win streak.

Despite four straight Big Ten wins after an 0-3 start to the conference slate, Iowa may not be able to overcome some of its abysmal losses suffered during the end of December and into the new year. The Hawkeyes dropped a “buy game” to a 7-13 Eastern Illinois squad at home as 30-point favorites, as well as a pair of Ls to Nebraska and Penn State, which are both sub-.500 in the conference.

Perhaps most significant is the loss of redshirt junior Patrick McCaffery. His length and versatility in the frontcourt have been missed as of late, and although his leave of absence is not expected to extend into the postseason, Filip Rebraca won’t be able to hold down the fort inside alone.

Young big man Riley Mulvey showed promise in an overtime win over Michigan, but he will struggle in two-big sets as opposing teams throw bigger, stronger opponents at him.

Iowa’s guard play is a question mark as well. Although both Tony Perkins and Payton Sandfort have started to heat up, their inconsistencies this season cannot be ignored.

Over the course of the next month-plus, the Hawkeyes will play 13 games against their Big Ten brethren before the conference tournament. It’s not implausible that Iowa could drop six or seven of those games.

A talented Ohio State program, which stands 11-8 after starting the season 10-3, showed up for a losing streak-snapping 15-point victory over the Hawkeyes on Saturday, and the two teams will face off again on Feb. 16. No. 3 Purdue and No. 23 Rutgers are on the slate, too. Nebraska, which handed the Hawkeyes a 16-point loss earlier in the season, could sweep the season series, and always-tough Wisconsin and Indiana host the Hawkeyes within a week of one another toward the end of February.

Even if the Hawkeyes manage to split the season series with Ohio State and Nebraska, every game will be a dogfight, and without defensive help inside, there’s a good chance Iowa will lose big games thanks to contributions from opponents’ big men. Purdue’s Zach Edey, Ohio State’s Zed Key, Indiana’s Trayce Jackson-Davis, and Wisconsin’s Steven Crowl all present significant interior threats that usually would have been addressed by Patrick McCaffery when Rebraca requires a breather.

Therefore, I think the Hawkeyes will lose six of the next 13, drop to 11-9 in the conference, and miss the NCAA tournament. They’ll be a high seed in the NIT.