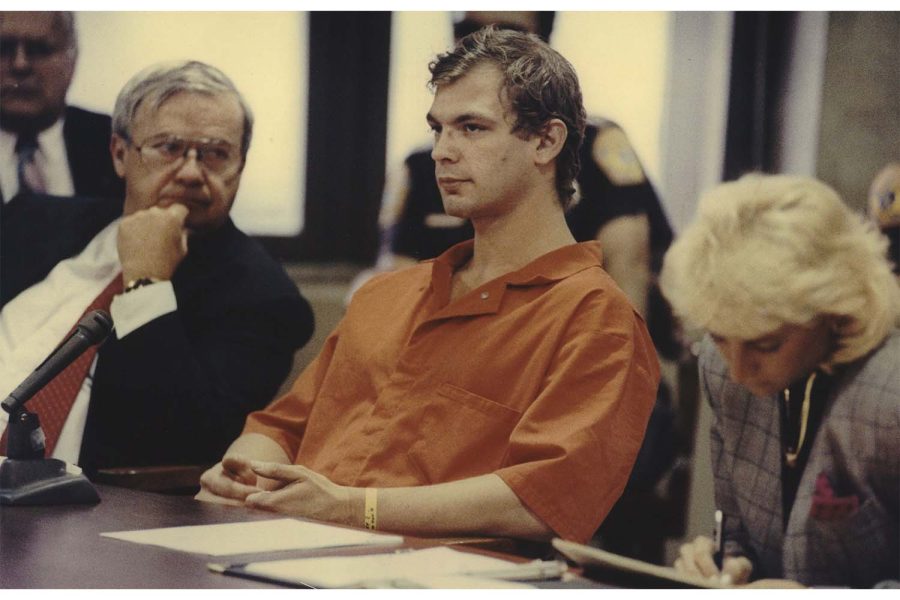 Serial killer Jeffrey L. Dahmer listens in court after he was charged in three more slayings Dahmer confessed to killing and dismembering 17 men and boys since 1978, including 11 whose remains were found in his Milwaukee apartment.

Not only do I think dressing up as Jeffrey Dahmer is acceptable, I encourage it.

If you want to dress up as a murderous necrophile who took 16 lives — and ruined many more — by all means, go ahead.

Do it so that I and everyone else knows to stay away from you.

If you think dressing up as Jeffrey Dahmer is a good idea, and not terribly insensitive, you haven’t thought critically about who Dahmer is and what he’s done.

A Netflix series recently came out about Dahmer. With it came a slight shift in the public perception surrounding the serial killer.

And when it’s Halloween, it’s only natural to want to dress up as something scary, especially something from pop culture.

And when it comes to scary people, there aren’t many out there scarier than Dahmer.

I myself dressed up as Scream and Darth Vader in my youth, both of which are examples of heinous figures who brutalized many people.

Unlike Scream and Darth Vader, Jeffrey Dahmer is real, and his actions affected real people.

He hurt not only his victims, but also the families and friends thereof.

So, if you want to dress up as Jeffrey Dahmer, do it.  You’ll be doing us all a favor by letting us know we’re better off staying out of your vicinity.

And I’ll be laughing at you as you wear those goofy glasses.

With the increased notoriety of Jeffrey Dahmer due to the recently-released Netflix series, “Dahmer – Monster: The Jeffrey Dahmer Story,” many people have taken this as inspiration for their Halloween costume.

Jeffrey Dahmer was responsible for killing 17 people. Take a minute to think of the magnitude of this. That’s 17 people who never got to experience another birthday, another hug, or another conversation with their mother.

Additionally, think of the unimaginable trauma their friends and family endured. Seeing people dressed as the person who took so much from them could reopen old wounds. There is no telling what kind of pain this could inflict on the still-living loved ones of the victims.

Jeffrey Dahmer is not a name that should go down in history. Giving him this fame and attention puts him on a pedestal, even if it’s for being evil. People like him do not deserve to be remembered.

Regardless, glorifying a monster like Jeffrey Dahmer by dressing up as him lessens the horrors of his actions.

Many may argue that dressing up as a serial killer is the norm for Halloween because it is a night of horror. The difference between dressing up as Hannibal Lecter or Jason Voorhees versus Jeffrey Dahmer is that one of them committed heinous acts while the other two are fictional boogeymen.

If you planned on dressing as Dahmer this Halloween, take a minute and think about the unintended consequences that come with normalizing a real-life serial killer.