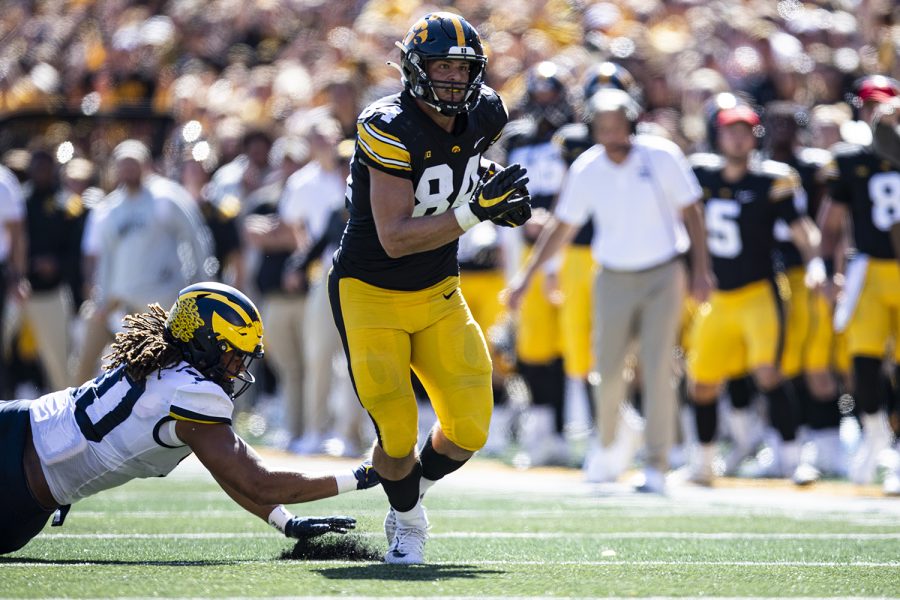 Iowa tight end Sam LaPorta (84) runs after a catch during a football game between Iowa and No. 4 Michigan at Kinnick Stadium in Iowa City on Saturday, Oct. 1, 2022. The Wolverines defeated the Hawkeyes, 27-14.

Point/Counterpoint | Who will win the Big Ten West?

The wild, wild west is usually a cliche used to describe the setting of an old cowboy movie starring Clint Eastwood or Sam Elliot.

If you’re reading this, you know who Kirk Ferentz and Charlie Jones are, but you might not know that Tanner Morgan calls the signals for the Minnesota Golden Gophers and Chase Brown gets chased by defenders as Illinois’ star running back.

The Hawkeyes, Golden Gophers, Fighting Illini, and Jones’ Boilermakers are each part of a six-way tie at the top of the seven-team Big Ten West along with Nebraska and Northwestern at 1-1 in conference play. Illinois, Northwestern, and Purdue are technically the top three teams because their Big Ten wins came against other teams in the West.

When the dust settles, I think Iowa will repeat as West champions and run into a Buckeye stampede at Lucas Oil Stadium, the home of the Indianapolis Colts.

Behind an improving running game and a stout defense, I believe the Hawkeyes have the horsepower to leave the rest of the West in the dust.

In all seriousness, Iowa’s loss to No. 4 Michigan last week at Kinnick Stadium gave me hope — in the second half.

The first half was bad, but Iowa got some first downs, which exceeded my expectations.

While the Hawkeye defense struggled in the first 30 minutes, I chalk that up to one simple thing: Michigan is better than Iowa. If Michigan was in the West, I would not be writing this.

But the fact that Iowa was six yards away from drawing within one score of the fourth-best team in the country with seven minutes left in the game, after scoring two safeties and a field goal against an FCS team a month ago, is promising.

Michigan is better than any team Iowa will face in the West, and the Hawkeyes held their own against the Wolverines. The Iowa pass blocking looked better than it has all year, and the defense made adjustments in the second half that limited Michigan to just 91 total yards in the final 30 minutes. Meanwhile, Iowa’s offense hummed to the tune of 190 yards in the final two quarters.

Kirk Ferentz’s teams don’t usually get worse as the season goes along, and this year’s model looks like it’s improving quickly. After last week’s showing, I wouldn’t be surprised if team buses destined for Indianapolis were leaving Iowa City in early December for the second-straight year.

Minnesota is likely going to win the Big Ten West this season. All the signs are there for the Golden Gophers, even though they’re currently fourth in the West standings.

Despite a 20-10 loss on Saturday at the hands of Purdue, the Gophers stand an impressive 4-1 as they enter their bye week. After a bye week, Minnesota will take on a tough Illinois team on the road Oct. 15.

I fully expect sixth-year senior quarterback Tanner Morgan to bounce back against the Illini after a rough outing against the Boilermakers where he threw for 257 yards and tallied three picks without tossing a touchdown.

The Bill Burr doppelgänger struggled against an underrated Purdue secondary with star running back Mohamed Ibrahim sidelined with an ankle injury. But Morgan has shown consistency throughout his seemingly never-ending tenure as the starting QB in Minneapolis.

Ibrahim is perhaps the most underrated back in the nation. The 2020 Big Ten Running Back of the Year and third-team All-American has tallied 567 yards on 89 carries in four games and averages two rushing touchdowns per game this year — tied for second in the country among running backs. Ibrahim’s return from injury will be vital down the stretch for Minnesota.

Although the Gophers boast a solid offense, their saving grace is their defense. Minnesota stands at No. 3 in the nation in both total and scoring defense, allowing just 222 yards and 8.8 points per game this season.

Following Illinois, the Gophers’ last six opponents of the season are No. 10 Penn State, Rutgers, Nebraska, Northwestern, Iowa, and Wisconsin.

I anticipate a Minnesota victory after the bye week. Illinois will come off a game against Iowa’s bruising defense, and PJ Fleck and Co. get an extra week to figure out how to shut down Chase Brown and the Illini rushing attack.

Every game will likely be a battle for the Gophers moving forward. There are no easy wins in the Big Ten, and I forecast a loss to the Nittany Lions in Week 8, but the rest of the way is wide open for Minnesota. If it manages to hold off Rutgers, Nebraska, and Northwestern, there’s a good chance the Gophers enter their Nov. 19 matchup with Iowa at 8-2.