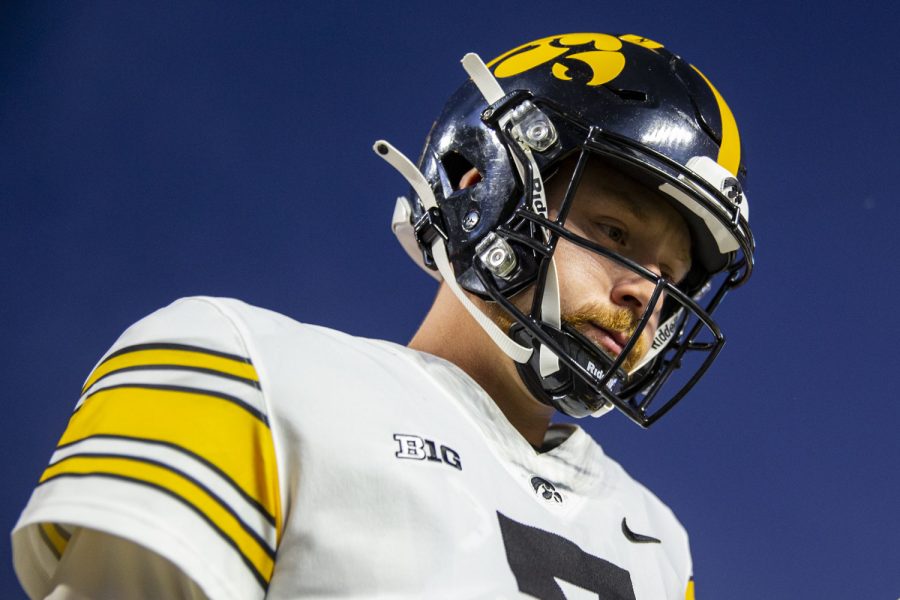 Iowa quarterback walks onto the field before a football game between Iowa and Rutgers at SHI Stadium in Piscataway, N.J. on Saturday, Sept. 24, 2022. The Hawkeyes defeated the Scarlet Knights 27-10.

Despite a 3-1 start to the season, the road ahead for Iowa football will be a bumpy one. The Hawkeyes have maybe six realistically winnable games left on the schedule, and although Kirk Ferentz and Co. seem to overachieve every year, this season might be the outlier.

With eight games remaining, the Hawkeyes have several tough opponents looming. The Hawkeyes’ first real test is coming this Saturday when No. 4 Michigan comes to town.

Iowa’s scoring defense stands No. 1 in the nation, allowing just 5.75 points a game, but the Wolverines average 50 points per contest this season. Compared to the dead-last (No. 131) Iowa scoring offense, Jim Harbaugh’s crew looks like the Greatest Show on Turf.

Up ahead, currently undefeated teams like No. 3 Ohio State and Minnesota will likely beat the Hawkeyes too. Stopping the Buckeyes’ aerial attack behind the arm of CJ Stroud, and the Minnesota rushing attack spearheaded by 2020 Third-Team All-American back Mohamed Ibrahim, will be challenging.

Always tough rivals Wisconsin and Purdue will put up a good fight, respectively. It will be hard for the Hawkeyes to take down both those teams with their pedestrian passing numbers and a young, offensive line that is still building chemistry, and there’s a good chance that Charlie Jones puts up a bunch of yards on the Iowa defense à la David Bell.

Until the Hawkeyes find a more effective coordinator to run their arcane offensive scheme, they’ll find very little success. Expect a 5-7, or at best 6-6, record with a late-season collapse capped off by a win over Nebraska.

If everything goes wrong, the Hawkeyes will go 5-7 with losses to Iowa State, Michigan, Ohio State, Northwestern, Purdue, Wisconsin, and Minnesota. It’s unlikely that Iowa would be chosen for a bowl with a sub .500 record.

Grant said Iowa will miss out on a bowl game this year if ‘“everything goes wrong” for the Hawkeyes over their final eight regular season games.

Well, first, I can tell you two teams that everything has gone wrong for so far this year, and they’re both on the Hawkeyes’ upcoming schedule: Nebraska and Northwestern.

Remember way back in Week 0 when the Wildcats beat the Cornhuskers in a thrilling 31-28 nail-bitter in Dublin, Ireland? Yeah, me too.

We thought that Nebraska was going to be the same old lose-heartbreaking-one-score-games team Iowa fans have come to know and love, and we thought Northwestern was on its way to contending for a Big Ten West crown after the ‘Cats offense looked leaps and bounds better than it had in 2021.

But both Nebraska and Northwestern have fallen hard. The Huskers fired head coach Scott Frost after a stunning home loss to Georgia Southern and then took a 49-14 defeat against Oklahoma with interim head coach Mickey Joseph at the helm. From the outside, it looks like Lincoln is in shambles heading into Big Ten play.

Northwestern’s situation seems even worse. With three straight losses to Duke and mid-major foes Southern Illinois and Miami of Ohio, the Wildcats are 1-3 on the season. I didn’t even know Southern Illinois had a football team.

All that to say you can confidently put Ws by Iowa’s logo on Oct. 29, when Northwestern comes to town for Homecoming, and Nov. 25 when the Hawkeyes face the Huskers at Kinnick on Black Friday.

Those victories put Iowa at a minimum of 5-7 and I think, behind the prowess of their defense and special teams, along with what looks like an improving running game, the Hawkeyes will earn one or two more wins.

Don’t get me wrong, to get to 10 victories, as the Hawkeyes did a year ago, the passing game needs to improve considerably, and that’s not going to happen.

But Phil Parker’s defense is No. 1 in the nation, Tory Taylor is the best punter on the planet, and there was some open space for Iowa’s backs last week against Rutgers, who held the country’s best rushing defense before the Week 4 matchup. 7-5, book it.