Sculptor Nigel Hall brought his magnificently large ellipse sculptures to America and the University of Iowa with the help from former Tippie College of Business Dean Gary Fethke, and his wife and Professor Emeritus Carol Fethke. 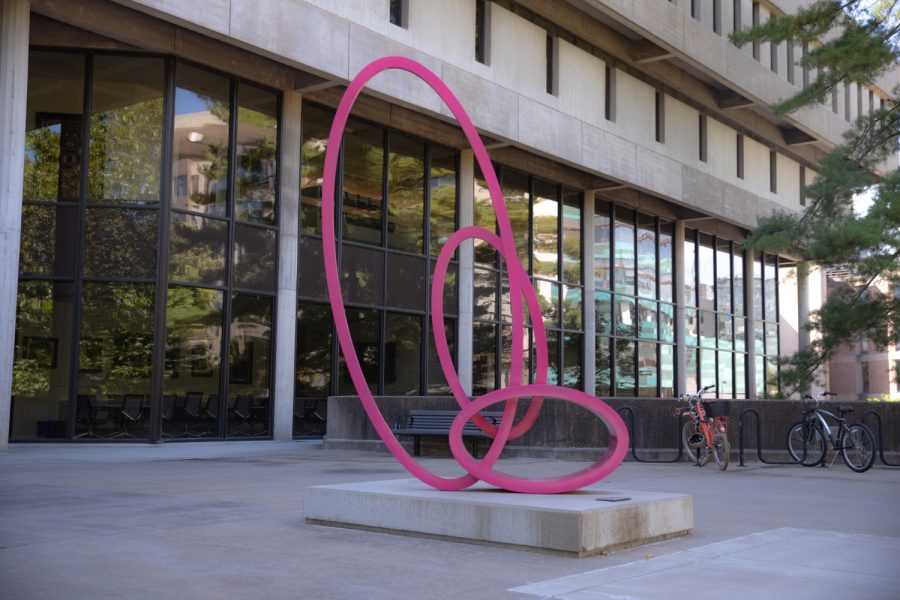 An art installation displaying Nigel Hall’s work at the College of Nursing on September 22, 2022.

While Jackson Pollock’s Mural was on tour in London at the Royal Academy in 2016, British sculptor Nigel Hall overheard Gary Fethke talking to a student about the painting. In front of Mural, which is now on display in the Stanley Museum of Art’s inaugural exhibition, Hall and his famous ellipses sculptures found their way into the University of Iowa.

Introductions were made, and Fethke, the former dean of the UI’s Tippie College of Business, and his wife Carol Fethke, a former professor of economics and marketing at Tippie, visited Hall’s gallery — the pair left with a friendship newfound love for his intricate ellipses.

An ellipse can be described as a delicate oval that creates a sense of unity and movement for the viewer.

Originally, the couple donated the sculpture Gravity | Levity in 2019, in conjunction with the College of Nursing. After visiting one of Hall’s galleries in London, Carol said she fell in love with the large, hot pink outdoor sculpture.

Always looking to donate more art to the university, they kept coming back to a maquette — a small preliminary model of a sculpture — of Hall’s gold Natural Pearl, in shows and displays around the U.K. They said they just couldn’t pass it up.

After the pair conversed with Hall, the sculptor decided he wanted to recreate the piece on a larger scale, which he said he now realizes was a bit bold of himself.

“It’s 12 and a half foot high, so it’s quite big,” Hall said. “It’s made in Corten steel, which is the steel that doesn’t rust away, it oxidizes and forms a beautiful, dark leathery sort of skin. It retains that for quite a long time, if not forever.”

On Sept. 23, there will be a formal dedication of Hall’s sculpture Natural Pearl, donated by the Fethkes, at its new home in the courtyard of the Pappajohn Business Building. The event will consist of an interview between Hall and Stanley Museum of Art Director Lauren Lessing, along with a reception in the BizHub.

The piece comes from a collection of similar sculptures, consisting of all big interwoven ellipses with pearl-related titles. Hall said he likes the idea that a pearl forms from a piece of grit that gets into the shell of an oyster and gathers sediment, piling up and turning into a pearl — the idea of something beautiful within something most robust.

He has been working with ellipses throughout his life, being surrounded by them every day. Ellipses, he said, are often mistaken for circles; like a coffee cup rim where the viewer very rarely looks at it from the top down, but rather from the side.

“From the smallest to the largest, we live with ellipses, and they’re beautiful to draw and beautiful to make,” Hall said. “For me it is beautiful to look at. They have a dynamic, and a life.”

Though Hall often welds sculptures himself out of materials like wood and bronze, he also has a team to help him make big metal pieces like the ones featured in Natural Pearl. Once Hall presents them with an accurate model, as well as drawings and measurements, the group gets to work.

Shipping and installing the around-7000-pound piece was the hard part of getting the sculpture to the UI. After bouncing around from England to Montreal and finally Natural Pearl made it to its end location in Iowa.

Throughout the fall from Sept. 19 to Nov. 30, Hall will have several drawings and maquettes of his work showcased around the UI in a campus-wide exhibition. The Fethkes believe it’s important to have art on campus because “it makes people think.”

“You look at what artists do, and you see the world differently,” Gary Fethke said. “What we’re trying to do is to encourage our students, staff, and faculty to think beyond themselves, to think about beautiful things.”