Nearly 80 of the East Haven, Connecticut, product's friends and family members will be at SHI Stadium in Piscataway, New Jersey, Saturday. 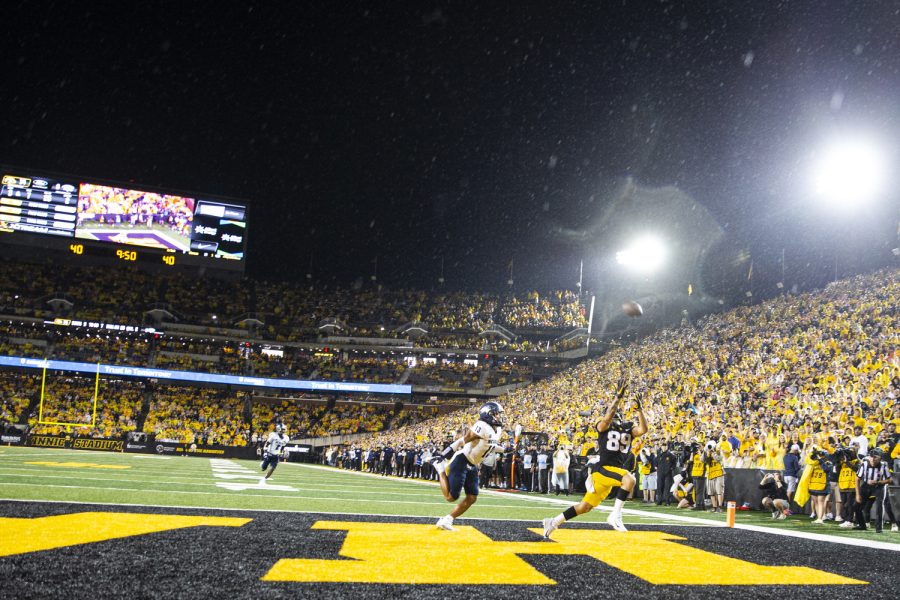 Iowa wide receiver Nico Ragaini attempts to catch a pass during a football game between Iowa and Nevada at Kinnick Stadium in Iowa City on Saturday, Sept. 17, 2022. Ragaini, in his first game of the season, led the Hawkeyes in receiving yards with 56. The Hawkeyes defeated the Wolf Pack, 20-7.

Nico Ragaini’s return to the field last week was well-timed for both his family and Iowa football.

The Hawkeyes are traveling to Piscataway, New Jersey, this week to take on the Rutgers Scarlet Knights. The senior wide receiver is expecting 79 of his friends and family members to attend the game.

“It’s a pretty awesome feeling, for sure,” Ragaini said at an Iowa football media availability session Tuesday. “Having a bunch of people having your back and everything is a great feeling. I don’t feel any pressure towards it because they all believe in me. So, I’m just going out there, doing what I do, and showing out for my friends and family.”

During his five-year collegiate career, Ragaini has never played within 200 miles of his hometown of East Haven, Connecticut. Rutgers’ SHI Stadium, where the 6-foot, 196-pounder is playing on Saturday, is 118 miles from East Haven.

Ragaini has hosted family and friends at Iowa games before. He said 20-30 people came to watch him play in the 2021 Iowa-Penn State game at Kinnick Stadium.

Ragaini added his parents, Gianni and Josanna Ragaini, have been at every collegiate game he’s played.

“Both my parents are teachers, so it’s kinda tough for them to get out to games and stuff,” Ragaini said. “But they make it happen every single week, which is just like the best thing ever. They fly into Chicago most of the time. Then, they drive here from Chicago because the flights are just so expensive to get to Cedar Rapids, which is just so awesome of them.”

While Ragaini has lived in Iowa for the last five years, he’s still adjusting to the culinary scene. The fried foods in the Midwest don’t stack up to the Italian cuisine available on the East Coast, in Ragaini’s eyes.  After Saturday’s game, an East Haven delicacy will await him.

“There’s this Italian meat market back at home called Liuzzi,” Ragaini said. “There’s no delis out here in Iowa, which is like the hardest thing for me. We don’t even have Italian bread like the way I used to have Italian bread. That was seriously a tough transition for me.”

Ragaini added his grandmother will be give him a postgame sandwich with prosciutto, tomato, and vinegar from Liuzzi’s.

Ragaini missed the Hawkeyes’ first two games of the season with a stress fracture in his right foot. He underwent surgery to have a screw put in to repair the damage.

“I hurt it at Kids Day [at Kinnick],” Ragaini said of the injury he sustained on Aug. 13. “That was like five Saturdays ago. To be honest, I thought it was just a bruise. I kept touching it and I was like, ‘oh, this is nothing.’ So, I finished the practice, made some plays. I felt pretty good.

“Then, I went to the training room and had them look at it just so I could feel better about it. Then, they took an X-ray and said I had a little stress fracture.”

After his season debut in Iowa’s seven-hour, lightning-delayed game against Nevada on Sept. 17, Ragaini said an injury like his usually takes eight weeks to heal. He added that he feels lucky to have come back in four weeks.

In his first game back, Ragaini recorded two catches for 56 yards. One of his receptions was a 46-yarder that he appeared to wrench out of a defensive back’s hands.

“[Offensive coordinator Brian Ferentz] said we were going to take a shot when I was laying around in the locker room,” Ragaini said. “I really thought the game was going to be canceled the way the lightning was happening.

With Ragaini back on the field, the Hawkeyes posted their best offensive performance of the season against the Wolf Pack, scoring 27 points and gaining 337 yards. Senior quarterback Spencer Petras finished the game 14-of-26 for 175 yards and a touchdown.

Sophomore wideout Arland Bruce caught the Hawkeyes first pass TD of the season during the first quarter. True freshman running back Kaleb Johnson ran for 46- and 55-yard touchdowns on his way to a 103-yard rushing performance.

Ragaini and company will likely have their hands full with Rutgers’ defense Saturday. The Scarlet Knights are ranked 10th in the nation in total defense, allowing just 240.3 yards per game. Iowa’s offense is gaining 217 yards a contest, on average.

Ragaini was listed as a backup receiver on Iowa’s Week 4 depth chart. Bruce and redshirt freshman Brody Brecht are slated to start for the Hawkeyes.

Iowa will likely be without wideout Keagan Johnson, who was a projected starter during the offseason. At his weekly press conference on Tuesday, Iowa head coach Kirk Ferentz said Johnson isn’t likely to play against Rutgers.

Johnson missed Iowa’s first two games of the season and played limited snaps in the Hawkeyes’ shutout win over the Wolf Pack.

“It’s a nagging injury, and there’s nothing to say right now,” Ferentz said. “We’ll take it a day at a time.

Saturday’s game is the first Iowa will play against a conference opponent this season. Rutgers comes into the matchup 3-0.

Despite the stakes, his recent injury, and the familial audience he’ll be competing in front of, Ragaini isn’t worried about what might happen on the gridiron Saturday.

“When I was hurt, a bunch of people were texting me saying, ‘you better come back for this game because I just bought my Rutgers ticket,’” Ragaini said. “So, it’s just another game. I’ll have a big crowd for me there. I just gotta focus on doing everything right, and being sound in my fundamentals, and catching every ball. But it’ll be cool to have my family and friends there, for sure.”