The Cornhuskers dismissed Erik Chinander on Sunday. The Badgers will be without nine players as they take on the No. 3 Ohio State Buckeyes on Saturday. 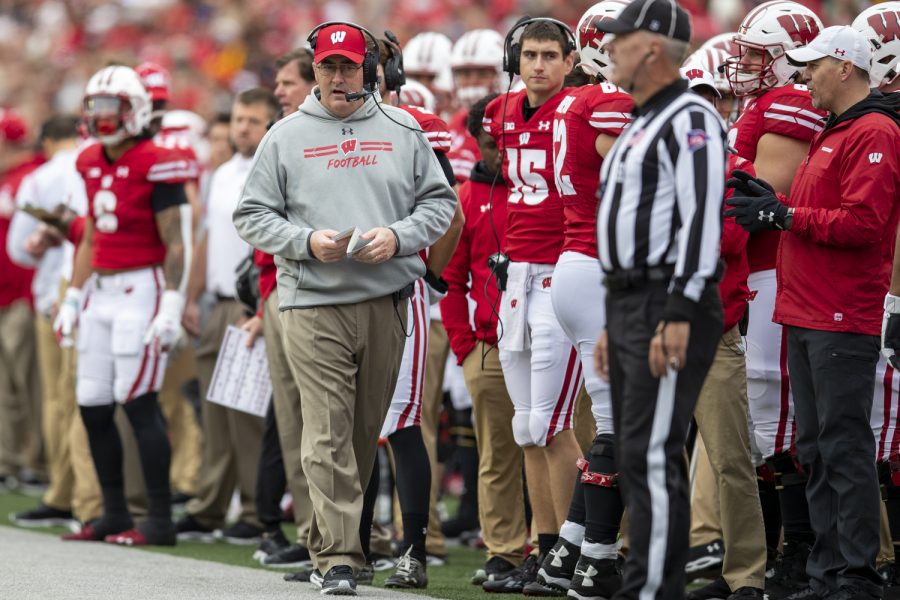 Wisconsin head coach Paul Chryst talks on a headset during a football game between No. 9 Iowa and Wisconsin at Camp Randall Stadium on Saturday, Oct. 30, 2021. The Badgers defeated the Hawkeyes 27-7. (Jerod Ringwald/The Daily Iowan)

Nebraska football fired its defensive coordinator, Erik Chinander, on Sunday. It’s the second coaching dismissal the program has made this season. The Cornhuskers relieved Scott Frost of his head coaching duties on Sept. 11.

Chinander was terminated after now-1-3 Nebraska’s 49-14 loss to Oklahoma Saturday at Memorial Stadium in Lincoln.

Nebraska has surrendered 514 yards and 35.5 points per game this season. The Cornhuskers pass and rush defenses rank 115th and 124th in the nation, respectively.

“We appreciate Erik and the work and dedication he has given to our football program,” Nebraska interim head coach Mickey Joseph said in a statement. “At this time, I feel it is in the best interest of the Nebraska football program to take the leadership of the defense in another direction and decided Bill Busch will take over as defensive coordinator.”

Busch joined the Cornhuskers’ staff before the 2022 season began. During Nebraska’s first four games of the year, Busch served as special teams coordinator.

Joseph said he promoted Joey Connors to special teams coordinator to replace Busch. Connors also joined Nebraska’s staff at the beginning of the 2022 season. Before he got his promotion, he was a special teams quality control coach.

The Cornhuskers are taking the first of their two byes this week. Nebraska played Northwestern on Aug. 27 as part of college football’s new Week 0. Teams that play during Week 0 get byes during the nonconference and conference seasons.

Nebraska’s next game is scheduled for Oct. 1. The Cornhuskers will take on the now-3-0 Indiana Hoosiers in Lincoln.

Badgers battling injuries ahead of matchup with No. 3 Ohio State

Wisconsin released its injury report for Week 4 on Monday. The 2-1 Badgers categorized nine student-athletes as “out” for their bout with the 3-0 Buckeyes.

The Athletic projected cornerback Alexander Smith to start before Wisconsin’s 2022 campaign began. He’s slated to miss his fourth consecutive game this week. Smith has been dealing with a hamstring injury, according to the Wisconsin State Journal.

In 36 career contests, the Culver City, California, product has recorded an interception, a fumble, three pass breakups, and 19 tackles.

Outside linebacker Aaron Witt and safety Hunter Wohler will also miss Saturday’s Ohio State-Wisconsin game. Witt hasn’t competed since 2020 because of a right leg injury. Wohler appeared in the Badgers’ season-opener against Illinois State but hasn’t stepped on the field since with a left leg injury. The safety played in all 13 of Wisconsin’s games in 2021, notching one sack and three tackles for loss.

Even without some of its players, Wisconsin’s defense has held opposing passers to 170 yards per game in 2022. The Badgers have intercepted seven throws this season.

Ohio State quarterback C.J. Stroud has thrown for 941 yards and 11 touchdowns this year. He has yet to turn the ball over. The Buckey offense has averaged 47.7 points and 565.3 yards per game through three weeks of action.

Wisconsin tight end Cam Large and quarterback Chase Wolf will also be inactive Saturday as they both have right leg injuries. Safety Travian Blaylock, inside linebacker Luna Larson, and defensive ends Mike Jarvis and Isaac Townsend have all previously been declared out for the season.

Right tackle Riley Mahlman, who has missed Wisconsin’s last two games with a left leg injury, was not listed on the Badgers’ Week 4 injury report.

Wide receiver Stephen Bracey Jr. and inside linebacker Spencer Lytle weren’t included on Wisconsin’s injured list, leaving the door open for both to play their first games of the season Saturday.