The resolution pushes to alleviate obstacles for students when voting, especially for non-traditional students. The resolution is yet to go in front of University of Iowa department chairs and the state Board of Regents. 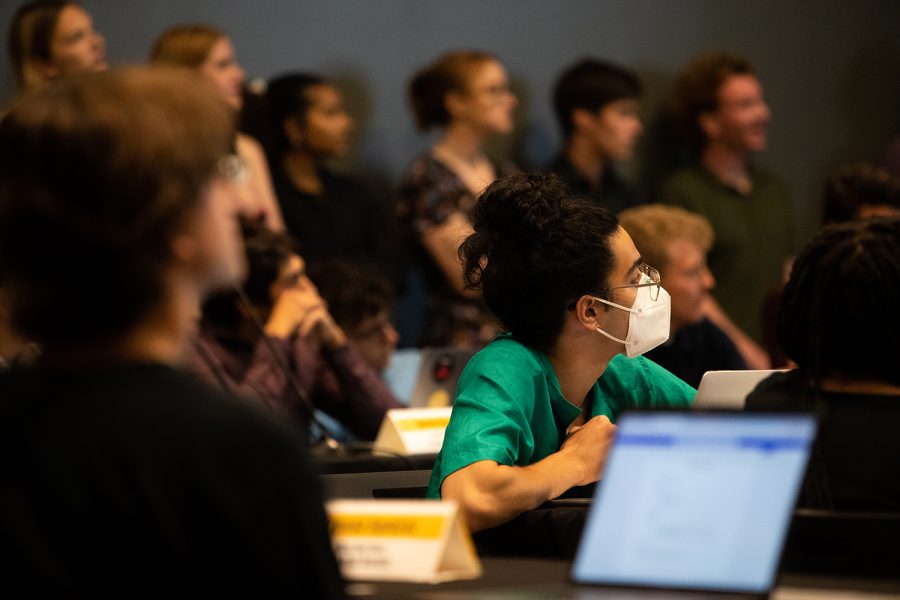 Senators sit in at an Undergraduate Student Government Meeting in the Black Box Theater in the IMU on Tuesday, Sept. 20, 2022.

The University of Iowa’s Undergraduate Student Government passed a resolution pushing to establish Election Day as a university holiday.

The group voted to pass the resolution at its Sept. 20 meeting. The establishment of the holiday will allow UI students more time to vote on Election Day.

The resolution called for Election Day to be recognized in both midterm and general election years.

For Election Day to become an official holiday adopted by the UI, it will have to be approved by both the university and the regents.

Emma Speer, chair of the Governmental Relations Committee for USG, proposed the resolution.

The UI currently has over 30,000 students enrolled.

USG has yet to reach out to the state Board of Regents and university department chairs, Speer said.

“We just want to know that we have the backing of student government and that this is supported,” she said.

USG Sen. Hannah Williamsen was in support of the legislation. She said she found the move important.

“I’ve been somebody who does other activities and schooling. I’ve had to miss an election,” Williamsen said. “I think [the legislation] is really beneficial for our students who don’t always have the best transportation opportunities.”

Sen. Andrew Froemel also spoke in support of the resolution at the meeting during debate.

“It’s really important that everyone gets a fair opportunity to vote and make their voices heard,”  Froemel said during debate. “Each election’s important and our votes and choices have consequences.”