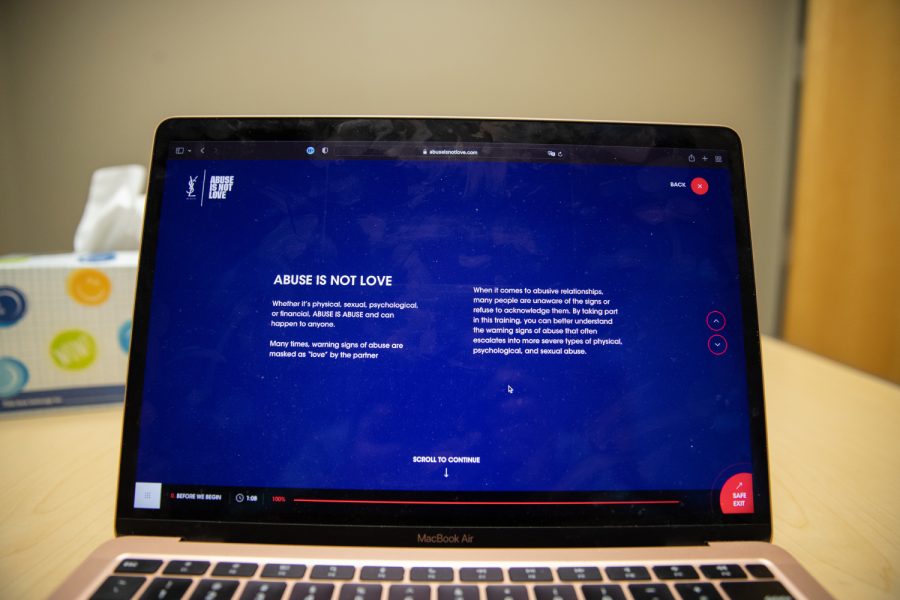 An online training program created by Prof. Beth Livingston to identify potential signs of domestic abuse is seen on a laptop on Tuesday, Sept. 20, 2022.

In partnership with Yves Saint Laurent, a fashion company owned by L’Oréal, Livingston helped develop and write the program titled “Abuse is Not Love.”

Livingston first started working with the ‘Abuse is Not Love’ program in 2020-21.

The project is designed to help people of all different demographics and nationalities, Livingston said.

“One of the things that they really wanted to do with the program called ‘Abuse is Not Love’ was to come up with a way to access and impact people around the world,” she said. “And their thought was, we should come up with an awareness of trauma training, awareness of what they called the ‘9 Signs of Abuse.’”

The 9 Signs of Abuse was a campaign by YSL that focuses on the most common signs of abuse: ignoring, blackmailing, humiliation, manipulation, jealousy, control, intrusion, isolation, and intimidation.

The campaign began in 2020 and involved videos explaining the signs including one with actress Zoë Kravitz. As of Sept. 20, 114,983 people have used the training.

The website hosting the project features a page dedicated to the nine signs and their definitions. The training itself is comprised of four training segments discussing what an abusive relationship is and how to identify it.

The training also includes eight interactive examples of abuse. These examples are text messages showing one of the nine signs of abuse, which participants then have to identify which sign it is, Livingston said.

“We set up the training that was like text messages with gender neutral names, and in ways that people can hopefully see themselves in those messages,” she said. “To be able to say, ‘Oh, I’ve had these sorts of conversations before, and I never considered that maybe this was unhealthy.’”

The training takes about 15 minutes to complete and features information on how to respond to abuse situations.

The website also links additional resources, such as the number for the National Domestic Violence Hotline and organizations around the world focused on aiding individuals in abusive relationships.

One organization is It’s On Us, a U.S.-based nonprofit started during the Obama Administration to address sexual assault on college campuses. It’s On Us has been a partner with YSL since 2020 and works with the brand to help identify and prevent partner abuse.

It’s On Us Executive Director of Tracey Vitchers said programs like ‘Abuse is Not Love’ are an important way to educate people about what an abusive relationship could look like.

“We know that intimate partner and dating violence can affect anyone, and that it’s really important for folks to know what the signs of an unhealthy relationship are so that if they are in one, they can safely exit,” Vitchers said. “Or if somebody has a friend or family member who’s in one, that they know how to support them, and getting the support and help they need.”

Another supporter of the training is Tim Mousseau, a nationally known speaker on sexual assault. Although not involved in the creation of the program, Mousseau has seen it and spoke highly of it.

“Discussing sexual violence prevention in any form is a complex and sometimes overwhelming matter. It can be challenging to provide targeted, relevant, and meaningful information,” Mousseau said. “This program does all three in a highly effective manner.”

For Livingston, the training is not only about prevention, but giving people a feeling of empowerment.

“If the sort of work that I’m partnering with YSL on can help even one person to feel more empowered in their relationship and to avoid the sort of pitfalls, I think it will have been worth it,” Livingston said.