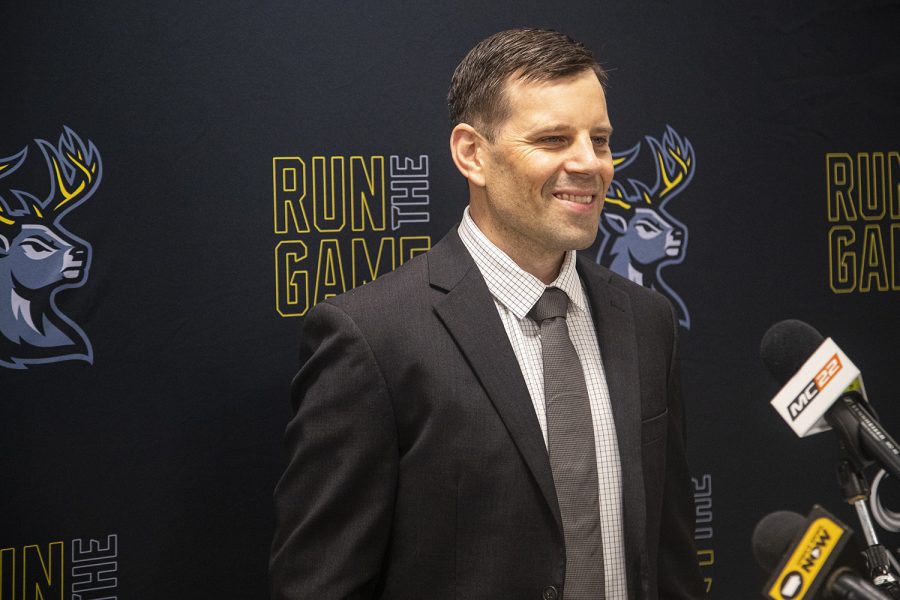 As the Iowa Heartlanders approach the first game of the 2022-23 campaign against the Idaho Steelheads on Oct. 21, they are working toward finalizing their 2022-23 season-opening roster.

The second-year ECHL franchise has added 11 forwards, seven defensemen, and one goaltender to its 2022-23 roster as of Tuesday. The Heartlanders must submit their season-opening roster to the league office — which can include up to 21 players — by 2 p.m. on Oct. 19.

Head coach Derek Damon said the Heartlanders are always trying to become better at every position. The 2021-22 Heartlanders finished last place in the ECHL Central Division at 29-33-9-1.

After taking a near-month break from transaction updates, the Heartlanders announced they signed forward Guus van Nes from Quinnipiac University and defenseman Skylar Pacheco out of Ligue Magnus — the top French league — on Sept. 13. The Heartlanders also traded forward Josh Koepplinger and a future considerations to the Maine Mariners for forward Brendan Robbins.

“What we wanted to improve on is just getting the right guys that want to be here in the Coralville area that want to be a Heartlander, and I can honestly say that all of our guys are dialed in,” Damon said. “They’re excited and ready to go for training camp on Oct. 8.”

The Heartlanders will have their first training camp skate on Oct. 9 after they complete physicals. Unlike last season, they won’t play a preseason game, but they will have an intersquad scrimmage at Xtream Arena on Oct. 12 that fans can attend.

Damon said the Heartlanders improved their physical size from their 2021-22 roster by signing forwards Alec Broetzman, C.J. Yakimowicz, van Nes, and defenseman Justin Wells — all of whom are 6-foot-1 or taller.

“I feel like with our size, we’re not going to be pushed around as much,” Damon said. “Also, it allows us to lean on players to wear off our opponents at different times of the game.”

The Heartlanders could also receive players from their AHL affiliate, the Iowa Wild, at any point during the season.The Wild signed forwards Mitchell Balmas, Kevin Conley, and Patrick Curry to one-year, two-way AHL contracts over the summer, meaning those players could potentially suit up for the Wild and Heartlanders over the course of the upcoming season.

The Heartlanders acquired defenseman Matt Murphy’s ECHL rights from the Fort Wayne Komets in exchange for forward Kaid Oliver in July. Murphy then agreed to terms with the Wild under a one-year, two-way AHL contract.

“We feel that if we do get a chance to have those guys down from Iowa, they’re going to help us be better,” Damon said. “But our goal this year as a staff is that we wanted to make sure that we had good, solid, ECHL players so that our depth and our core is solid all-around.”

Last season, the Heartlanders received forwards Kris Bennett and Ryan Kuffner, among other talented skaters, from the Wild. Bennett led the club with 35 goals and 73 points and was named the ECHL Rookie of the Year. But he missed 22 Heartlanders contests because he was recalled to the Wild multiple times.

Kuffner topped the franchise with 46 assists and was February’s ECHL Player of the Month, yet he played in 41 of the Heartlanders’ 72 games because of recalls and injury.

For comparison, forward Zach White led the Heartlanders on ECHL contracts with 51 points. He re-signed with the franchise for the 2022-23 campaign.

The Heartlanders will hold a free agent camp on Saturday and Sunday from 1:30 p.m. until 3:30 p.m. at the rink in the Coral Ridge Mall. Iowa’s hockey operations staff will evaluate up to 40 participants through team drills, individual skill work, and scrimmages.