Rutgers has three quarterback listed as starters on its Week 4 depth chart. Two of those QBs are considered game-time decisions ahead Saturday's contest. 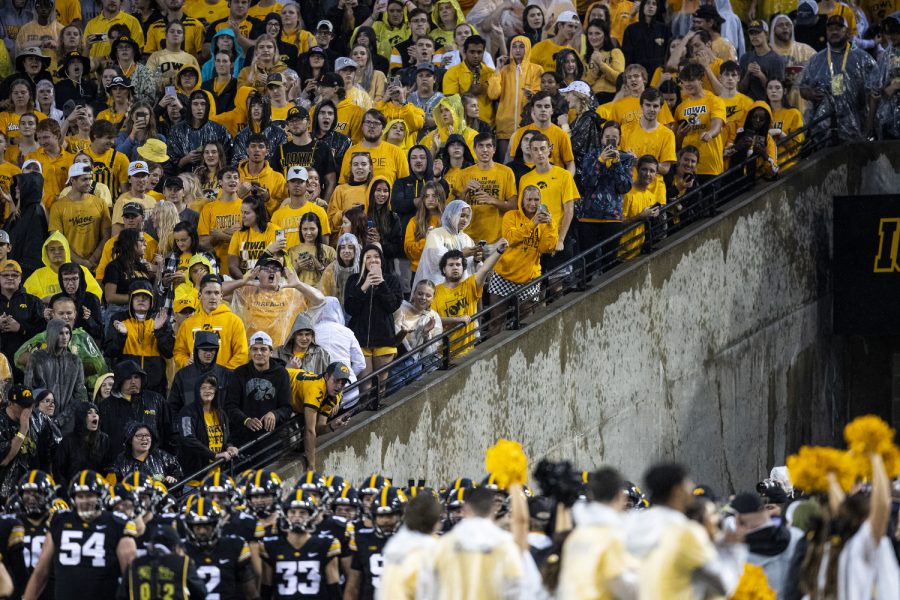 The Iowa student section cheers on the Hawkeyes before a football game between Iowa and Nevada at Kinnick Stadium in Iowa City on Saturday, Sept. 17, 2022. The Hawkeyes defeated the Wolf Pack, 27-0.

Iowa football has been showered with jeers during its first three contests of the season, and the Hawkeyes have yet to play a road game.

Petras and other Hawkeye seniors lead the team out of the tunnel, which is in the middle of Iowa’s student section. In recent weeks, AC/DC’s “Back and Black,” the song the Hawkeyes play as they walk out of locker room and tunnel, has been drowned out by boos.

While punter Tory Taylor gets “MVP” chants from fans when he’s out on the field, he’s frustrated with the Iowa faithful.

“I’ve never understood where the booing has come from at the start of the game,” Taylor said. “I get as the game goes on, if someone’s not performing or there’s certain calls that they might not like, but I can’t understand. I get that certain people, they’re going to be angry if things don’t go their way, but booing at the start of the game, I mean, how’s that meant to give someone confidence? How’s that meant to give the team confidence?

“I just think it’s pretty silly and immature,” he added. “Like I said, I get why fans do it, but it’s really not going to help.”

Four different players have seen significant action at quarterback for Rutgers this season — including a tight end.

Johnny Langan, who used to play quarterback, took one snap under center in second quarter of Rutgers’ 66-7, Week 2 win over Wagner. Langan threw a 43-yard touchdown on the play.

Vedral, the Scarlet Knights’ two-year starting QB, sustained an injury at the end of fall camp. Wimsatt was injured in the first quarter of Rutgers’ win over Temple in Week 3.

Both Vedral and Wimsatt will be game-time decisions against Iowa on Saturday.

“It’s kind of unsettling, you have two quarterbacks that are game-time decisions,” Schiano told NJ.com. “Thank goodness Evan [Simon] is healthy. … We’ll prepare for whoever we have that the doctors tell us are going to be able to play.”

Schiano did not specify if Langan will have reps at both tight end and quarterback on Saturday.

For now, the Hawkeyes are preparing for three different quarterbacks.

“You’re just never quite sure what you’re going to get, and it sounds like they’re not sure, either,” Iowa head coach Kirk Ferentz said. “I guess there’s good news: we’ve seen all three quarterbacks on film, so we’ve got that ability to at least know what to expect a little bit. But you just never know, so we’ll just have to try to be ready and adjust as we go.”

Johnson has been dealing with an unspecified injury and missed the first two games of the season. He made an appearance against Nevada on Saturday but did not record any statistics. Ferentz said Johnson was only available for the Hawkeyes’ first 30-35 snaps.

Johnson likely will not play this weekend, Ferentz said.

“It’s a nagging injury, and there’s nothing to say right now. We’ll take it a day at a time,” Ferentz said. “He hasn’t practiced yet this week, so we’ll see. It’s just day-to-day.”