Johnson, who has an unspecified injury, recorded no receptions in his return against Nevada on Saturday. 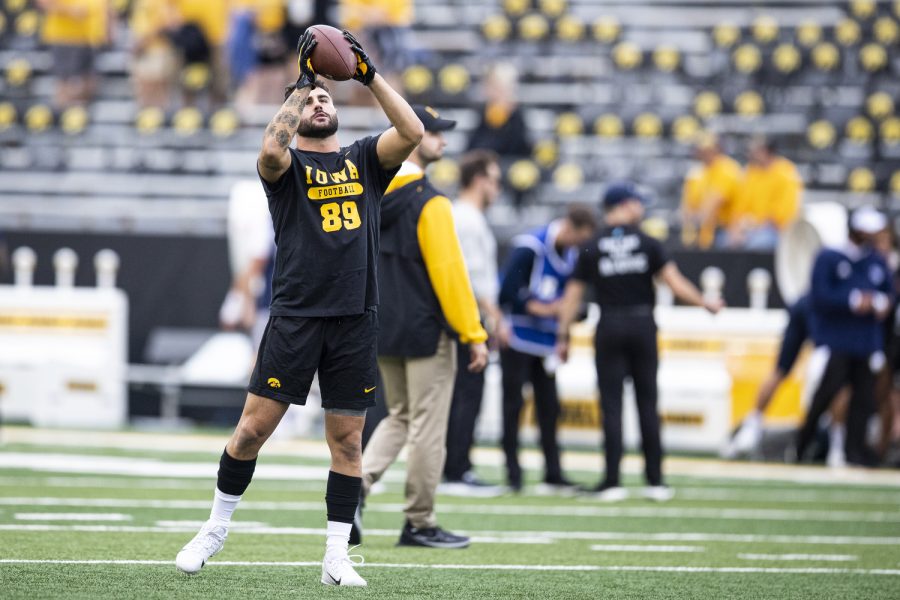 Iowa wide receiver Nico Ragaini catches a ball before a football game between Iowa and Nevada at Kinnick Stadium in Iowa City on Saturday, Sept. 17, 2022. Ragaini did not play in Iowa’s first to matchups this season.

“I was really lucky to be able to come back so soon because sometimes it takes up to eight weeks for the comeback,” Ragaini said Saturday. “But I got lucky with just four, so I was able to play today, which I’m super grateful for.”

The 6-foot, 196-pounder was limited in his return to action against Nevada on Saturday. He had two receptions for 56 yards in the lightning-delayed game.

“Probably the biggest gain for us was Nico, because he’s a veteran,” head coach Kirk Ferentz said. “He has a veteran presence in a very young room. He’s a good player, he’s nifty and he knows how to play, he really does. That was good.”

Ragaini is listed as a No. 2 receiver behind sophomore Arland Bruce, who has started all three games for the Hawkeyes so far this season. Bruce has racked up nine receptions for 127 yards and a touchdown in 2022.

The Hawkeyes now have three scholarship wide receivers at their disposal: Ragaini, Bruce, and redshirt freshman Brody Brecht. Brecht, who didn’t play in 2021 because of injury, overtook walk-on Alec Wick for a No. 1 spot in the Week 4 depth chart. Through three games this year, Brecht has recorded one reception for four yards.

While Ragaini made a return to the Hawkeye depth chart, sophomore starter Keagan Johnson remained absent. Johnson missed the first two games with an undisclosed injury and played sparingly in the Hawkeyes’ victory over the Wolf Pack.

He appeared in the game and recorded no statistics. Johnson didn’t play following the lightning delays in the third quarter.

“He just didn’t feel like he could get loose. Such unusual circumstances,” head coach Kirk Ferentz said. “ … I think just the disruption probably affected him today.”

After going 2-for-2 on field goal attempts on Saturday, true freshman Drew Stevens has taken the No. 1 kicking spot from sophomore Aaron Blom.

Stevens also made all three of his extra point attempts on Saturday.

Ferentz held an open kicking competition between Stevens and Blom throughout the offseason, and Blom originally won the spot.

But Blom went 1-of-3 on field goal attempts through the first two games of the season, missing a potential game-tying field goal against Iowa State on Sept. 10.

“The guys have been going back and forth and I’ve been saying all along we’re probably going to ride the roller coaster a little bit,” Ferentz said following Saturday’s game. “But pleased with both guys. Aaron, you haven’t seen the last of him. He’s done a good job. We have two good kickers right now. Hopefully they can get comfortable.”

“He has been fun to work with and he has done things,” Ferentz said of Kaleb Johnson. “He has been in the other games, but hasn’t really looked great. It was good to see him run with confidence tonight and he got a little bit of daylight and knew what to do with that, that’s for sure.”