A handful of former Hawkeyes seized new opportunities in the NFL’s second week. 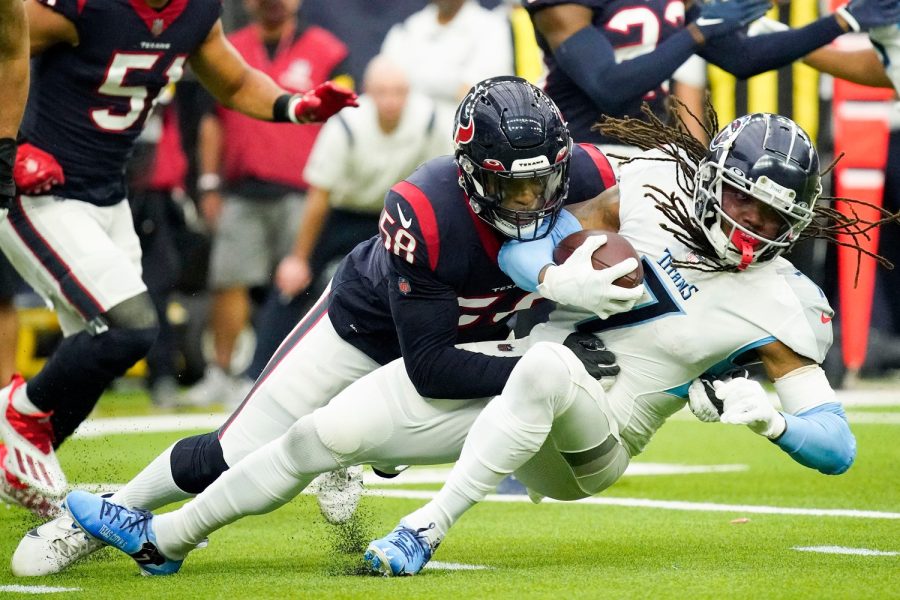 The NFL’s second week of action was a mixed bag for former Iowa football stars.

Lions’ Pro Bowler TJ Hockenson pulled in three catches for 26 yards in a Detroit victory, and third-year tight end Noah Fant had just two catches for 11 yards for the Seahawks in a blowout loss to San Francisco.

Tampa Bay’s All-Pro tackle Tristan Wirfs engaged in a little ‘extracurricular activity’ after the whistle against the Saints. The scrum ended in two ejections and a suspension for Bucs’ receiver Mike Evans.

Mike Evans has been suspended ONE GAME 🚨 (per @AdamSchefter, via amyflurrywilliams/TT) pic.twitter.com/25dAIAbUQ5

Rookie safety Dane Belton made his presence felt in the first regular season action of his career.

The Giants’ fourth-round pick recorded a fumble recovery on the opening kickoff after the Carolina returner coughed up the ball.

Houston Texans linebacker Christian Kirksey demonstrated his leadership abilities on the defensive side of the ball against Denver.

The 30-year-old racked up five tackles, half a sack, and an interception on Broncos quarterback Russell Wilson in the Texans’ 16-9 loss.

Kirksey was named a captain in his junior and senior seasons in Iowa City and earned the same distinction with the Cleveland Browns and Texans throughout his NFL career.

Falcons tight end Parker Hesse had one of the more unusual paths to a roster spot this offseason. Hesse starred as a defensive lineman at Iowa, but converted to the offensive side of the ball as a rookie practice squad player with the Tennessee Titans.

Hesse made the tight ends room in Atlanta this offseason, making the 53 man roster against all odds. He rewarded the Falcons with a huge catch on fourth down to give Atlanta a fighting chance in their comeback attempt against the reigning Super Bowl champion Los Angeles Rams.

Down 14-0 in the second half on fourth and inches in the red zone, Falcons quarterback Marcus Mariota stumbled, recovered his footing, and floated a pass to Hesse past the sticks. Atlanta scored a field goal on the drive en route to a 31-27 loss.

Alaric Jackson stepped in for the Rams after starting right guard Tremayne Anchrum was carted off with a leg injury.

The 2020 undrafted free agent held down the fort for Los Angeles as the reigning champs narrowly hung on to a lead over the Falcons.

After the game, Jackson addressed doubters and naysayers on Twitter.

They said I could only play tackle 🙄 AZ ⏰

Jackson is expected to start at guard for the foreseeable future, as Anchrum suffered a broken left fibula.