The University of Iowa welcomes new University Counseling Services Director Dr. Michael Fletcher. Fletcher joined the staff in July. He said his goal is to meet the increasing demand for mental health services. 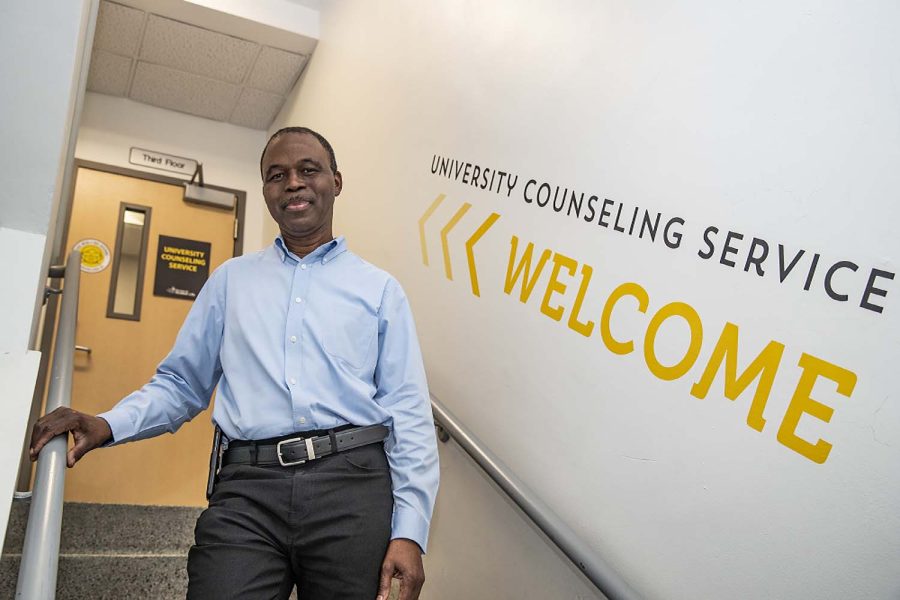 University of Iowa Counseling Service director Michael A. Fletcher poses for a portrait at UCS Westlawn in Iowa City on Friday, Sept. 16, 2022. Fletcher started in his new position as UCS director in July 2022 with 14 years of higher education experience. He said he enjoys helping people reach their full potential. “There’s something so gratifying about helping someone in need.”

University of Iowa Counseling Services welcomed Michael Fletcher as its new director in July, marking a switch in control for the program.

After five months without a director, the Jamaica native took the helm at both the west and east side campus locations.

Fletcher said growing up in a “collectivist community”— or a community that focuses on the needs of the people as a whole rather than the individuals — influenced him as an adult.

“I grew up with that mentality, that we build relationships and folks help,” he said. “Not only in times of crisis or disaster. Most folks come together during that time, but even just regular times we are celebrating.”

While growing up, Fletcher said certain attitudes were conceptualized and presented differently and in a more unique way than in most Western communities.

“One of the values that we have in Jamaica growing up is this idea of being productive and hardworking,” he said. “As a kid, I heard my mom and folks around the community chant this saying: ‘The heights by great men reached and kept were not attained by sudden flight, but they while their companions slept, were toiling upward in the night.’”

Fletcher said his mom was his greatest motivator over the years.

“She made the dedication and promise to herself that she was going to be there for us,” he said. “As a kid, I just thought that was a big sacrifice. The one way to repay her was to make sure that we were successful.”

“I must have answered about 100 questions from all the groups and individuals that I met with,” he said.

Fletcher said the pandemic gave people a lot of time to think about life, and that the most widespread issue that he sees regarding mental health is stress and, by extension, anxiety.

“Rightly so, people are hesitant in many ways as to what tomorrow is going to look like. And so, stress-related factors are the biggest things that I see right across the board,” he said.

Fletcher said his goal as the new director of UCS is to meet the increasing demand for mental health services.

One of the primary methods of meeting this demand is by the staff at UCS assisting students who suffer from stress caused by academic to environmental factors.

“That’s really critical because we can’t be taught by ourselves, nor do we want to be by ourselves,” Fletcher said. “… that’s the only way I think we’re going to be able to meet the ever-increasing demand. I think it also destigmatizes mental health when everybody starts to work towards improving mental health in the community.”

Barry Schreier, former UCS director and current director of the Higher Education Program in the Scanlon Center for School Mental Health, said he feels good about what he accomplished during his 30 years in various roles at UCS.

Schreier said he pinpointed anxiety as the number one presenting concern to counseling centers, with depression as number two.

“Anxiety and depression account for over half the reasons why students come to the counseling center,” Schreier said.

“The Counseling Center just has to manage what seems to be a bottomless need with simply just finite resources,” Schreier said.

Fletcher said he wants to break down any barriers that may stand in the way of the UCS building partnerships with these individuals.

“I am encouraging folks to reach back out,” Fletcher said. “…we want to serve you.”