The No. 5 Hawkeyes defeated the Hoosiers, 5-1, at Grant Field on Friday afternoon. Iowa has won its last five matches. 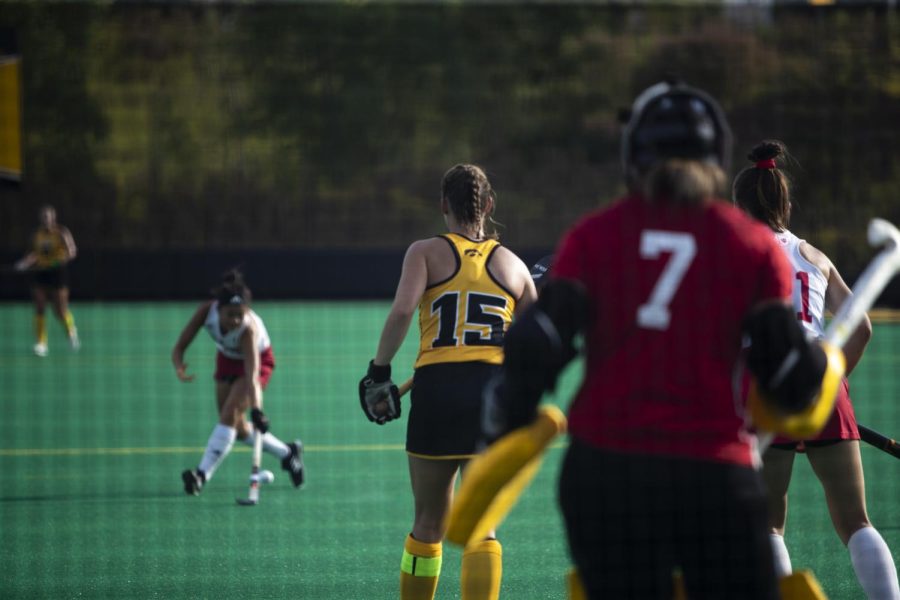 Iowa Senior midfielder Esme Gibson watches an Indiana player play the ball during a field hockey match at Grant Field on Friday, Sept 16. The No. 5 Hawkeyes beat the Hoosiers, 5-1.

“This is the best Indiana team we’ve seen in the past, like, 10 years,” Cellucci said. “We knew we were going to have a bit of a battle today, and we wanted to get out to a fast start in every quarter.”

The No. 5 Hawkeyes did exactly that in the first quarter. Seniors Lokke Stribos and Esme Gibson each netted a goal in the opening five minutes, and the Hawkeyes kept their two-goal advantage heading into the halftime break.

Gibson’s goal may have been the highlight of the day for the Hawkeyes. She and sophomore Annika Herbine had a two-on-one advantage against an Indiana defender, and Herbine passed the ball to Gibson for the score.

Gibson gave props for her goal to Herbine, who was credited with an assist on the play.

“I had every faith that she was going to pass me a great ball,” Gibson said of Herbine. “I just did the easy bit, and she did the difficult bit.”

In the second half, the Hawkeyes picked up where they left off.

Fifth-year seniors Laura Drees and Anthe Nijziel each scored in the third quarter, and Herbine responded to Indiana’s lone goal with an unassisted score in the fourth to push the lead to 5-1.

Cellucci said her team’s emphasis on earning and converting penalty corner opportunities was vital to the win, as the Hawkeyes scored on four of their ten penalty corners, compared to a 1-9 clip last Sunday in a 2-0 win over No. 20 Massachusetts.

RELATED: No. 6 Iowa field hockey shuts out No. 22 UMass for fourth straight victory

“[Our] forty percent corner conversion today was fantastic,” Cellucci said. “We would have been super excited with just thirty percent. We’ve been working on it all week, we threw a couple different corner plays in there. We knew they were going to throw a different defense at us, so our big piece was being ready for rebounds, and we executed fantastic.”

The Hawkeyes have won every game at home this season and Cellucci said protecting home turf is one of her team’s main objectives every year.

“Our goal is always to defend Grant Field, Cellucci said. “We feel like we have a little superpower with representing Dr. [Christine] Grant all the time here. It’s one of our goals every year, and we’re really glad to be able to keep a clean sheet here so far at Grant Field.”

With the absence of the Hawkeyes’ usual Sunday game this weekend, Iowa has a weeklong break from competition before Cellucci’s bunch head to Evanston, Illinois, next Friday to take on No. 1 Northwestern. The game will be the Hawkeyes’ first road trip in nearly a month, as Iowa has hosted its past five games.

“We probably know Northwestern better than anybody,” Cellucci said. “They are fantastic, number one in the country. We had a great scrimmage exhibition match against them earlier in August, and we feel like we match up with them quite well … They have world-class goal scorers, so our defense is going to have to be fantastic, top to bottom.”

The Hawkeyes will take on the Wildcats at Lakeside Field in Evanston on Sept. 23 at 4 p.m. The game will be broadcast on the Big Ten Network.