UI College Republicans are calling the actions hate crimes and calling for the BOR and UI to do more to prevent political violence on campus. 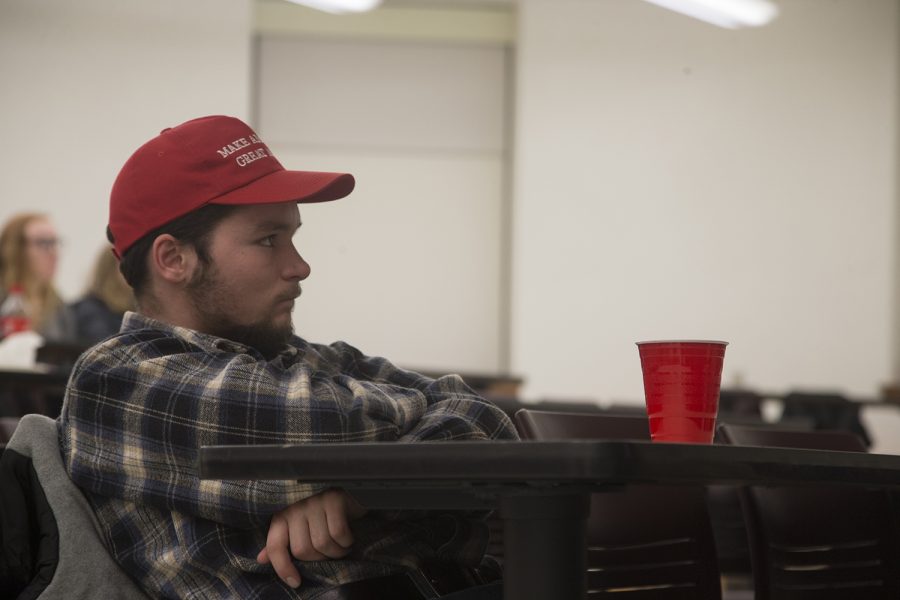 An attendee watches at a College Republicans watch party for the State of the Union address in Shaeffer Hall on Tuesday, February 5, 2019.

A member of the University of Iowa College Republicans is demanding the expulsion of a UI freshman after an incident at the Student Organization Fair.

Clare said the events of Aug. 31 were one example of political violence against conservative student organizations on campus. Clare is calling for more policy and discussion on how to ensure free expression on the university’s campus.

“We need the Board of Regents to strengthen free speech even more and to make an example of anyone who commits political violence for the safety of our students,” Clare said during a state Board of Regents meeting on Wednesday. “We appreciate the regents for always having the back of political minorities on our campus, because it can be difficult sometimes. I am confident that you all will continue to make Iowa a shining example of political discourse for generations to come.”

What Happened in August

According to Clare, the UI College Republicans were at the fair on Aug. 31, when a UI freshman approached their table and flipped the club’s table over.

Clare is calling the events a hate crime, under Iowa law.

“What happened to us that day is a hate crime under Iowa law. It is a scary situation that no student should ever have to go through,” Clare said at the regents meeting on Wednesday.

Clare and other conservative leaders of the student organization are calling for the student’s expulsion.

“We have made it clear that for our safety we want him expelled. Beyond that, I want to ask the board to do all that they can to aid political discourse on our campuses,” Clare said.

Clare said when the college republicans were attacked, the student compared the group to fascists like Hitler and Mussolini.

“Who else thinks that and who’s to say that they won’t turn to violence, too,” Clare said. “He was in Iowa for two weeks before he resulted to violence, and we have seen other students act out, too”

Clare said members of the student organization are fearful for their safety when expressing their political beliefs because of these recent events.

“I don’t want to have to spend the entire school year wondering if he, who is still enrolled at our university, is going to come back and harm our members any further than he already has,” Clare said.

Clare said this violence will not stop the club from being active on campus.

“I hope that anyone who thinks that they can intimidate us, that we are here to stay,” Clare said.

According to the University of Iowa 2021 Campus Climate Survey, certain social groups were less likely than most students to agree their social identity is respected. Of undergraduate students, 44 percent who identify as conservatives felt they were less likely to feel like their identity was respected on campus, compared to 75 percent of underrepresented minority students.

Clare said this was not the first time an event like this has occurred this year. According to Clare, a different UI student “whacked” and slammed his skateboard on a Turning Point USA table just the week before the fair. That student also disrupted a Young Americans for Freedom event last semester, Clare said.

“He showed up to a Young Americans for Freedom event calling them Nazis and the KKK,” Clare said.

This is one of many examples of a turbulent free speech environment on the UI’s campus, according to Clare.

“In the spring of 2021, members of the student government threw water on college Republicans chalking to shut down their free speech,” Clare said.

Freedom of speech has been an ongoing issue for Iowa’s three state universities ,with the regents requiring a Freedom of Expression training to be taught by the universities via an online course module on their Learning Management System.

Related: More than a third of students participated in free speech training

There have been several cases of conservative’s claiming their voices have been stifled at regent universities.

What the UI is doing

The UI is working actively with the UI College Republicans to come up with a solution to political violence, and to help ensure safe beneficial political discourse on campus, according to Clare.

The university is unable to comment on the registration status of the student involved with the incident on Aug. 31 due to education privacy laws.

Jeneane Beck, UI Assistant Vice President of External Relations in the Office of Strategic Communication, said in an email to The Daily Iowan that the UI police department are working hard to keep students safe.

“The UI Department of Public Safety works to provide as safe a community as possible for everyone,” Beck wrote. “All Iowa students are expected to follow the Code of Student Life, which sets standards for student behavior and conduct necessary to maintain a campus where ideas are freely exchanged, university property and processes are safeguarded, and conflicts are peacefully resolved.”

A criminal investigation is pending into the events of Aug. 31, according to Beck. The results of the investigation are not known at this time.

According to the UI Police log, law enforcement officers were dispatched to Hubbard Park at 7:30 p.m. on Aug. 31 for assault in violation of individual rights, disorderly conduct, and criminal mischief. The log shows all three cases under the same case number and in an active investigation status.

Josh Lehman, the regents’s senior communications director, wrote in an email to The Daily Iowan that the regents don’t control specific actions against students, however they support free speech on university campuses.

“The Board and the institutions take all allegations of threatening behavior seriously,” Lehman wrote. “We want our campuses to be places where all perspectives and voices can be heard in a safe, inclusive environment.”