The Iowa Board of Regents unanimously passed the fiscal 2024 appropriations budget that now heads to the Iowa Legislature for approval. 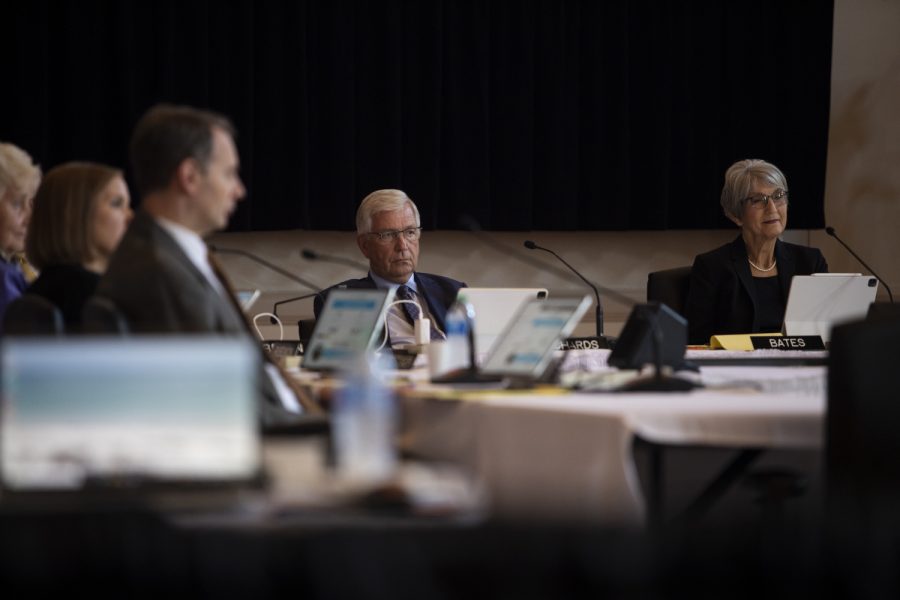 The Iowa Board of Regents unanimously passed its $630.5 million appropriations and operations request for its fiscal 2024 budget on Thursday.

At the meeting, $1 million was added to the request to increase the availability of mental health services on the three public universities’ campuses.

The budget included items that were funded by the state in the regents’ fiscal 2023 budget and new initiatives from the state’s public universities.

The University of Iowa’s budget included a $12 million increase from fiscal 2023, putting the university’s general education request at over $230 million, the highest request of all three public universities.

The UI’s additional funding will fund an increase in the number of nurses working in Iowa and a focus on resources for first-in-family college students if it is approved by the statehouse.

As previously reported by The Daily Iowan, the UI has four times the amount asked for by the University of Northern Iowa and six times Iowa State University’s asking.

RELATED: Iowa state board of regents  to consider $630 million in state appropriations approval

UI President Barbara Wilson presented the request to the board at the Thursday meeting.

“We are laser-focused on nursing,” Wilson said.  “People are calling on the need for more nursing not just in Iowa but across the whole country, and one of our requests is to increase the nursing workforce in Iowa.”

The additional $1 million added to the budget was passed on Thursday after Regent Abby Crow, who is also a fourth-year UI student, proposed an amendment to the appropriations request that would be allocated to the universities for expanded mental health services.

“In recognition of the concerns related to the need for additional mental health services expressed by our student leaders at the breakfast this morning, I would like to propose an amendment to the legislative request,” Crow said.

The regents met with student government representatives for breakfast, where mental health resources were a topic of conversation and concern.

Crow said in an interview with the DI it was very clear that mental health services are a huge priority with all three regents institutions.

“I’ve seen this through different talks I’ve had with student government leaders at each university and with all my personal experiences from being on campus knowing that the resources, wait times, and capacities were really kind of maxing out,” she said.

The initial idea came from Board of Regents President Mike Richards, Crow said.

Richards said in an interview with the DI that his discussions with representatives from the UI, ISU, and UNI led him to understand it’s something supported by students that needs more funding.

The legislative request will now go to the Iowa Legislature, which opens its 2023 session in January. It is unclear when state legislators will discuss or vote on the proposal.