Proposed renovations to the University of Iowa Memorial Union are slated to move Student Health and Wellness to the building. 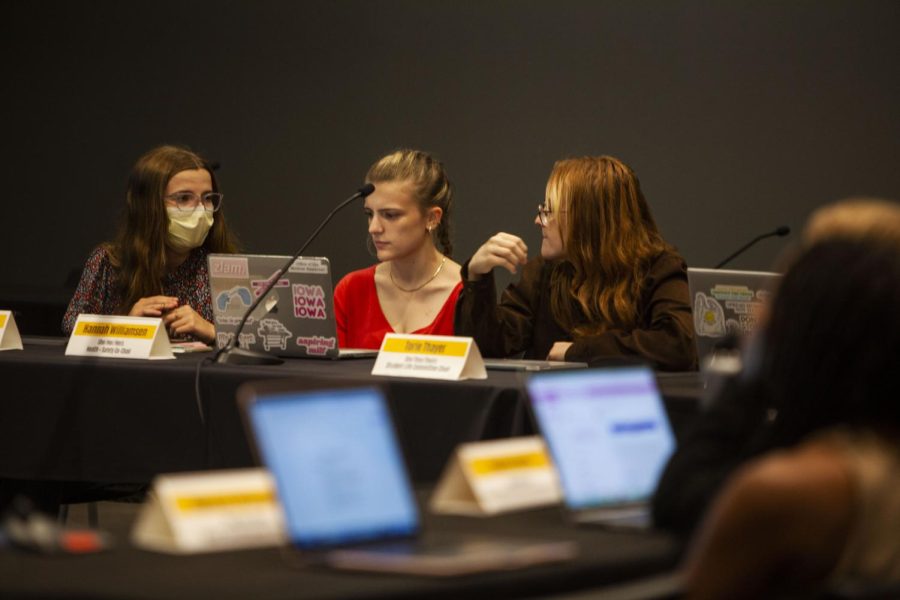 The Undergraduate Student Government held their weekly meeting at the Iowa Memorial Union on Tuesday, Sept. 6, 2022.

Proposed renovations of the University of Iowa Memorial Union move Student Health and Wellness into the building, aimed to increase student accessibility to services.

The construction, costing an estimated $63.7 million in phase one and $17.4 million in phase two, is slated for completion in 2025 following project approval from the university and state Board of Regents.

Undergraduate Student Government President Patrick Johnson said at a meeting campus administration about the renovations on Wednesday that the construction plans at the IMU will help bring student services to a centralized place in the IMU.

Johnson said USG and GPSG have been in close contact with the university groups such as the Division of Student Life and Campus Planning during this project.

Adele Vanarsdale, UI director of campus planning, said at a meeting with the UI Undergraduate Student Government on Wednesday that her department and the Division of Student Life have been wanting to figure out where to move the Student Health and Wellness building.

The service is currently housed in Westlawn, which is slated to be grazed.

In addition to bringing Student Health and Wellness into the IMU, UI Campus Planning plans to repurpose other existing space within the IMU to make more room for food service, administrative and faculty offices, meeting rooms, and spaces for affinity and student groups, Vanarsdale said.

“In order to accommodate those space needs, we’re looking at decommissioning the hotel,” Vanarsdale said. “So that staff has been notified of where we are with this process and will continue to run the hotel until we need to take it over for the construction project.

To finance this project, Vanarsdale said Campus Planning and Division of Student Life have talked about potentially increasing student fees.

Vanarsdale said an increase to $100 per semester was originally considered, but it was discovered that $120 per semester would greatly increase their funds, thus allowing more money to spend on student-related spaces within the IMU.

Before the increase can happen, it will need approval from the regents, Vanarsdale said. She later added that the fees will not occur until actual construction begins around mid-2024.
Additional campus projects
While the IMU was the main topic of discussion, Vanarsdale also said Campus Planning wants to move the four main cultural center buildings into Hubbard Park and construct a multicultural events center there as well.

Vanarsdale said the final move that Campus Planning wants to complete in the future is repurposing unused space in the Old Museum of Art building so it can be used for graduate students.